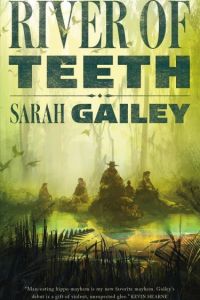 Do you want to know why I love alternate history? Its because you can write stories set in some of the craziest timelines imaginable and still have it be plausible because history is just that freaking weird. Case in point: River of Teeth by Sarah Gailey.

In our timeline, there was an audacious early 20th century plan to import hippos and settle them in America’s swamps and bayous so they could be bred and slaughtered as a means to address America’s meat shortage at the time. As you can probably guess, the plan was never carried out, but it could have worked considering there are already wild hippos in the Americans thanks to Pablo Escobar (and I’m not joking about that). What Gailey did in River of Teeth was to take that idea and have it happen in the 1850s.

A “Hippo Boom” spreads throughout the southern United States as people try to make it rich as hippo ranchers. By the 1890s, however, this has caused the South to be a lawless region where hippo-riding rogues move unchecked and man-eating feral hippos swarm “The Harriet” (a Louisiana swamp created after the federal government damned the Mississippi) making the area a lawless zone where the federal government has little to no authority.

Enter Winslow Houndstooth, a former hippo rancher turned mercenary, who has been hired by the federal government to take care of the feral hippos in The Harriet. Although initially tasked with capturing and relocating the hippos one by one, Winslow thinks he can do a better job by using explosives to herd the ferals en masse to the Gulf of Mexico. Thus with his team of hippo-riding bandits (which includes a cross-dressing con-woman, a non-binary demolitions expert, a Hispanic assassin and a gunslinger who Winslow has sworn revenge on) Winslow heads for The Harriet to carry out his caper (excuse me, I mean operation). The problem is the crime lord who rules The Harriet likes having his feral hippos around and he won’t take kindly to anyone interfering in his kingdom.

River of Teeth embraces the high concept ideas that any good alternate history is known for. It took a crazy idea like hippos being bred for meat in America and took it to its logical conclusion to create a believable southern Western in the vein of Quentin Tarantino’s Django Unchained. I especially liked the world-building involved such as the lingo created to describe life with domesticated hippos and changes to towns to make it easier for hippo riders to park there river horses. On top of that the main cast of characters were a pretty diverse group in terms of race, ethnicity, sexual orientation and gender identity; which is something one doesn’t see often in mainstream alternate history.

For example, one character when not called by name is referred to as they/them. Throughout the story I was waiting for this to be addressed at some point…but it never was. And you know what? I realized it wasn’t important. I’m sure it was addressed among the characters, but would that help the plot at all or would it cause the story to come to a screeching halt? I usually wouldn’t say this, but I’m happy it was never addressed. It made the story better.

Does that mean River of Teeth is perfect? Well, no. Unfortunately I found the romance that developed between two characters to be a tad over the top. It wasn’t enough to take me out of the story completely, but some of the language used seemed more appropriate for a trashy romance novel rather than a heist book set in the hippo infested swamps of Louisiana.

Still I can recommend River of Teeth to anyone who loves alternate history or just a good story in general. The book truly embraced how weird our history has been and how much weirder it could have been.