In this week’s viewing: Which shows look like they have what it takes to stay in the commentary lineup for the rest of the season? 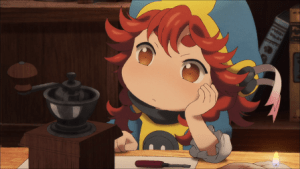 Hakumei and Mikochi #2 – This is going to be that show that always comes out sounding wrong when you try to describe it to recommend it to your friends. Consider: In this week’s episode, Mikochi is chosen as a harvest princess in a ritual originally intended to appease the local spirits. Then the friends go fishing, only to be attacked by a giant zombie fish and encounter the person who reanimated it. Then they have to deal with a haunting at their shopkeeper friend’s place.

And yet all this happens in such a relaxed and cheerful manner. No one is seriously threatened (unless you count Konju’s ego), and everything works out fine in the end. Hakumei and Mikochi isn’t trying to tell a story for thrills, just to illuminate its world and share its characters’ lives.

In two episodes, this has become the best show happening this season. 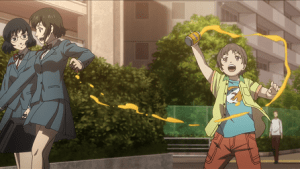 Kokkoku #2-3 – Nobody fully understands how Stasis works, and it’s causing unpleasant surprises for everyone. Not least the villains, whose evil masterplan apparently hinged on killing frozen people (because every cult depicted in anime since the Aum Shinrikyo attacks has been part of a plan to kill people). Turns out you can’t do that, or the Herald will appear and squish your head. But the Herald is shrinking, meaning perhaps it can be made to vanish, if there are enough cultists and thugs to keep it busy.

One possible flaw in the new plan is that Grandpa says the Herald may have been one of the Yukawa family’s ancestors. Which implies that it’s entirely possible for someone else to mutate into a Herald by unknown means.

The Herald’s connection to the Yukawas may also explain why the Spectres released by it found their way (or were sent) into Tsubasa and Makoto. Now the two of them are stumbling around with no information at all, though Makoto seems to be taking it well. Tsubasa’s thought about protecting Makoto may have been the funniest moment of the show so far, but visualizing Makoto turning out like himself raises the question: Is there a childhood trauma underlying Tsubasa’s shut-in lifestyle? Maybe that ritual that it seems like everyone was subjected to when they were younger and Juri only just remembered?

Another big question is, where does Majima fit into all this? With her knowledge of the Yukawa household and past familiarity with Stasis, I thought for sure she’d turn out to be Juri’s sister, but Juri doesn’t recognize her as such.

There are some especially dodgy art moments in episode 2 (and the constant replays of the head-crushing are probably the result of not getting some other animation finished), and the end credits sequence is still the worst, but Kokkoku is doing spectacularly on the story front. This is worth following to the end. 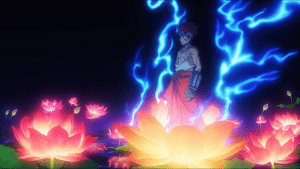 Hakyu Hoshin Engi #2 – After the debacle of his attempt to remove Dakki directly, Taikōbō decides that the only logical course of action is to become a hermit and take up fishing. This lasts until he is violently pulled into the center of a complicated family dispute involving a miraculous birth, an even more miraculous reincarnation, and meddling by a good friend he hasn’t seen in 300 years. (This explains in passing why Taikōbō chooses to use washi for his “I” pronoun, something stereotypically done by old men.)

Meanwhile, Dakki senses a threat from her advisors Bunchū and Hiko, so she sends Bunchū off to put down a rebellious king, and gets rid of Hiko in the meantime. Bunchū and Hiko are good friends, having bonded during an attack by a rampaging xenomorph queen, but it appears they will be fighting each other at some point in the future.

The one serious flaw in Hakyu Hoshin Engi at this point is its inability to stick with a plotline for more than about two minutes. All the frantic cutting back and forth between locations, flashbacks, and flashforwards feels like it’s anxiously trying to reassure viewers who are just here for some magical martial-arts smacking down that there will in fact be fighting soon. But there’s plenty that’s interesting about the story and setting anyway; if it could just calm down a bit and get out of its own way, it’ll be fine. 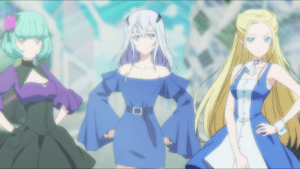 Beatless #2 – The minute Arato’s back is turned, little sister Yuka gets Lacia scouted as Japan’s next top android model. Along the way, we learn that Arato’s dad is a noted roboticist. (Place your bets now on whether Arato and/or Yuka will turn out to be androids themselves.) Vaguely worrying things are said about the use of androids as a means of social control. Lacia has ethical or safety concerns about inadvertently passing as human, but Arato dismisses them. And meanwhile, Arato’s buddy with the robot-hating family turns out to be up to something extremely sketchy, and he’s just attracted the attention of one of Lacia’s fellow escapees.

There are still some potential holes in this setup, like, if Lacia is so easily identified and tracked, why hasn’t she been recovered by her builders? If androids are plentiful and can apparently work at any job, why does any human outside the Luddite minority still work? But Beatless has gotten much better in this episode. If the novel started with the author wanting to play with a popular trope, this is where he seems to have decided that the best way to get a good story out of it is to run away from the things that usually come with that trope as quickly as possible. This may yet turn into some serious idea-driven sf. 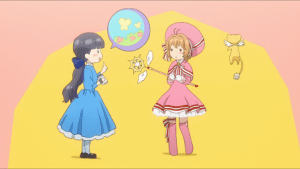 Cardcaptor Sakura: Clear Card #2-3 – Sakura’s first few days of middle school go fairly well despite occasional interruptions from attacking cards and the mysterious figure from her dream. The figure is her height, implying someone around her age, like, oh, say, that mysterious transfer student in the preview for episode 4. Meanwhile, Syaoran has been up to Mysterious Things he isn’t going to reveal anytime soon, and Sakura’s big brother has suspicions about Kero but probably isn’t going to say anything anytime soon. This show is going to run for six months, so it can’t have too many developments at once.

So instead, it fills its time with the minutiae of school life. Every episode, we must be reminded which club every person in Sakura’s friend group has joined. Interactions between Sakura and her closest friends start getting repetitive. Tomoyo’s stalker schtick in particular has already gotten annoying.

This show really is aimed at kids the age of the main characters, and isn’t bothered about entertaining anyone else. I think this is where we should let it be.

With no news about a simulcast for the new season of Saiki K., that’s it for the new shows and time to set the lineup. Hakumei and Mikochi and Kokkoku are already great, and Hakyu Hoshin Engi is showing signs of potential greatness, so they’re in. While I’m not convinced about Beatless, it is definitely improving, and between that and its Seiun connection I can make the case to keep going with it. So it’ll be those four to keep us company the rest of the season.

If it Ain’t Broke

Of course, one of the great things about magazines, as with anthologies, is exactly the unexpected, the little surprises, the unknowns whose work thrills you

One screen good, three screens better? Not, as Ira Nayman found, in the case of a screening of Star trek: Beyond in Barco Escape.

The Most Recommended Novels: Now with 25+% Genre!