Breaking news: Anime Strike is no more! If you’re in the United States, you can now watch any of Amazon’s anime streams on plain old Amazon Prime, just like the rest of the world.

Don’t worry, my fellow Americans, we might still have something to complain about. Even as this post goes live, most of the world is finding out whether Netflix listing January 11 as the start date for Violet Evergarden means it’s finally figured out how to simulcast, or if it’s all a massive clerical error. If there’s a simulcast, guess who’s being left out? Australia and the US. 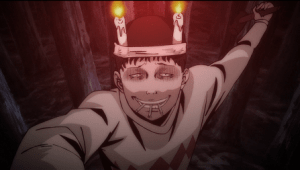 Junji Ito Collection premiere – Sōichi is a high school student who thinks very highly of himself and has an unusual hobby: in the dead of night, he goes into the local forest to cast curses on his classmates. Sometimes it’s for revenge, sometimes it’s out of a twisted notion that he’s helping someone. In his spare time, he collects animals to gross out his sister with. But the owner of the forest is on the warpath…

…and… none of that really pays off. It’s a quirky little slice-of-life horror story about a guy who isn’t half as awesome as he thinks he is, but without a satisfying comeuppance, just mild blunders. There’s also none of the grotesque body horror Junji Ito is known for, although this reviewer admits to being grateful for that.

Not to worry, Ito fans, as the swingin’ opening credits sequence promises much grosser things to come. If you get your thrills from that, and aren’t too concerned with other aspects of the writing, I guess it’ll be fine. 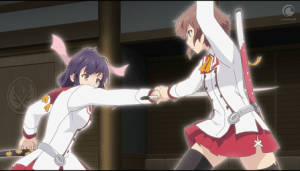 Katana Maidens ~ Toji no Miko premiere – As Japan is occasionally invaded by giant demonic beings known as aradama, it maintains a force of sword-trained schoolgirls to fight them off. Kanami and Mai are two such girls who are the top fighters in their school, so they head to Kamakura to participate in an intramural tournament. There they meet a girl with a hidden agenda which is about to render the whole tournament plot irrelevant.

Katana Maidens is trying, but the pieces never quite fit together. For instance, it spends a lot of time with the girls on their way to the tournament to try to flesh them out, but they just come across as collections of standard character quirks. Kanami is the Cheerful Girl who is Totally Disorganized and Eats A Lot. Mai is the Rich Girl, but she’s also Quiet And Nervous Girl who Loves To Cook. Kanami also has a Special Connection to the Mysterious And Sullen Girl who provides the twist at the end and who I’m already wishing was the actual protagonist.

Attempts at character development are dragged down in any case by the attempts to keep its target demographic happy. Swordfights are an opportunity for the sort of geekery that allows lots of jargon to be flung around, but not in a way that educates viewers who are new to the topic. There is a completely unnecessary bath scene. Though it shows a spark of life at the end, I don’t expect this show to greatly improve. 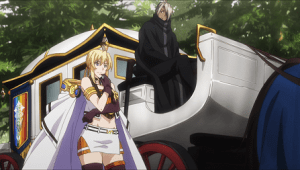 Record of Grancrest War premiere – Ryo Mizuno is famous for having novelized a Dungeons & Dragons campaign to produce Record of Lodoss War. Freed from the strictures of D&D, though, what could he come up with? A new series developed in parallel with his own RPG, and boy is there no attempt to disguise the fact.

This is the story of a mage and a rogue who meet up with a low-level fighter. The mage decides she likes the fighter, so she conjures up a monster he can fight for a massive number of experience points. Once he’s leveled up, he can now have a follower, so the mage pledges herself to his service, and then they go off to the mansion of the local warlord and rules-lawyer their way into taking it over. Also, there is a prologue about a royal alliance that goes horribly wrong because no one anticipated that there might be a problem with holding a wedding in front of a major demonic artifact.

The setting is Generic Medieval Anime Fantasy Land, which means the background characters are wearing a grab bag of costumes from throughout European history, and the main characters have ridiculously overdesigned outfits. The excuse for putting the mage in a tiny top and a miniskirt is that she was on her way to serve a skeevy lord, but somehow she forgets to change when she has the opportunity.

Aside from a few stylish moments around the demon in the prologue, the animation is barely adequate and the art is nothing special. There are absolutely no grounds for recommending this show in any way. 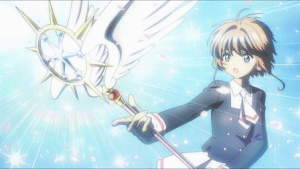 Cardcaptor Sakura: Clear Card premiere – Sakura Kinomoto is just starting middle school. She’s in the same class as two of her good friends, and her not-quite-boyfriend from Hong Kong has unexpectedly returned to Japan to stay. What could possibly bring her down now? Well, how about a dream where a mysterious figure attacks her, the disappearance of the magic from the cards she so painstakingly gathered a few years ago, and the news that she must start a new quest?

Since this is a sequel, Sakura is refreshingly spared the obligatory bumbling around that traditionally starts a series. She has friends she can trust and allies she can consult, and she does so without hesitation. There is a substantial cast of likely recurring characters here, but the brand-new viewer will have been able to largely sort out who’s who by the end of the episode.

This is a solid effort without much to complain about, although I will point out how it’s supposed to be funny that one of Sakura’s friends is obsessively stalking her with a video camera. Then again, magical girl shows are about personal growth as much as anything, so maybe we can hope that will be addressed over time. Definitely worth a second look. 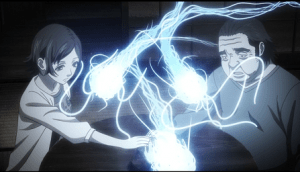 Kokkoku premiere – Juri Yukawa has just graduated from college and can’t wait to get a job and escape her family, particularly her grumpy grandpa, her sad unemployed sack of a father, her 31-year-old shut-in brother. The only person she respects is her older sister, raising a toddler, Makoto, of unknown paternity all by herself. But then Makoto and Juri’s brother are kidnapped, and the Yukawas are given an impossible deadline to raise a ransom. And then Juri’s grandfather pulls her and her father into a ritual that can stop time…

That barely begins to cover what happens in this episode. There are enough twists and enough exposition to supply three or four episodes of a typical show, but it’s all so smoothly done that it never feels rushed.

The world Juri and her family are dropped into feels solidly constructed, and the Yukawas are atypical and engaging characters. There is only one small blemish on what is otherwise the knockout winner of the premieres so far: the ending credit sequence. Because apparently someone involved in this project worried that people wouldn’t stick around for a spectacularly well-written sf thriller unless they also got to see the heroine in lingerie and then topless.

Despite that, this is a shoo-in for further blogging.

A slow start here, since Shinkalion looks like it won’t be simulcast, and Crunchyroll only just licensed the continuation of Overlord and hasn’t posted the premiere yet. But two shows so far that deserve a second viewing, and lots more premieres coming next week!