This week I’m covering new and older science fiction romances with a winter, snow or winter holiday theme. What inspired me to talk about this topic was a series of four SFR’s released in November this year by author Starr Huntress with various co-authors, each with the theme “snowed in.” Her most recent, with Aerin Caldera, was Snowed in with the Alien Pirate. Here’s the story: When Captain Jenny De Rue’s ship is commandeered by the intergalactic police to transport a dangerous fugitive to a secure prison, she’s only concerned that her perfectly boring drop mission is going to be delayed and her crew will lose out on their delivery bonus.

But when the mouthwatering seven foot alien pirate wrapped in chains stepped onto her ship, she never thought finishing her drop mission would be the last thing on her mind.

Or that she’d secretly follow him into the brig.

Or that in the midst of the most mind-blowing orgasm ever, he’d use her to break out of prison and take her with him as a hostage down to the frozen planet of Ca’ana. 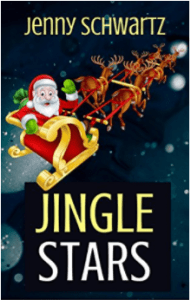 Another very recent holiday-themed release is Jenny Schwartz’s Jingle Stars (Shamans and Shifters Space Opera Book 4), which has this inventive and seasonal plot: When a starship decides to play Santa Claus… Ahab is a mLa’an artificial intelligence embedded in the starship, Orion.  The campaign for AIs to be recognized as full citizens of Galaxy Proper is within reach of its extraordinary goal. The only thing that could stop it now is if an AI did something foolish…like take a space station hostage to save eight orphaned children.

And this is the letter to Santa that starts it all:

I don’t know if your reindeers work in space. But if you have room in your sleigh after you finish delivering presents to the lucky kids with parents and homes, can you come and get me and my friends? Please?

We’ve been good. Well, we haven’t been really bad. We’re on Station Elphame, in the junkyard, and Zoeis sick. She’s bad sick. I think she’d be better on a planet. We don’t need presents. We just need a way out of here. Ollie tried to sneak onto a trampship…he died.

Please, Santa, I don’t want any more of my friends to die. 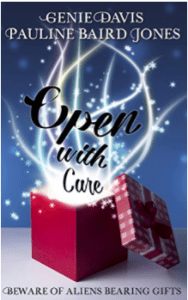 I asked the authors of the SFR Brigade for further winter or holiday recommendations. First up is Open With Care by Genie Davis and USA Today Best Selling author Pauline B. Jones. With a tag line like “Beware of aliens bearing gifts,” here are the summaries of the two stories in the volume:  “Riding For Christmas”: A mesmerizing tale of interstellar time travel and romance! Jane MacKenzie, visiting her grandfather’s abandoned ranch, discovers something in the snow. When she opens the ribbon-wrapped box, it mysteriously returns Sam Harrington, who “disappeared” in an 1885 blizzard. There’s nothing alien in this enduring tale of holiday homecomings and the hope of love that lasts a lifetime.

Gini knew Christmas in Wyoming would be challenging as she headed over the frozen crick and through the woods to the family cabin. The lights are going out in her mom’s attic, the guy who broke her heart is on the porch…and there are aliens on the roof. According to her mom, it’s going to be the best Christmas ever. 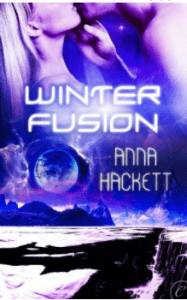 USA Today Best Selling author Anna Hackett says her ‘first ever SFR was set on a snow planet during a winter Yule holiday.” The blurb for Winter Fusion: Ex-space marine Savan Bardan survived the Galactic Wars to become the most ruthless trade negotiator in the galaxy. His planet needs energy to survive, and he’ll do anything to close the deal for the Perman fusion crystals that can provide it—even if it means seducing his beautiful, infuriating opponent, a rival icier than her planet.

Perma’s top negotiator, Brinn Fjord, lost her father when Savan delayed her planet’s Trade Guild membership years ago. She hates the handsome Rendarian and the planet he represents. She’s determined to finish the deal and get rid of him as quickly as possible, so she can celebrate the holidays.

But soon the rival negotiators are in a fight for their lives. Besieged by mysterious accidents and unforgiving weather, Brinn and Savan have no one to depend on but each other. As they put the past aside, they uncover a desire hot enough to melt ice, and Brinn discovers a secret that may keep them apart. 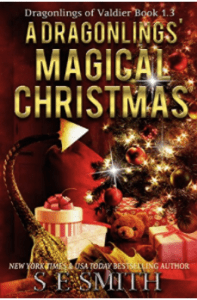 New York Times and USA Today Best Selling author S. E. Smith has two holidays tales to offer, describing them as “two heartwarming stories of love, friendship and discovery” – The Old Dragon of the Mountain’s Christmas and A Dragonlings Magical Christmas. Here’s the plot for the latter: When Ariel mentions another human holiday, the women get excited. They aren’t the only ones, though. The Dragon Lords, Vox, and Ha’ven decide they want to be part of the planning this time. Things get a little out of hand when the men begin competing with each other to create the best Christmas ever for the Dragonlings, Roam, and Alice. Fuelled with tales of St. Nick, Rudolph, Frosty, and the newest tale of the Old Dragon of the Mountain, they are determined to light up the palace like never before and turn it into the new North Pole.

Just when the women think they have everything under control, panic ignites when the Dragonlings, Roam, and Alice suddenly disappear just days before Christmas. What no one expects is for the children to take it upon themselves to go search for the legendary dragon who has threatened to steal the Magic of Christmas.

Now, their parents are in a race to find the Dragonlings before they lose them forever. Will they be able to find them and celebrate the magic of the season or will the Dragon of the Mountain keep them hidden forever?

Alien Mine by Marie Dry is set “on a futuristic Earth during a heavily snowed in winter.

Rinelle Grey’s Forbidden Planet involves a hero who crash lands on a planet, then is trapped there with the heroine by six months of winter.”

Cassandra Chandler has an SFR free short story on her website entitled “A Homeworld Holiday”. Here’s the synopsis she provided: From an Earthling’s POV as he meets a woman who seems really into the season, and yet doesn’t really know anything about it. Or coffee. Or kisses under the mistletoe. They meet going for the last fruitcake in a 24/7 shop on Christmas Eve and form a lasting bond as he shares information about the season, “pretending” that she’s an alien, since her reactions are so odd. At the end, you see her return to her spaceship, hugging her “fruitcake” (the most beautiful nutrient brick she’s ever seen!) and heading back to the alien base of operations on Earth.

Cathy Pegau says “all of my SFR’s are set on the icy cold planet of Navarro.” Her titles are Rulebreaker, Caught in Amber and Deep Deception. 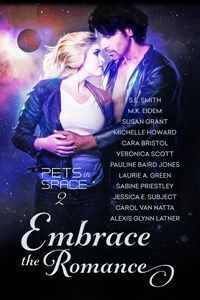 And Carol Van Natta points out that her story “Pet Trade” in the award winning, USA Today Best Selling anthology Embrace the Romance: Pets In Space 2 “is set in the wintry northern latitudes of a frontier planet, and involves winter Solstice Day gift-giving. Logline: A cargo of designer pets forces a damaged veterinarian and a fugitive elite forces veteran to work together to protect their animals and the town from greedy mercenaries.”

Do you have any favorite SFR’s (or science fiction in general) set on snowy worlds?

Remember those books about genre movies?

In this week’s viewing: The Pilot’s Love Song fills in some continuity, Nobunagun goes more nuts than ever, and more!

Although I’m sure that there’s certain decorum for writing blog posts that prohibit fanboy type moments, I am choosing at this point-if such rules do exist- to completely ignore them. I do not have nearly enough verbage to clearly explain just how cool it is that I have been invited to be a part of […]

A Fan Letter to Rooster Teeth