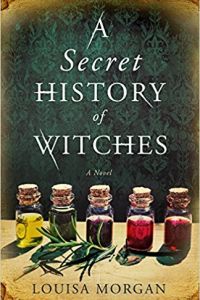 Occasionally you need to step outside your comfort zone and read a book that is not for your “demographic”. Sure, it might end badly, but you also might be pleasantly surprised. That is what happened to me with A Secret History of Witches by Louisa Morgan.

A Secret History of Witches tells the story of Orchieres clan from 1821 to the end of World War II. They are a clan of French-speaking Roma who are also secretly witches (hence the title). Magical powers are passed down genetically from mother to daughter (apparently males are never born with this gift). Much of their witchcraft seems similar to Wicca, but don’t quote me on that. Through the point of views of various mother/daughters, we watch the Orchieres, among other things, flee Brittany for Cornwall to avoid a witch-hunter, marry into the Welsh aristocracy and use their gifts to battle Nazis.

As the title suggests, A Secret History of Witches is a secret history. Despite the existence of magic, history tends to play out exactly the same. This is due in part because most witches need to hide themselves to avoid persecution, something that even persists into the 20th century despite witch burning having gone out of style. There is at least one person of historical interest who turns out to be a secret witch (and I won’t spoil who it is, but anyone who watches The Crown might be able to harzard a guess), but again this doesn’t change what we know of them overall.

There is, however, a brief alternate history moment near the end of the book where a non-Orchiere witch gets a vision of a Nazi occupied Britain complete with concentration camps and Edward VIII back on the throne with Wallis Simpson officially as his queen. Admittedly I am a little confused about the timing of this vision, but it seems like it happened in 1944, shortly before the Allied invasion of Normandy. Seems unlikely things could be so desperate, especially with Allied troops marching up Italy and Soviet forces entering Germany proper in the same year, but its a minor nitpick overall.

On the whole I enjoyed A Secret History of Witches. Stories about the importance of family always resonate with me because its something I was always taught as a kid. Granted that’s a minor theme of the novel. The major theme is the secret strength women possess (with magic just being a metaphor for it) and how men are deeply afraid of it. As time goes on we see the Orchieres evolve as they use their gifts first to protect themselves and then more assertively as they seek to get things they want, whether its a child or wealth and title. I also liked how developed all of the Orchieres are. None of them are exactly perfect. They make mistakes and at times hurt those they love. One is even, and there is no better way to put this, just a terrible person and I’m OK with that. Not every protagonist needs to be a hero and every family has their black sheep.

I am a tad disappointed though that the story stopped in the 1940s. It would be interesting to see how the use of magic continued to evolve as history marched on. For example, how would the use of magic be changed during the women’s liberation movement? Would magic seem that spectacular or needed in a world where we are all instantly connected to each other and the collected human knowledge through a machine that fits in our pocket? Would magic even still be necessary in the 21st century? Questions like this would have been fun to tackle, but alas the story ended before we could get to it.

Nevertheless, I can still recommend A Secret History of Witches. Its an entertaining historical fantasy told through a family drama that lasts over several generations. Pick it up if you want a spell to take away your boredom.