Last week we talked about Christian Kallias’ artwork, which is just phenomenal. If you didn’t see the beginning of this interview I recommend going back and taking a peek.

This week I asked Christian to talk about his novels. 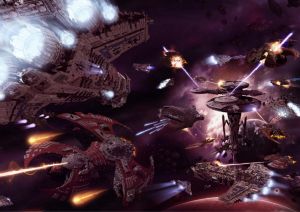 What have you published?

I’ve published 10 full-length Sci-Fi novels and a novella. Ten of these are in the same universe, the Universe in Flames bestselling series (120k copies sold to date).

Another thing I very much enjoy is writing novellas, novelettes, and short stories to flesh out some of my secondary characters. Ryonna’s Wrath occurs between Books 1 & 2 in the series timeline (it’s free on Amazon). There’s also Damocles Fall, the novelette following Spiros (secondary character) and his time on Damocles-3 as the Obsidian Empire start their systemic annihilation of the Star Alliance. Up until now, you could only get this book through registering to my spam-free mailing list, but I decided to include it in my last book (Into the Fire Part I: Requiem of Souls) for everyone to read. It’s a fun romp, and while writing the Spiros part of this new book, I thought it would make sense to include Damocles Fall in it as well.

I have also completed a short story that should be released this November in Steve Beaulieu’s Collateral Damage Anthology. For that particular story, I’ve revisited my other universe, Rewind (cyberpunk meets time travel), and have written a prequel short story to the events of Rewind 717.

I have some additional short stories that will be released in the next couple of months, so I’m excited about those as well and for my readers and fans to see another side of my storytelling and me.

I’m putting the final touches on my Universe in Flames series as I’m currently writing book 10 that will close that specific arc. I want the conclusion of this story to be as epic as I have ever envisioned it, and we still have a lot of ground to cover. There will be some exciting surprises along the way. I intend on developing that universe further by releasing both a prequel and sequel series in 2018. I also intend on re-launching and continuing my Rewind Universe soon.

I was busy creating covers for other authors, too. There are four books out (or on pre-order) on Amazon with my cover artwork. These books include:
The Long March by Richard Fox
Pew Pew! The Quest for more Pew (Anthology #2) by M.D. Cooper
Pew Pew! Bite my Shiny Metal Pew (Anthology #3) by M.D. Cooper
The Expanding Universe #3 Anthology by Craig Martelle
And I’m almost done with the cover of #4 of Craig’s Expanding Universe Anthology.
I’ll also have a story featured in Craig Martelle’s Expanding Universe #3, as well as one of the upcoming Pew Pew! Anthologies. I’ve had a lot of fun doing the artwork, and I’m looking forward to creating a few more for other authors in the future.
Below are 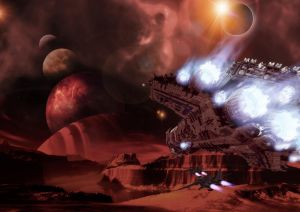 a couple of examples of the sort of artwork I’d like to create to flesh out the Universe in Flames saga.

Here is an excerpt from Book 10 (to be released this month):

Chase dreaded going to the Underworld, but he couldn’t avoid it. He had to tell his grandfather what had happened to Oryn. And even though Chase had insisted that she not engage Arakan on her own, he was forced to admit that she had managed to bring the Supreme Commander of the Furies down, with Poseidon’s help. Something Chase didn’t think she would be able to do.
Chase tried taking some comfort in that fact. And, in her last moments, she had at least achieved what she set out to do, which was to avenge the death of her parents. Even if that achievement was short-lived. None of them could have anticipated what would follow. Though, Chase now wondered if his hesitation to go to Erevos in the first place wasn’t simply his instincts telling him that a larger threat loomed there.
It mattered not, anymore. Oryn was dead, and the Spectre had swallowed her soul, and in doing so, he had inherited all her powers. That’s what scared Chase the most about their new foe; this ability could potentially make the enemy stronger with every kill he made.
But more than ever, Chase vowed to himself that he wouldn’t let anymore of his friends die in this war. They had lost too many good people. He needed to come up with a way to defeat both the Furies and the Spectre without losing another member of his team.
Chase took a deep breath. He still couldn’t believe Oryn was gone. He wondered if she would be in the Underworld, but he had seen the Spectre grab and assimilate her soul, so he doubted it. Her last words haunted him. “Thank you for your friendship,” she had said. Chase didn’t think letting her die made him a good friend at all.
No, Chase didn’t want to go to the Underworld and tell his grandfather that he had let her die. But there was no way around it, and he needed to get other things moving fast, so he had to deal with it now, no matter that he’d rather teleport to the other side of the universe and crawl into a deep black hole instead.
Chase closed his eyes and teleported to the Underworld.
Zeus appeared shortly after he arrived in the cold, dark place. After having been here several times, Chase still felt that the place was uninviting. No surprise Hades wanted to get the hell out, especially after having spent tens of thousands of years here. Chase didn’t like how the Underworld made him feel after only a few minutes of being there.
“Hello, Chase,” greeted Zeus. “I take it that Oryn still didn’t want to come and see me?”
The sadness in Zeus’ tone tore at Chase’s heart. How was he to tell him that his daughter might never come here? Perhaps if Chase killed the Spectre, it would release her soul, but he had no way of knowing that at the moment.
When Chase pressed his lips together and couldn’t articulate even a single word, Zeus’ entire face dropped.
“What— what happened?”
“I don’t know how to tell you this.”
“Tell me anyway, though I can sense that it has something to do with my Oryn. Is she mortally wounded like Poseidon was?”
If only, thought Chase. A tear ran down Chase’s cheek.
“She— she’s gone, Zeus; I’m so sorry. I tried to prevent it but. . .”
“What? No! That’s not possible; if she had died, I would have seen her soul. You must be mistaken.”
“I’m afraid I’m not. I take full responsibility.”
For a second, Chase thought he saw hatred in his grandfather’s eyes, which made his heart bleed. Chase was mad at himself, as the last thing he wanted was to lose yet another comrade, and while Oryn had been insufferable and disobedient before her passing, she was still someone he considered a friend. The anger in Zeus’ eyes was quickly replaced by sadness and sorrow as the leader of the Olympian people fell to his knees.
“Tell me this isn’t true. Tell me I’m just having a nightmare.”
Chase knelt next to his grandfather and laid his hand on Zeus’ shoulder.
“I wish that too, every minute since it happened.”
“Is Arakan dead?”
Th 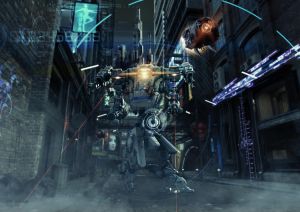 at’s when it occurred to Chase that Arakan’s soul hadn’t come to the Underworld either. If Zeus hadn’t seen the supreme commander’s soul, it meant whatever had happened to Oryn must have happened to Arakan as well. The Spectre probably had hijacked both his body and his soul.
“Not exactly.”
“You’re not making any sense, Chase. What the hell happened?”
Chase told his grandfather everything that had occurred in as much detail as he could.
“But she did kill Arakan,” said Chase, “before the end.”
“Is that supposed to make me feel better, Chase?”
The resentment in Zeus’ voice was hard to miss, and Chase accepted it. In his heart, he knew very well she had been in an unstable frame of mind, and he shouldn’t have taken her with them on the mission. Once more, Chase had not listened to his instincts, and someone had died because of it.
Zeus shook his head and turned his back on Chase.
“I’m sorry,” attempted Chase.
Zeus swiftly raised a hand.
“Don’t— please, Chase, I— I need to process this. You should get out of here before I say something I might regret.”
Chase frowned but respected his grandfather’s wishes and left the Underworld.

Where do you get your ideas for your novels? Your artwork?

I write about things that I love, so you’ll find a melting pot of influences in my stories. I am fascinated with space and Science Fiction in general. As a teenager, I was forever imagining stories, enjoying video games, and creating various art projects. With my sight always set towards the stars, my novels reflect many of my favorite things, like Star Wars, Star Trek, Babylon 5, and Stargate. I have fond memories of playing games like Wing Commander, a fact that should be apparent in my depictions of dogfight scenes.

As for my artwork, I just usually get an idea in my head, fire up Photoshop, and let my imagination take over.