All Our Wrong Todays is one of those rare alternate history books in which our present is the dystopia compared to the alternative. And it’s a lot of fun! 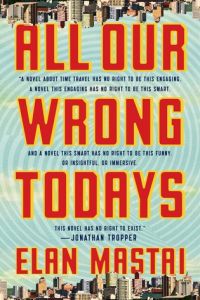 I was informed that All Our Wrong Todays by Elan Mastain was nominated for the Goodreads Choice 2017 Best Science Fiction and Best Debut Author awards. Since I had a copy sitting in my to read pile since July, I figured now was as good a time as any to finally read it and see what all the fuss is about.

All Our Wrong Todays begins in an alternate timeline where a Lionel Goettreider invents his “Goettreider Engine” on July 11, 1965. This invention produces free energy and sparks the creation to the techo-utopia that 1950s sci-fi authors dreamed about. By 2016, all of those crazy predictions that never came true actually exist, like flying cars, jetpacks and space colonization. Anyone living in this post-scarcity world should be happy…but not Tom Barren.

Tom is a thirty-something ambitionless screw-up who still lives with his parents. When his mom dies in a freak hover car accident, his emotionally distant (but genius) father takes pity on him and gives him a job working on his time travel project. He is just there to act as a back-up “chrononaut” in case anything happens to the main crew; no one really expects him to actually travel through time. Things go awry (as they often do) when he falls in love with the lead chrononaut, Penelope Weschler, who was supposed to be an astronaut until she discovered she had a rare neurological disorder that prevents her from flying in space. She takes a liking to Tom and they sleep together. It’s discovered on the day they are scheduled to take the first trip through time that Tom accidentally impregnated her and they have to suspend the trip. Denied her chance to be the first person to travel through time, Penelope kills herself. In his depression Tom breaks into his father’s lab and goes back in time to witness the creation of the Goettreider Engine.

But, like I said, Tom is a screw up. He accidentally sabotages the creation of the Goettreider Engine and when he returns to the present he finds out he is in one of the worst dystopias ever imagined…OUR TIMELINE!!! Oh, the humanity!

Except things aren’t that bad for Tom (known as John in our 2016). He is a visionary architect, his mom is still alive, his dad is a caring father and he has a sister who is his best friend. Granted, they don’t believe his story about time travelling and changing history for a second and instead think he is just overworked, had a nervous breakdown and confused the novel he was working on for reality. Tom does find someone who believes him: an alternate version of Penelope Weschler (called Penny) who, instead of wanting to be astronaut, opened a book store in a gentrifying part of Toronto. So one would think the smart thing to do would be just to accept the better hand dealt to you, but while Tom might be a screw up, he still has a conscience. Tom doesn’t believe he deserves a happy life considering he wiped billions of people out of existence. He is determined to set things right or, if that’s not possible, at least convince everyone he really did travel through time. To do that, he needs to track down the whereabouts of Lionel Goettreider…

I didn’t know exactly what to expect when I decided to read All Our Wrong Todays. Time travel stories are always hit and miss for me, but I can honestly say I adored this book. It was funny, insightful and heart-breaking. I loved the memoir style it was written in since it gave the story of Tom/John some raw, emotional weight. There is also no ambiguity whether Tom/John is just crazy and techno-utopia is all in his head or if he really did travel through time. You really do get pay off on what happened to Tom/John and whether he will have a chance to come back from it.

I also enjoyed the idea of “temporal drag”. In a lot of time travel stories, the time traveler is never impacted by the changes to the timeline. Considering the slightest change could wipe you out of existence (i.e. your parents don’t have sex on the day you were conceived, hence if they do have kids, its with a child that doesn’t have quite the same genetic make-up as you) this is one of the major flaws of the time travel genre. Kudos then to Mastai for at least trying to address it by suggesting the universe will self-correct paradoxes created by time-travelers by making sure they come into existence no matter how improbable that would be.

Admittedly it does raise some issues regarding free will. At one point in the book Tom quietly scoffs at the idea of deterministic time travel, yet certain things still need to happen to make sure that Tom (or John in our timeline) still comes into existence. This event at least is determined so how can we have this and still be able to change history? Or is this one of those “fixed points in time” the Doctor is always going on about? Or do I just not have the scientific or philosophic background to understand how this works? Sigh.

And yet what I enjoyed most about All Our Wrong Todays was its commentary (whether intentional or not) on my favorite genre: alternate history. More often than not alternate history tends to be pessimistic. When we imagine alternate timelines (such as a slaveocracy being established by aristocratic plantation owners or having a genocidal madman realize his dream of conquering the world, to name two popular scenarios) we often make the changed present worse then our current present. We do this because there is a general assumption that as bad as our present can be, its probably the best alternative out there in the multiverse.

The last couple of years have convinced me that that is a load of bull. Such a belief encourages us to do nothing to actually make real changes to society because we assume “it’s not that bad” when you consider how much worse it could be. All Our Wrong Todays touches on this a couple of times, especially when a character criticizes the idea that we rely too heavily on technology to just provide a magic wand to fix our problems – I couldn’t agree more. History is full of these pockets of progressive moments in civilization that show us we could have done better then we did…but instead we took the easier or cheaper way.

So if there is one big message I can take from Elan Mastai’s All Our Wrong Todays it is that while our 2016 might not be a dystopia, it’s not the best of all possible worlds. We screwed up along the way, but there is still a chance to get back on track. We just need some reminders of what could have been. That made this book one of the best novels I read in 2017 and I think it is certainly worth a read from anyone out there who is still searching for the future we were promised.

3D printing has popped up in science fiction for ages: recall the Star Trek crew materializing food in the microwave-like “replicator” or Neal Stephenson’s “matter compilers” in The Diamond Age. The appeal of creating whatever one wants at the simple press of a button excites the inventor in all of us. But, like most pined-for […]

I’ve gotten twenty days into the grueling forty day marathon that is Gods Will Be Watching, but never further. In the end, I feel like that says something more about me than it should: I know how I can survive, but I don’t do it. Gods Will Be Watching teaches that failure, sometimes, is preferable […]

Review: Thread of a Spider by D. L. Gardner