In this week’s viewing: Land of the Lustrous takes another strange turn, Guru-Guru notices a new season has started, and more! 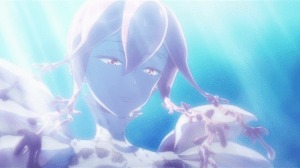 Land of the Lustrous #4 – Phos could get back to work methodically cataloguing everything for the encyclopedia, but eir friend has much more interesting things to talk about, and nearly all the other gems have written em off as crazy for being able to talk to a slug. And besides, there might be another gem trapped underwater! So Phos blunders off into the unknown after being specifically told not to, and inevitably it’s a trap.

But along the way, we get another version of history that might be true. In this one, the humans left behind after the end of civilization didn’t just metamorphose into gems, but rather split into three components. The gems are their “bones”, the part that endures a long time. Ventricosus’s people are their “flesh”, inheriting mortality, reproduction, and gender. And the Lunarians are the “souls”, trying to recapture their bodily components.

This puts Phos in a uniquely interesting category, being part “bone” and “flesh” now. Perhaps there is a way for em to pick up some Lunarian essence too.

The only room this schema leaves for Master Kongō is as the last remaining fully integrated human. Except that if he calls the gems “children”, and they’re centuries old, he’s got to be even older than them, so not a human quite as we know them. 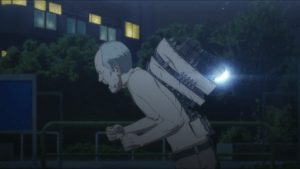 Inuyashiki #3 – Faced with an opponent his invisible raygun doesn’t work on, Hiro decides to declare victory and go home. He returns to trying to protect his buddy Naoyuki, but even after killing all of Naoyuki’s enemies, all he gets is a request to stop helping. Hiro is clearly an out-and-out sociopath at this point; he doesn’t understand other people and focuses only on his own wants. As long as Naoyuki is going back to school, he’s gotten the result he wanted, so Naoyuki pushing him away isn’t something to get angry about.

Meanwhile, Ichirō is finding his own way into a new comfort zone. First he’s taking on gangsters (tattoos are anime’s visual shorthand for “this person is into organized crime”), then flying through the air, then discovering he has miraculous healing powers as well. But instead of the potential for violence, he’s enthralled by his new ability to help people.

Ichirō singing the Astro Boy theme to himself makes for a nice humor break in the middle of the darkness, but it’s also a sign of who he is. He would have seen the original Astro Boy as a child, and at 58, he’s still able to reach for that image of his childhood hero. He’s the sort of person who, deep down, has never quite given up on the dream of saving the world. 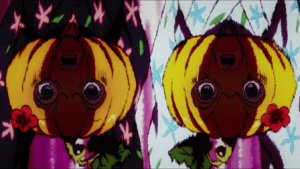 Speaking of European legends, the Japanese spirit world then takes a timely interest in Halloween. Japan’s Halloween currently takes its cue from the Americanized version. This means lots of pumpkin-themed props and treats (Japan has so far escaped the horror that is pumpkin spice everything, as far as I know). This also means costumes, though there seems to be a belief that one has to dress up as a witch, a ghost, or a monster, rather than the complete randomness seen in Western countries. 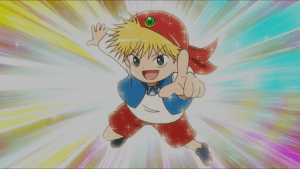 Magical Circle Guru-Guru #17 – Hey, it’s a new season! Time for new opening and closing sequences and themes! This is usually done right at the season break, so either they wanted to wait until the end of the Alahabica arc or, more likely, the production delays that crop up so often in anime are responsible.

Nike is running out of time to find all the elemental powers, so he gets a chance to pick up the Sword of Earth if he can summon the King of Earth in the right way. Once again, it’s Kukuri who saves the day with her magic, though Nike gets a nice moment taking down Ride’s golem. But much more importantly, Nike meets a man who can teach him the true secret of heroism: posing your enemies to death!

Guru-Guru is still bumbling along nicely, but the endgame is approaching fast. There are still a couple more plot coupons to pick up, and then it’ll be time to fight the demon lord himself. If this follows the standard RPG plot, it’ll be a simple matter of hacking through the bad guys until reaching the big boss, but I find myself hoping for some big last-minute twist. 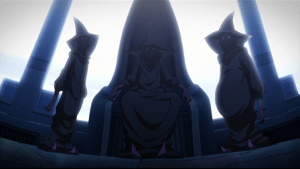 Kino’s Journey -the Beautiful World- the Animated Series #4 – For a change, the story rejoins Shizu and Riku as they embark on a sea voyage with the Land of Willful Idiots. At least it’s a change until Kino shows up again and then, addressing the problems, turns into pulling out the guns again. Well, there is at least a twist in that the idiots are so willful, they don’t want their problems solved.

I get that this is meant to be a metaphor for the universal human tendency to ignore problems and hope that they go away, but it would have helped to explore the people’s attachment to their country and history more. Or the excuses they were giving themselves for why the flooded areas were flooding (presumably those were inhabited at some point, right?). Or anything, really, other than “these people apparently just make stuff up”.

I can’t tell if this was a badly written story to begin with, or if it’s just a bad adaptation. But it’s definitely a new low for this show, and not even the big infodump of Tifani’s much more interesting backstory makes up for it.

Horror on the radio: the BBC broadcasts The Omen and Hammer’s The Unquenchable Thirst of Dracula

Comic strips were the only game in town in the 1930s but these strips were eventually collected into omnibuses that lead to the standard comic book. Heroic Fantasy was slow to appear in  the “four-color format” but tales of the glorious past were not. In 1937, Hal Foster exploded in the newspapers with Prince Valiant, […]

Never heard of it doesn’t necessarily mean it was bad. Or maybe it was SO bad, it’s worth watching!