In this week’s viewing: Inuyashiki and Kino’s Journey get bored and decide to let smoeone else be the hero, and more! 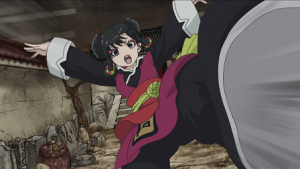 Hozuki’s Coolheadedness 2 #8 – Having established Yomogi as a fanboy, the show then proceeds to use him as a launchpad for a nearly self-referential discussion of anime adaptations of manga. (In case you’re wondering, art styles do change quite dramatically sometimes, but this adaptation has stayed fairly close to its source material.)

Yomogi is wise enough to know not to try to meet his heroes. Nasubi and Karauri are not, so it’s time for a field trip to the court of the tenth king of Hell, Godōtenrin, and a lesson on the kyonshi or “hopping vampire”. The kyonshi is really more like a zombie (the original Chinese name jiangshi means “stiff corpse”, anyway), though it is believed to be able to drain lifeforce, and some more powerful ones can reputedly turn into wolves.

Chun the kyonshi is particularly powerful and beautiful, so of course she’s caught the eye of the Hakutaku. But it’s not just him. Having a male character spotaneously develop a nosebleed is anime and manga code for arousal. Having something happen that coincidentally results in a nosebleed in the presence of a woman is usually meant to foreshadow attraction. Maybe Hakutaku will have someone to offload his girlfriend on soon.

One thing that isn’t mentioned in the detailed discussion of vampire manga’s origin is, who’s the author? If they’re familiar with Chun and Godōtenrin, then it must be someone living in Hell. Someone we’ve already met? 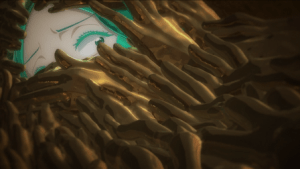 Land of the Lustrous #8 – Phos’s arms are irretrievable, not that Antarcticite doesn’t try, braving the depths and the weirdly non-floating ice floes looking to smash em to bits. Kongō sends the gems to the place where they are born to look for replacement parts.

All they can find is metal, but since Phos has yet to meet a bad idea e doesn’t want to try, Antarcticite slaps some gold and platinum on to see what happens. The Inclusions that bind the gems together take to the metal rather too well, manifesting Phos’s fears just as the Lunarians turn up again. Phos breaks free and learns how to use eir new composition, but it’s too late for Antarcticite. E is left lamenting that this isn’t a shōnen story where powering up and overcoming your past limitations means being able to save your friends.

It’s hard to believe that in the over three thousand years the gems have existed, someone didn’t try this before. On the other hand, the rate at which they’re being carried off could mean they’re losing knowledge as well, and Antarcticite is especially out of the loop. There’s a reason for Phos to pick up the encyclopedia project again, if there’s anyone left to read it soon. 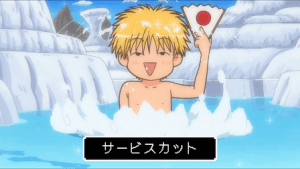 Magical Circle Guru-Guru #21 – It’s been fun for Kukuri and Nike, hanging out with new friends and trying new foods, but suddenly it’s almost December, they still have two more elemental swords to collect, and someone has just raised the Demon King! Allegedly, anyway!

Our heroes hurry onward with the help of the world’s longest-lasting adventuring party. If G-Fantasy gives you the sense of a boy band way past its sell-by date, that’s kind of what it’s going for— they’re acting out bishōnen (pretty boy) tropes. But the party turns out to be useful help, because with age comes wisdom… and also the ability to do ultra-cool group poses. 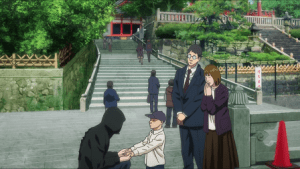 Inuyashiki Last Hero #7 – Shion turns out to have never believed the news about Hiro, until she hears it straight from him. Even then, she somehow gets through his bafflement about other people’s emotions and persuades him to start using his abilities for good. Though the power of Twitter, he becomes a mobile last-ditch health service.

I was being flippant about calling cancer the real villain in this story a couple weeks ago, but here we are. Cancer isn’t going to drive an action show all by itself, though, so the police are back and trying to capture Hiro again. I wonder if they’re just after him for the murders, or if they’ve fingered him as the mysterious miracle cure guy as well.

At this point, the story seems to have lost interest in Ichirō entirely. What exactly is his role when Hiro gets to be both the hero and the villain? 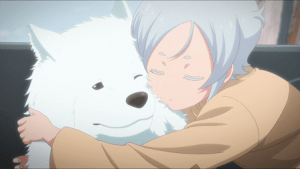 After healing up from the incident with the ship, Shizu makes it clear to Tī that if she wants to travel with him, she needs to not do anything crazy with deadly weapons again. So by the end of that day, she’s gotten into his stash of grenades and is threatening a local official with one.

The episode is padded out with a day of Tī and Riku doing nothing much. In a show with better writing and characters I cared about, this would have been a heartwarming interlude. Undoubtedly the people who voted for it in the poll of which stories to adapt have developed that connection with the characters, so it mostly serves as another sign that the source material has much better episodes to adapt.

Media SF – in all of its varieties – is firmly and uncontestably rooted in the literature (whether it acknowledges its sources or not). The problem for the audience of media fare is that the mainstream definition of “sci fi” is overly broad, encompassing bad examples along with the good and offering no inherent means for distinguishing one from the other .

In this week’s viewing: It’s time to wind up the season with three finales.

The View From Clarkesworld

Who Do You Blame in a Science Fiction World?