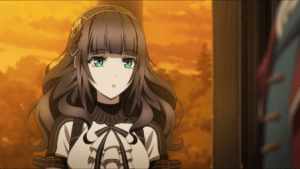 Code: Realize ~Guardian of Rebirth~ premiere – Cardia Beckford’s body exudes a deadly poison, so she spends her days alone, sitting in a dark room, wearing an overdesigned dress, brooding on her fate. Then one day, she’s kidnapped twice in under an hour, and finds herself in the company of Arsène Lupin, Impey Barbicane (of From the Earth to the Moon), and Victor Frankenstein. Because apparently someone saw The League of Extraordinary Gentlemen and said, “How has somebody not turned this into a lousy romance already?”

Like last week’s Sengoku Night Blood, this is an otome game adaptation, which means a passive, barely defined protagonist surrounded by a bunch of hot dudes and endless opportunities for romance. So far, Cardia’s potential love interests have kidnapped her, knocked her out with sleeping gas, immediately propositioned her when she wakes up, and made her a prisoner at the stately country manor which serves as their base of operations. Swooning yet?

Visually, this contains some lovely art marred by an enthusiastic devotion to the Just Glue Some Gears On It school of steampunk. Gears appear as fashion accessories, whirling helplessly on some device used to detect nonmechanical phenomena, randomly sticking out of the ground amongst buildings, and upstaging the faceless villain as he cackles over something or other.

Also there is a cute corgi in a top hat. There, I managed to say something nice about it. Now, don’t watch this show. 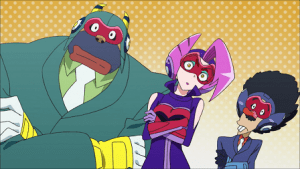 Time Bokan: The Villains Strike Back premiere – Bimajo, Suzukky, and Tsubuyakky are still a hapless group of henchmen trying to help the mysterious Oyadarma warp history. Their latest assignment sends them to retrieve a McGuffin from Thomas Edison, but after they patiently listen to his life story, help him invent the lightbulb, and destroy a certain number of things in the process, they’re still thwarted at the last minute by time patrol agents Tokio and Calen. Who are, after all, supposed to be the heroes of the story…

Tokio and Calen are having their own difficulties. Their boss has been kicked downstairs and replaced by a young woman whom Tokio finds extremely distracting. Their robot sidekick is off having extreme body modification and has been replaced by a gloomy android who is only wiling to perk up for Calen. Nevertheless, they’re still ready to defend true history, no matter how weird it gets or how many ludicrous mech-smashing duels they have to get into with Oyadarma’s finest.

Time Bokan continues to be an over-the-top comedy with no regard for actual history, actual physics, or actually making some kind of overall sense. And none of that is a problem. With an infinite supply of looniness, it is able to overcome all obstacles. Still entertaining, and still beyond analysis. 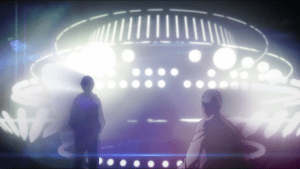 Inuyashiki Last Hero premiere – Ichirō Inuyashiki is 58 years old and lost, with no emotional connection to any other human beings including his own household. When he learns he has untreatable stomach cancer, he can’t even bring himself to tell his family, but walks to an isolated hill and cries on his dog’s shoulder instead. And then he is smashed by a UFO, hastily rebuilt as a cyborg, and suddenly has to deal with not being weak, ill, or entirely human anymore. Soon he realizes that he has the power to help people, such as a nearby homeless man about to be targeted for a thrill kill.

There’s a lot to like here. In a medium where nearly all the heroes are teenagers, it’s refreshing to see a much older protagonist. Inuyashiki goes all the way to the other extreme, presenting a story in which all young people are just the worst, but there’s room to believe that this is a reflection of the viewpoint character’s feelings, and not the author’s.

Inuyashiki has one of the better-directed premieres this season; overall production values are uneven, but not distractingly so. I’d really like to give this a chance.

And that’s it for the premieres. Saredo Tsumibito wa Ryū to Odoru was postponed until April at the last moment, and Ore-tacha Yōkai Ningen never got a streaming deal. Now to figure out what to follow for the rest of the season… 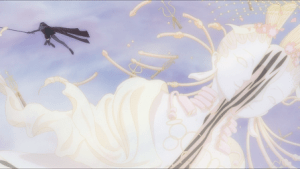 Land of the Lustrous #2 – Kongō starts off the story with a quick history of the gems: they are somehow descended from the last remnants of human civilization, after most people fled Earth to escape some catastrophe. The six moons heralding the event are, presumably, where the Lunarians are coming from. So are they the work of aliens, or whatever humans survived?

Phos still has no idea how to go about writing an encyclopedia, but eir ongoing efforts to delay and whine about it allow for the introduction of a few more gems and a demonstration of the difference between hardness and toughness. And then things get much weirder as a new wave of Lunarians drops a giant snail at Gem HQ which proceeds to eat Phos. (Or maybe it’s a normal-sized snail and the gems are very small.) Gem blades are no good against the snail; coincidentally, we did just learn that there’s someone among the gems with a special power good for killing organic things…

Land of the Lustrous clearly has a whole lot more to explain about its world in due time. I can’t guess where this story is going, but the amazing, unique setting and beings have already made this a must-watch. 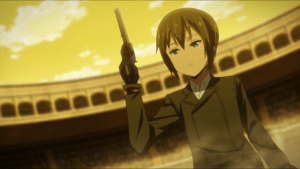 Kino’s Journey #2 – As hinted last episode, Kino is not just the sort of person who can kill people, she has been specially trained to kill people, and has no trouble killing people if it seems like the best way to solve a problem. But she doesn’t kill for fun, or simply to stop a threat to her own person. She is willing to kill for revenge for a friend, and I’m sure that’s exactly what the widow was counting on when she sent Kino to the colosseum.

This is a very gun-positive show so far, but as the source material has been going on for 20 volumes, it seems fair to expect that we’ll be getting more of a variety of stories in future episodes. The premise of “small country with idiosyncratic aspects to its social contract” has near-infinite range, so let us continue on in the hope of seeing that.

A word about pronouns: English-language viewers may have noticed that this column is using female pronouns for Kino while Crunchyroll is using male ones, and some commentators elsewhere are using neutral ones. It is well-known in anime fandom that the very first book of the source material explains that Kino is female, though she prefers to present ambiguously (much easier in Japanese, which rarely uses gendered pronouns). Knowing that, I feel the appropriate thing to do is use pronouns that match her identification. 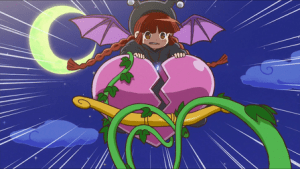 Magical Circle Guru-Guru #14-15 – Just as Nike and Kukuri find their next quest, Giri’s minions plot to take Kukuri out of the equation by disrupting her emotions. And it works! Except for the part where it turns out that’s not their agent, and this is all part of some divine plan to help Kukuri level up even further. The party is pretty helpless without their magic-user, but somehow they manage to stumble back to Alahabica, uncover its secret, and come close to mending things with Kukuri.

There was a great bonus on episode 14 with a pseudo-preview for an entirely different sort of show. I was kind of hoping we’d get something like that every episode for this season. But no matter, Guru-Guru is still rollicking along with no sense of running out of gags yet. I’ll be happy to keep watching this until the end. 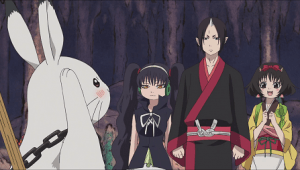 Hozuki’s Coolheadedness 2 #2 – Peach Maki, Japanese Hell’s favorite enthusiastic but slightly inept pop idol, is now part of a superstar duo. As part of their tour of the underworlds, Maki-Miki is pressed into service to make punishing evildoers look cool to their young fans. This provides a chance to look at some of the more obscure areas of Hell and meet another old friend from the first season, because psychotic cute furry animals never get old.

Then Karauri and Nasubi get to visit the records department, where the workers are “the most Japanese of Japanese people”, which means it’s time to lampoon the Japanese reverence for overwork. Though usually discussed in the context of office work, this could also be about attitudes in the manga industry, where artists such as the one who wrote the source material being adapted for this show are forced to work punishing schedules to provide material week in and week out.

Change of title notwithstanding, Hozuki’s Coolheadedness still has what it takes. It’s a fun way to encounter Japanese mythology and is still worth watching more of. 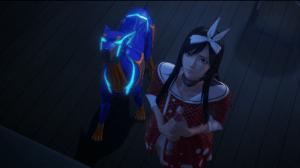 Infini-T Force #2-3 – More heroes, more problems. Not only is the latest arrival another refugee from a destroyed world, someone in the villain squad had a mind-control collar on him. Still, now they’re up to four superheroes plus the wielder of the Case, which should be sufficient to stop any amount of villainy, right? If only the Case hadn’t fallen into the hands of a suicidal misanthropist.

Then Takeshi finds out that his employer is just another would-be destroyer of most of the universe. Once he was a brilliant detective, but then someone turned him into a test subject for mad science or maybe mad cybernetics, and so he had no choice but to become chaotic neutral and figure out a way to rule the world.

Yes, we are deep into comic-book territory here. This might as well have been called Tatsunoko’s Avengers, and it looks to be every bit the entertaining romp that title would promise. Add a heroine who isn’t a passive victim of life, especially in the context of this season, and this would be a great show to follow.

Just one problem: it still isn’t available in most major English-speaking countries. It is the policy of this column to not taunt a significant portion of its audience with something they can’t legally watch, so unless there are some last-minute licensing announcements, this is where we’ll leave it. 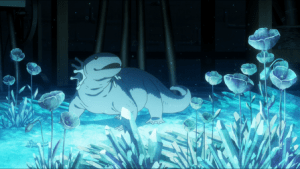 The Ancient Magus’ Bride #2 – Well, I guess the bath last episode wasn’t the end of the unfortunate aspect to this story. Elias is now obsessed with a honeymoon, despite the fact that he and Chise haven’t been married yet. But first, they go to the big city for some shopping. There, the store’s proprietor is shocked by Elias’s failure to explain something or other about magic to Chise, only to be further shocked because Elias didn’t have a chance to explain the whole Sleigh Beggy thing before she kicked him out of the room. Boy, it would be great if people in this show used their words or bothered to ask each other questions.

But instead of explanations, Chise gets tea with a local priest, and no clear signs of whether the show knows that Anglicans exist or if this is going to be yet another anime where all Christians are Catholics. Then it’s off to Iceland so she can be kidnapped by a dragon.

There are moments of great beauty and wonder in this show, but outside of those moments, what we have here is yet another random remix of European mythology with far too much idiot plotting. It’s still way less problematic than Uprooted, but I think it’s best to leave it here.

So, then: Land of the Lustrous, Kino’s Journey, Magical Circle Guru-Guru, and Hozuki’s Coolheadedness 2 are in for the rest of the season, and Inuyashiki gets one more episode to make its case. Unless Infini-T Force makes a last-minute deal.