Home Interview When SF makes sense of the World 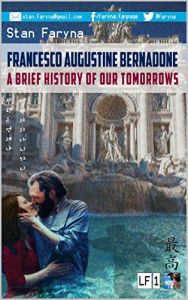 Stan Faryna is an author, online strategist, entrepreneur, gamer, and unaccomplished gardener. He’s worked in think tanks, seen the Dead Sea Scrolls and the cave where they were found, mopped up the blood of a gangsta gunned down in a coffee shop owned by friends, survived a long ex-pat adventure in a post-Soviet bloc land, and driven a shaky Dacia at over 100 mph with a tail wind while singing the chorus to O-zone’s song, “Dragostea Din Tei.”

I read your first installment of Francesco Augustine-Bernadone and found it fascinating. Not only is there a sophisticated science fiction element, but you kept directing the reader to the substance of life, which is love, in a wildly technical environment. Tell me your thoughts. What is your goal as a science fiction writer?

Science and technology has got to excite the science fiction reader; expand the imagination, be wondrous or fearsome! Speak to our fears or our hopes. And yet it also must make sense and make sense of the world – not just help us to make a plot work.

How does that work in your novel Francesco Augustine Bernadone?

I endeavor to use various “levels” of science and technology from the fantastic to the realistic to build a story, a world and a plot that is psychologically and intellectually interesting. I write what I know from my material, psychological and spiritual experience.

Here are four examples of science/technology in my story:

The FTL Internet Connection is an unlikely fantasy but it is a necessity to the game world and experience presented in the game-related parts of my story. As a technologist I’ve been thinking a long time about what a better game design needs in terms of hardware. While consumer-level super-computing is key, the bottleneck is the transfer rate of information.

As it happens in my larger story (beyond the first novella), the possibility of interacting with 10,000 acting players simultaneously requires an FTL Internet Connection.

Artificial Intelligence doesn’t exist for all practical purposes but most of us would like it to be real – especially businesses. For me, the most interesting progress in artificial intelligence simulation is in gaming. I suspect that increasing immersion in a game is driven not so much by sensory realism but psychologically meaningful interaction and relationships between the game world/platform and the player. As a pioneer in online social interaction technologies, this has been of great interest to me for 20+ years.

Challenging and interesting Non Player Characters in the story’s game required some simulation of artificial intelligence.

Reality Augmented Virtuality is using real information about the individual and their environment to augment one’s experience of a limited virtual experience as opposed to the government using the same information today to make conjectures about you. As IOT (Internet of Things) becomes more prolific and household, this information will be more easily usable and accessible across technology platforms including games.

In future novellas, I bring this technology into play to create tension as much as to excite gamers about the future of gaming.

Ad tech is little understood outside of the online ad industry and industry leaders, but I can tell you that the kind of big data being processed today may seem like science fiction, but it’s real. The internet knows way too much about us as individuals. As a former European national director of the Internet Advertising Bureau and owner of a technology start up, I had the benefit of observing and participating in the development of this technology in the early 2000s.

The technology is not widely deployed today, but it is being used by governments and ad tech companies. I provide some insight into this technology as my MC experiences it first hand. All of which is for the benefit of revealing the personality of the MC.

Show us an example of how this applies to your story?

Who is Francesco? The big data doesn’t lie! That’s one of the purposes of my use of the ad tech in my storytelling from the following excerpt:

On the other side of the street, Francesco admired a younger version of the long-deceased and once-celebrated American actor, John Wayne. Wayne with a milky mustache, spoke from a four-story, large format ad.

Best milks in the world from the happy, fat and grass-fed cows of Resita, Romania.

Francesco was intrigued by most of the ads in this game world. They were everywhere. Some were ironic. Others, anachronistic – Francesco could not imagine John Wayne had ever had milk from Resita, Romania. But all of the ads seemed very precisely targeted to those players within the visual reach of the ads. John Wayne, for example, was one of Francesco’s favorite actors. A few days before, Francesco had just watched the 1969 film The Shootist on Amazon Prime for the seventh time. Wayne had given his greatest performance in that film – that’s what Francesco thought.

As Francesco moves down the street of a simulated, future Bucharest in the game, he sees several different ads which are displaying content that is likely to appeal to him. John Wayne, Martin Luther King, Jr., etc. For the sake of contrast, there is a glimpse of the antagonist’s character in a racy ad for a brothel.

In a future novella, this same kind of information is used in a malicious manner by the game system.

I’m anxious to read the sequels. Thank you so much for sharing your thoughts and method with us!

You can read more of Stan’s writing on his blog

And enjoy his book.