Home Review Book Review: At the Table of Wolves by Kay Kenyon 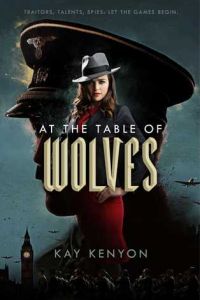 In my last review I promised to look at another novel featuring super-powered spies and I keep my promise today by looking at Kay Kenyon’s At the Table of Wolves, book one in the Dark Talents series. And what is my initial reaction? Well…lets just say its a shame I read this after MJ-12 Shadows.

At the Table of Wolves is set in a timeline where at the end of World War I humanity experiences something known as the bloom which gives many humans superpowers or talents. Exactly what caused the bloom is unknown although many suspect it had something to do with all of the carnage and trauma caused by the war. It is also implied that talents have always been around (in fact one character even speculates that Jesus may have had a talent), but they have only recently been around in large enough numbers to be noticed.

Anywho, talents can range from passive abilities like the spill (which causes people to inadvertently share their deepest secrets with you) to more active talents like the cold cell (which allows you to freeze things). That said, despite people having superpowers, by the present day of the book (1936) not much is different about the world. Talents usually need to register with the government and can experience some discrimination (you can probably guess why someone with the spill doesn’t have many friends), but otherwise the world is pretty much the same as it is in our timeline, which one major exception.

Enter Kim Tavistock, an upper class British reporter recently returned from America. She has the spill, which is a useful talent to have for spying; at least, her caseworker thinks so. Turns out he suspects that someone is a traitor for the Nazis within Britain’s talent research program and he wants Kim to get some dirt on them using her talent. Kim, who is disturbed by the creeping Nazi ideology spreading through the countryside especially among her father, Julian, and his circle of friends, agrees. She infiltrates a group of fascist sympathizers where she meets Erich von Ritter, a German businessman who in reality is a spy. When Erich inadvertently lets something slip, it sends Kim down a path to prevent a German invasion of Britain using an unknown talent that can transport an army across the North Sea without the use of ships or planes.

Meanwhile, Kim’s father Julian is also investigating this possible invasion. He has been working for the British secret service posing as a fascist sympathizer to find out the day and location of the attack. He is aware his daughter is in over her head, but there is nothing he really can do except keep an eye on her and hope she doesn’t get hurt, while dealing with a government who finds the idea of a German invasion preposterous.

At the Table of Wolves is a well-written novel, but to be frank, I really didn’t enjoy it at all. The novel was a slog to get through and I found myself taking breaks instead of reading it. I think the biggest problem is that I just don’t identify at all with early 20th century upper class British people and their hanger-ons. Regardless of whether they were the heroes or villains, I just found their problems and issues uninteresting to say the least. In fact that was my primary issue with The Windsor Faction.

I also found the world building to be rather weak. Despite having super-powered individuals surface two decades earlier, 1936 Britain isn’t that different from our own timeline’s version. Talents seem to live normal lives even after registering with the government and even those that don’t register don’t appear to be hunted down and rounded up. Showing how the world could change with the introduction of super-humans should be AH 101, but here it’s glossed over.

I also found the idea of Germany launching an invasion in 1936 to be pretty unlikely, even given the use of Talents. The German military of 1936 was nowhere near the German military of 1939. Major re-armament of the German military and the reintroduction of conscription in defiance of the Treaty of Versailles only began the year before. Plus the massive amounts of military hardware Germany inherited when it occupied Czechoslovakia wouldn’t happen until 1938. Thus, just because Germany has the ability to ferry an army to Britain with magic doesn’t mean they would immediately use it once the discovery had been made. Now I’m not saying the Nazis ultimate goal wouldn’t be to do just that, but it would be like America getting the atom bomb in 1936 and then immediately nuking Hiroshima with it. Why would they do that? They are not at war and their military isn’t ready so it doesn’t make sense. And in the case of Germany, why would it invade Britain and send most of its military to an island before knocking out France?

Finally, there was a part in the book that made me a tad uncomfortable. It turns out Hitler himself has a talent that allows him to motivate large groups of people. Now I doubt that this was Kenyon’s intention, but by doing this it seems to imply Hitler came to power because of his paranormal ability and not because of the choices made by the German people. When you take away the blame for the horrible things done by your nation, you also take away the responsibility to make things right. You saw this from a few reviewers who criticized Captain America: The Winter Soldier. They pointed out that by blaming every horrible thing America did post-WWII on secret Nazis working within our own government means that regular American people don’t need to feel responsible to rectify the past mistakes. Saying “Hey, its not my fault, I’m not a secret Nazi!” is also not that far from saying “Hey, its not my fault, I was under the control of a talent!”

Perhaps I am reading way too much into what was really just a throw away line. In the end there may be some people who could enjoy At the Table of Wolves as a spy thriller featuring superhumans, but I am sadly not one of them.