In this week’s viewing: Made in Abyss examines how tough life is without the help of a robot friend, Chronos Ruler ties itself in causal knots, and more! 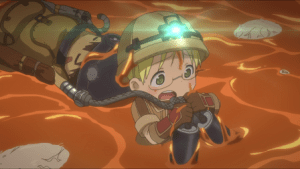 Made in Abyss #9 – The Third Layer presents a sheer vertical drop for thousands of meters, but with caves and tunnels honeycombing the walls that can offer an alternate route. (Pedantic question: How has nobody in this world invented the parachute? Yes, there are flying predators, but it’s not like the cave system seems any safer.) When Reg has to fire the Incinerator and goes offline to recharge, Riko is forced to confront what her trip would be like without him.

This means carrying all the supplies, nearly being eaten by three different species, and almost running right off a cliff in the throes of an intense hallucination. Riko has been thinking of this as her personal adventure, but she comes to realize how little she’d have managed on her own. Reg’s not just tagging along, he’s the reason she isn’t already dead several times over.

But he may also be the reason the Crimson Splitjaw is hunting them. If they’re smart enough to remember specific people, as Riko says, then maybe the reason it was up near the surface — where, as it was said at the time, they rarely go — was that it was already chasing Reg. So why? He might just have annoyed it on his way up, but suppose it had a specific connection to him? Like, remember how ascending from the sixth layer or below causes people to lose their humanity? Suppose Lyza survived her final descent after all… 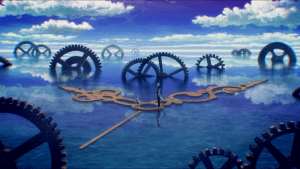 Chronos Ruler #9 – Kiri, Mīna, and Blaze go off demon-hunting, leaving Victor to work through his feelings about his family. Which he promptly screws up, because even he can’t stand his five-year-old self.

It seems like his mother’s sudden crisis is one that didn’t happen in his original timeline. She would have died if not for the older Victor, and he doesn’t seem to remember anything about this happening before. So if someone could have induced it… yeah, my money’s on the mysterious assistant too.

A word about blood types: Yes, AB- is the rarest type, but blood donations don’t usually need to be an exact match. Any type which doesn’t contain any factors which are missing in the recipient will do. AB- recipients can take A-, B-, or O- blood. (O- is the group which absolutely requires an exact match.) Also, the reason kids aren’t allowed to give blood is a problem of size. They just don’t have any to spare. No way should someone the size of 5-year-old Victor be able to even survive losing the amount of blood shown.

This episode was correct about one thing, though: blood donation saves lives. If you’re an adult in good health, check out the rules in your country and see if you can get involved! 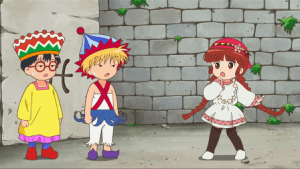 Magical Circle Guru-Guru #9 – Guru-Guru stops to catch its breath with an interlude about Kukuri’s childhood, her vanished clan, and reconnecting with her power. Then it’s time for another new set of outfits and back to silly adventuring mode. Demon Prince Raid gets another chance to establish that he is both insanely powerful and totally useless, Kukuri discovers the power of UFOs, and then it’s dungeoneering time.

Old Man vs. the creepy cliché horror dolls is, in its own way, one of the most satisfying fights this show has yet served up. Another great moment for Western viewers of a certain vintage is a shout-out (almost literally) to an old Dungeons & Dragons spell, magic mouth.

Although the magic mouth goes all the way back to D&D‘s roots in the Dying Earth series, and has popped up in D&D-inspired computer games (most notably in the Bard’s Tale series), Guru-Guru‘s source is almost certainly the venerable tabletop game itself. Translated D&D was available in Japan in the 1980s, and bears much of the responsibility for the medieval fantasy tropes that worked their way into Japanese computer RPGs. The whole of this show is a distant homage to D&D, but rarely does a piece of it survive quite so unchanged. 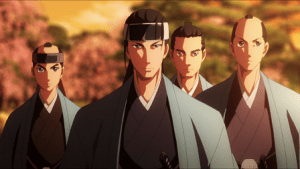 Katsugeki Touken Ranbu #10 – Ryōma Sakamoto should be nice and safe now, holed up in the Satsuma compound. Unfortunately, he has as little sense of operational security as anyone else in this show. (Yeah, in case you weren’t conspicuous enough, just shout up at your friends on the roof about changing shifts on your allegedly clandestine watch. I’m sure no one will find that the least bit suspicious.)

Between that and the fact that all the time-traveling activity has finally reached a point where history is starting to bend out of shape, the Second Unit is assigned to keep a watch on Sakamoto until he can be moved out of the region. This means they may wind up going up against Toshizō Hijikata, vice-commander of the Shinsengumi (the special anti-royalist police), and wielder of the swords personified by Kanesada and Kunihiro.

The unhappy future awaiting Hijikata consists of losing battle after battle to the emperor’s army, helping set up a splinter state in Ezo (now Hokkaido) after the emperor was officially restored, and, when the new Japanese government moved to crush Ezo, being shot in the back as he threatened to kill any of his men who retreated. Not surprising that if Kunihiro still feels loyalty to his former master, he might momentarily consider if there was a way to make things turn out slightly better for Hijikata.

But, we’re probably headed for a flashy showdown with Hijikata, then a whole lot more emoting, then a trip to the hot spring mentioned in passing as Sakamoto’s later hiding place. 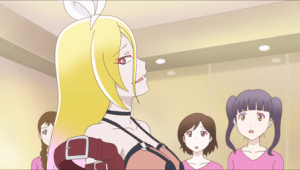 18if #9 – Misaki has had it with the jealousy from her bandmates, her crazy schedule, the creepy dudes with power over her career, the paparazzi, the insane restrictions on her personal life, and every other horrible thing about being a headline idol singer. When she falls into a coma after being nearly stabbed to death by a deranged fan (similar to a real attack on an idol last year), she embraces the power of the dream world to gather up every single person who’s been giving her crap and make them understand how much she’s suffered for her career.

Much like Misaki, this episode felt like it had a point it was going to make but lost its way somewhere. Instead, it gets distracted into the kind of total lunacy that can only be achieved by a late-night show with a tiny target audience and a guest episode director operating under an obvious pseudonym. I can’t say that “Kugatsu” didn’t come up with some memorable images — I expect that GIFs of the magical-girl-style transformation moment and Haruto summoning his “genie” will be haunting the Internet for years — but going for shock value doesn’t wind up working so well in the context of a show where nearly every episode is trying to peg the weird meter somehow.

What will happen to SF films when streaming conquers the universe?

Space Toys. No need to say anything more.

Steve continues his look at the first full year of Amazing Stories. This week it’s the third quarter of 1926.