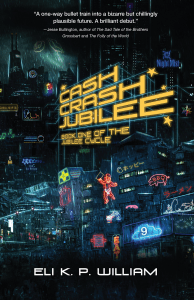 I have a friend, a very smart, very well read friend, with whom I disagree on the nature of post-singularity narratives (such as Hannu Rajiniami’s The Quantum Thief or Karl Schroeder’s Lady of Mazes, or even Michael Moorcock’s Dancers at the End of Time trilogy). He doesn’t like them. He doesn’t like them a lot. His argument is that when all matter becomes digital, anything becomes possible. But if anything is possible, a story is no longer a logical extrapolation of scientific principles, which means it can no longer be considered science fiction; at best, it could be described as science fantasy.

I don’t have an argument with my friend’s analysis. Where we disagree is on the value of post-singularity narratives. I love them exactly because anything is possible. I have found them to be pure exercises in imagination; when written by great storytellers, their level of creativity can be mind-blowing.

My friend and I never talked about virtual or augmented reality, which, it occurred to me while reading Eli K. P. William’s Cash Crash Jubilee, allows for the same level of unfettered imaginative storytelling (since digitally rendered worlds can be whatever we can imagine them to be), but has a sound basis in current technological research. In the novel, advertisements are projected onto every available surface, including the sidewalk, the sky and the moon; individual pieces of sushi appear to be brought to your table by origami cranes; you can appear in a variety of locations without leaving the comfort of your own home. As much fun as the imagery is, it is only one aspect of William’s engaging, enjoyable novel.

THE PLOT: governments have collapsed, ceding control of society to a small number of megaGloms, massive corporate conglomerates that control every aspect of existence. If you blink, you have to pay a fee to the company that holds the copyright on eye movements. If you walk, you have to pay the company that owns the copyright on leg movements. And, so on. Amon Kenzaki, the main character, is an agent of GATA (the Global Action Transaction Authority, which has elaborate mechanisms to ensure that markets function and are fair); his job is to remove people who have experienced “cash crash” (who have essentially gone bankrupt) from the digital financial network. Amon is a true believer in the system, but, as events unfold, he finds his belief challenged.

Cash Crash Jubilee is a reductio ad absurdum satire of capitalism, pushing it to its most bizarre extreme. In one scene, for example, Amon is offered a drink by a friend: he can either refuse, saving himself the cost of becoming slightly inebriated, or accept, saving himself the cost of arguing with his friend about it. “Amon asked PennyPinch to compare the cost of making a fuss to the rise in premiums. It informed him the difference would likely be negligible, so he reluctantly withdrew his hands.” (80) Life is strange when such personal interactions are subjected to a financial (as opposed to emotional) cost/benefit analysis.

William thinks through the implications of his premise, building a believable world, in a depth that is breathtaking. Early in the novel, for example, the main character is taking a course on how to control his blinking in order to reduce his expenses. That somebody would see the need for such courses (or, for that matter, PennyPinch, which helps users choose the cheapest action from an array of possibilities) and supply them is not an immediately obvious consequence of the novel’s premise.

Cash Crash Jubilee takes it critique of capitalism directly to one of the economic system’s most extreme acolytes: Ayn Rand. For example, the book contains a passage in which Amon describes the rationale behind the system: “Taxing lawful citizens for the system of law and order without their consent would amount to theft of their hard-earned assets, which is basically a form of enslavement.” (165). This sounds like it was taken almost directly from Atlas Shrugged. Later in the novel, when Amon has to rely on a friend to keep him financially solvent, he says he feels like a “mooch,” (348) a pejorative term used by Randian Objectivists to show their disdain for anybody who ever has to rely on help from the government. William looks at the world build out of Objectivism and doesn’t like what he sees.

In fact, the author portrays such a philosophy in Orwellian terms. GATA’s motto is: “All the freedom you can earn.” (39) But, surely, devoting your life to an economic system that requires you to slave away at a job and scrimp and save every penny is the opposite of freedom. And war is peace. And ignorance is strength.

There are also the nosties (derived from the word “nostalgia”); people who enjoy artifacts of the past (comic books, actual books, typewriters, etc.). “They reveled in the outdated, loyal consumers of the brand name called time.” (101) The disdain for the past by the ruling megagloms, rejecting history for a permanent present, is a hallmark of dictatorships like Nineteen Eighty-four’s Big Brother: “Who controls the past controls the future. Who controls the present controls the past.”

Finally, William refers to markets which have grown beyond the understanding of any individual as “a consensual hallucination.” (208) This was, of course, a phrase popularized by William Gibson in the opening of his first Sprawl novel, Neuromancer, albeit in a different context. We don’t have to wait for the future to experience this phenomenon: markets which are too complex to be understood by human beings are already here.

I love books that are full of ideas, so I’m naturally a big fan of Cash Crash Jubilee. But I would be remiss if I didn’t make clear that this is not some dry treatise on economics. William’s ideas are set in a story that picks up narrative momentum as hints of a conspiracy start to eat away at the edges of Amon’s belief in the system. And the last third of the novel is a thriller where the main character has to stave off his own cash crash.

I also enjoyed the fact that a list of corporate logos included:“No Logo Inc: the word LOGO with an x through it torn to shreds by shotgun buckshot.” Referring to Naomi Klein’s work was was a funny way to highlight the absurdity of the commodification of dissent.

Cash Crash Jubilee is a fun, smart read. I look forward to the next books in the trilogy.