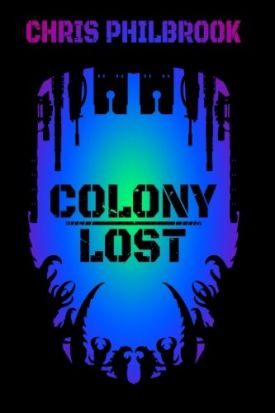 There used to be a time when such headlines were pretty common fare in local newspapers.   There no longer being that many local newspapers, that kind of thing has largely fallen off the radar screen, leaving the task to local websites, such as Amazing Stories.

I had occasion the other day to attend a reading by local author Chris Philbrook, and when I say local, I mean, pretty much right down the street from where I live.  Chris is on a book tour for his latest offering, a novel titled Colony Lost (the author’s first foray into science fiction).

There have only been a handful of times over the past near 60 years that I can recall discovering an author I was interested in living within a stone’s throw.  In New York City, they’re everywhere.  In Hillsboro, New Hampshire, population 6,011 (smaller than Worldcon membership this year!), not so much.

When I first ran across Chris on Facebook, I felt the same thrill fans in the thirties must have felt when seeing an address in a pulp letter column close to their own:  I’m not alone in the wilderness.  There’s someone else like me – maybe I’m not crazy for being into that Buck Rogers stuff!  (Note that my conclusion is not necessarily supported by the facts.)

Life of course interfered in our getting together and it wasn’t until I received notice  of Chris’s reading that he once again appeared on that radar screen.

I had a problem though.  I’d not read anything by him.  I don’t know about you, but attending a reading by an author you’re not familiar with is… uncomfortable… at best.  As an audience member, I feel obligated to be able to offer appropriate commentary, ask pertinent questions and critique positively (why go to a reading of someone whose work you don’t like?) in support of the author:  it can get pretty lonely standing up there, hanging your creative ass out for everyone to see.

Not having read Chris’ work, I’d not be able to do that.  On the other hand – authors are fans and fans support each other, or should.  If some guy living down the street from me wrote a genre novel and had the gumption to stand up and do a reading, I’d make sure that there was at least one warm body in the audience.

I need not have worried.  Attendance (population 6,011) was as good as I’ve seen at some big name author readings that get support for their promotional work from their publishers.

The event was held at the Fuller Public Library (formerly the NH Governor’s mansion) in a quite spacious room, circumstantially named the Gilbert room, which just so happens to be one of Chris’ characters’ name.

Chris had a commanding presence at the front of the room, seated behind a bannered table, numerous titles stacked in front of him.  Each chair had a freebie on it (a sticker), and Chris was busily signing volumes and selling more.  It was pretty brisk trade there for some time, a good sign.

Following a bit of introduction, some background, some discussion of his various book series, the setting for Colony Lost (described as “sci fi with some horror”) Chris chose a section and delivered his reading; if nothing else, I will offer the critique that Mr. Philbrook has mastered, or is close to mastering, the technique of building tension, an absolutely necessary adjunct for anything horror.  The only thing ‘d offer by way of negative critique is that Chris needs a microphone for his readings.

Then we got to the after-discussion, and here is where it became apparent that Chris is not a run-of-the-mill indie author; the discussion revealed that this author has given quite a bit of thought not only to the business of writing, but also the business of being a writer.

Our discussion ranged from Starship Trooper’s treatment of the voting franchise, a subject dealt with in Colony Lost (he has once again shifted the right to a franchise back to land ownership as a way of examining the question of who ought to have the right to vote in society), to his very successful engagement with Audible; as Chris rightly explained, he is not competing with other authors, he’s competing with apps.  This was, I thought, a quite astute variation on Pournelle’s beer money quote:

We’re basically after Joe’s beer money, and Joe likes his beer, so you better make sure that what you give him is at least as pleasurable to him as having his six-pack of beer would be. – Jerry Pournelle

Chris went on to detail the major subjects his various novels address as their primary themes – heavy stuff too, identity, diversity, questions of various rights (if Vampires are a real thing, since they are, by definition dead, what happens to their bank accounts?) and more.

It was quite an engaging discussion and, despite my lack of familiarity with his work, well worth having attended.  Chris Philbrook is not your average indie genre author and someone I suspect that we will be hearing from a lot in the future.

Side note:  I was also quite pleased to see one young reader, brought to the event by his mother, being given what may have been is very first voluntary literary selection, in attendance.  Not only is this how authors build their readership for a lifetime, it’s also how new fans are brought into the fold.  Years from now, that youngster will be saying, I got started with Chris Philbrook’s….

Second side note:  Discussions with Chris lead us to believe that we will be featuring an excerpt from Colony Lost here on Amazing in the near future.  Stay tuned. 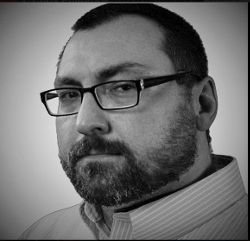 Chris Philbrook is the author of:The Reemergence urban fantasy series, the dark fantasy trilogy The Kinless, and the post-apocalyptic Adrian’s Undead Diary, the series that put him on the literary map, in addition to his latest, the science fiction novel Colony Lost.

You can find more about Chris, his gaming activities, his future writing projects and more on his blog, and visit him on Facebook.