The Clash of Eagles trilogy by Alan Smale truly embraces the high concept story that alternate history is famous for. 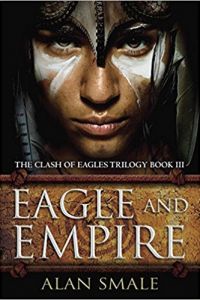 The journey of Gaius Marcellinus, the Roman Praetor stranded in an alternate North America, has finally come to an end. What began in Clash of Eagles and continued in Eagle in Exile, finally concludes in Eagle and Empire by Alan Smale.

Our story begins shortly after Gaius and his friends were successfully able to prevent war from breaking out between the Roman Empire and the allied tribes of “Nova Hesperia” (a.k.a. North America). This peace, however, is tenuous and their are factions on both sides that wouldn’t mind to start fighting again. Meanwhile, Gaius needs to balance his loyalty to Rome and his loyalty to his home for the last decade, Cahokia. This is especially hard since he made an oath to the Emperor to not tell the Cahokians about the encroaching Mongol hordes, who have invaded the west coast and are driving east toward the Rocky Mountains. This secret doesn’t last long and Gaius is ordered to travel southwest to seek out an alliance with the “People of the Hand”, which I believe are the modern day Puebloans.

Their mission is foiled by a Mongol force which decimates Gaius’ Roman bodyguards and sacks the Hand city they were staying at. Gaius is taken to the Mongol Khan himself and barely escapes being executed because the Khan wants him to go back and give word on how hopeless their cause is to his allies. This backfires as Gaius is now more determined then ever to save the Nova Hesperians from Mongol domination and after surviving a naval battle on the Mississippi River, he takes command of a Roman Legion and marches west with the combined Roman/Hesperian force for the final confrontation with the Mongols.

What can I say about the third book in a trilogy? If you didn’t like the first two there is really nothing I can say to get you to read the last book. That said, I still found Eagle and Empire to be an exciting conclusion to the Clash of Eagles trilogy, with an ending that was just open ended enough that Alan could always return to his universe if he wants to…and to be honest I would love to see what kind of cultures/nations would evolve among the tribes now that they had an earlier point of contact with the rest of the world. Also the characters are interesting, the Native American cultures we see are all fleshed out and the alternative technology we are introduced to (like gliders, hot air balloons, flame throwers, etc.) all seem plausible given the circumstances.

Of course, Eagle and Empire isn’t perfect. Despite Alan’s best efforts, it still seems like characters moved around the North American continent faster than a Game of Thrones character who is running late for a beheading. Granted we don’t need chapter upon chapter discussing how crappy it is to travel across the Great Plains, but there were times where it seemed people just teleport to different places across the map.

And yet Alan more than makes up for it with the final battle at the end of the book. I’ve noticed a trend with certain alternate historians to skip over the details of big set piece battles, but Alan doesn’t do that. We get several chapters dedicated to seeing how the fighting styles of the Roman Empire, the Mongol Horde and the assorted tribes of Nova Hesperia (both those allied with and against Rome) would fare in an epic fantasy battle that should make anyone who likes to ask “what if” satisfied.

So if you want to read an epic tale of loyalty, honor and war set in an alternate version of North America in the 13th century, then go check out all three books of the Clash of Eagles trilogy by Alan Smale. It truly embraces the high concept story that alternate history is famous for and I don’t think you will be disappointed.

The Peyti Crisis: Rusch deftly manages to handle a large cast of characters without missing a beat

A Pride of Lions is an action filled story with unforgiving realism where nobody is safe and the future of mankind rests in the hands of one determined woman with an agenda.

Terrestrial Flying Saucer Technology Could Revolutionize the Way We Fly