In this week’s viewing: 18if has a Twilight-Zone-worthy surprise, Katsugeki Touken Ranbu throws away everything great from last week, and more! 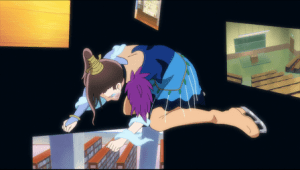 18if #5 – Mirei Saegusa was feeling overwhelmed by the pressure of being not just a star athlete, but a full-on star. So one day, she fell asleep to escape into the life of a normal 18-year-old. Oddly, though, Haruto hasn’t heard of this national celebrity. In hindsight, the explanation was front and center all the time, but this episode did an excellent job of not pointing it out too strongly.

I was betting on Haruto to eventually turn out to be much older than he looks. Instead, it’s Mirei who’s from a long time ago. After the last girl who missed out on school imagined a school festival run by anthropomorphic animals, and all the other weirdness the dream world has been throwing out, it’s not quite as obvious as it should be that the odd look of the college students is due to the dreamer being from an earlier decade. Well played, 18if.

Haruto mentions that he’s a college student. (In fact, one of the textbooks on his bedside table is one of the same ones Mirei dropped when he bumped into her.) All this means, of course, is that he was a college student when he entered the dream world. He might be even older than Mirei.

We still haven’t seen anyone who might be Haruto as he is in the waking world– except maybe if he’s another aspect of Kanzaki’s consciousness. That would mean Lily is really his sister Yurina. 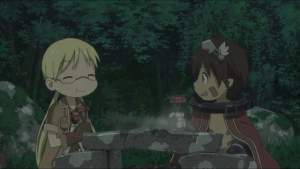 Made in Abyss #5 – Now that Riko and Reg have passed into the second layer, the Abyss gets busy trying to do a proper job of killing them. If it’s not carnivorous bird-things trying to eat them directly, it’s territorial primates chasing them into a fatal drop. And if not that, then Riko is almost taken out by the effect of being carried upward.

Later she mentions that the effects aren’t so bad if one ascends at the edge of the pit, away from where the force field is strongest. It’s almost like it’s the force field that’s responsible for the horrifying effects of ascending from the depths, not the Abyss itself. Like the people who, as Habo said last week, originate from the Abyss aren’t welcome at the surface. Like some power is trying to make them go back where they came from.

But, in between brushes with death, there’s always time for some tasty food. Well, this is a survivalist show, in a way, and they do traditionally spend a lot of time on trying to find food, cooking it, and then remarking on how good it tastes. 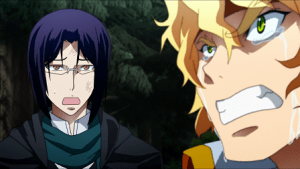 Chronos Ruler #5 – This may be based on a Taiwanese comic, but it sure has all the shōnen manga fighting tropes down this week. Combatants build ever more elaborate attacks from a simple set of principles, then stop to explain them after they have gotten the better of their opponents. A fight can be won by cleverness, or by sheer emotional force. Manly tears are shed!

It’s also a long-standing trope that an early opponent can promptly become one’s best friend after being defeated. And also that there are fighters who are all about strength and not about intelligence. It is not traditional to go quite so overboard in dramatizing what a total idiot Kiri’s opponent is. It is, however, pretty entertaining.

So the end result of the fights is that Victo gets to live, and Kiri acquires yet another embarrassing family member. I feel sorrier and sorrier for Kiri. 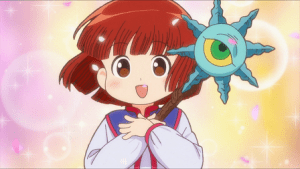 Magical Circle Guru-Guru #5 – Kukuri completes the Series of Magical Challenges and, in a moment played surprisingly straight, levels up. Meanwhile, Juju packs up her clerical gear and joins Nike on the fetch-quest for the magical bracelets to save her town. Along the way, it is demonstrated that the god of Dohgma Village is definitely not all peace and love. In fact, Juju is so overpowered that she needs to step aside for a bit so she doesn’t break the story.

There’s a moment in this episode which feels ahead of its time, remembering that the source material here is from 1993. After Nike’s attempt to “show your power”, the on-screen text sardonically comments, “For a moment, he was almost the main character.” The pattern of the bumbling male Chosen One assisted by a smarter, more powerful girl or woman who’s better qualified to be the hero in every way except for not being Chosen is well-recognized nowadays. Compare Nike to Kukuri or Juju and you can see the pattern happening again– and Guru-Guru is self-aware enough to point it out. 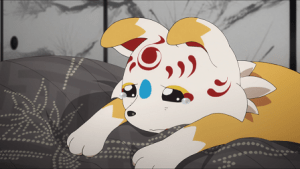 Katsugeki Touken Ranbu #6 – That was a letdown. If even setting Edo on fire and killing all of Katsu’s retainers didn’t change history, what exactly is the point of going back and fighting the Retrograde Army? History seems to be resilient enough to take care of itself.

The net result of the Second Unit’s mission is that Tombokiri was nearly killed, but can be saved with a liberal application of Sufficiently Advanced Technology, and Kanesada is angsty for a bit. Konnosuke compares culinary notes with the other foxes, and everyone else just generally hangs out.

Now the focus shifts to the First Unit, which is about to be dropped into the middle of the struggle to unify Japan in the 16th century. So far, we have the guy who’s been passed over for a promotion, Yagen’s little brother, and the guy who has self-esteem issues over being conjured from a replica sword. Not quite as fun a bunch as the Second Unit, at first blush, but we’ll see.

A whole heck of a lot happens during Season 7, Episode 23 – The Gorilla Dissolution – with a featured guest appearance from Wil Wheaton.

Let’s get one thing out of the way up front. I am crazy about Jeff Carlson’s writing. I even tipped him as my favorite lesser-known SF author in a recent interview here on Amazing Stories. Tying that hangman’s noose a bit tighter, I stated at the time that I thought Carlson’s best work was still ahead of him.

Should Big Brother Get Bigger?