I’d been an avid reader of science fiction (and what little fantasy was available, think LotR before Brooks) for about 6 or 7 years before I became aware of that thing we used to call sub-text and now refer to as message fiction. 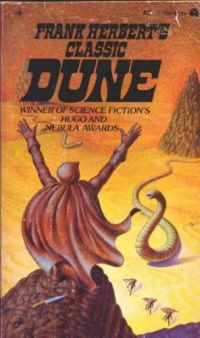 I remember the moment when I came to understand that a novel could be written on multiple levels quite well.  I hit the bookstore looking for an SF novel that would last me for the entire flight from Kennedy International to Tel Aviv and the thickest (and most intriguing) un-read novel on the shelves was Dune.

Flight time was close to 12 hours, and Dune looked like it might just last the whole flight – if I took time out for meals, window-gazing and napping, which everyone assured me I would be doing (not;  though truth to tell, looking at the ocean from miles in the air gets old pretty fast).  That being the case, I took a couple of other books along, just in case.

I cheated too.  I cracked Dune before I got on the plane (and was sorry I had, as an uninterrupted, straight-through reading of Dune is a different experience from the typical sessions reading).  But finish it before touchdown I did.  So overwhelmed was I that I chose not to do any more reading for the remainder of the flight so that I could continue to bask in the glow of that really good read.

I decided I wanted my eyes to be all blue, that while a bit yucky, stillsuits were pretty cool, that had I been Paul, I’d not have married Irulan, court intrigue or no, and that riding a worm was something I really wanted to do.

Arriving in a desert country right after reading about a desert planet was a heady experience.  Hot and humid (New Jersey summers beat the pants off of Thailand during the rainy season, let me tell you) sucks;  hot and dry is an entirely different animal (one my body apparently responds well to;  I’d not have felt out of place with T.E. Lawrence’s gang).  Later, during the trip, standing atop the summit of Masada in 120 degree (f) temps, I knew what it was like to wander the sand seas of Arrakis.  No worms appeared to swallow our tour bus, but it was possible to believe that it could happen at any moment.  On the trip down from Masada, I practiced walking in patternless steps.

Environmentalism was a big subject at the time and I remember coming to the realization that many of the things explained to Paul and Jessica by Dr. Kynes about the environment of Arrakis and the role that the worms played in that ecosystem, sounded an awful lot like many of the things I’d been reading about the real environment;  of how everything is intimately interconnected,  that the death of the worms meant the end of the Spice, (which takes the interdependency of species to a galactic level) of how Maud’dib lived in harmony with the environment and represented great wisdom of the ways of the desert.  DDT use had only been banned a couple of years before and everyone was still wondering if that might not have been too late.

References to Silent Spring were much in the news and I began to understand that while Dune could be read as a great operatic space tale (even if it did lack in space battles), it could also be read as commentary on the state of the environment.  That the Emporer represented the status quo and Paul the wind of change necessary for survival;  one took power from manipulating the environment, the other by living in harmony with it.

My time in Israel also corresponded with the oil crises, Cold War wrestling over oil, the rise of OPEC flexing its muscles (the oil embargo) and much speculation over WWIII starting in the Middle East over oil.  Dune can also be viewed as metaphor for those geopolitical happenings, and much has been written on this contention.

Years later while in college I learned the art of literary critique (which essentially boils down to making a guess as to the underlying sub-text of a work and then finding passages form that book that support your argument). Critical analysis presumes that there is always at least one sub-text to every piece of literature.  (Hint:  you can NEVER go wrong with Freudian analogies because the baseline sub-text of every piece of literature is sexual tension).

For those never subjected to the requirements of an English Lit. degree, allow me to paint a clear picture:  there is always a sub-text to every piece of literature.  Always.

You can call it sub-text, message-fiction, levels, metaphor, analogy, whatever.  But it is always there.  Consciously or unconsciously on the part of the author (and I’ve read plenty of interviewers where the interviewer asks “isn’t your book really about…?” to which the author responds something like “Interesting.  I never thought of it that way before”, to know that the unconscious is pretty common and entirey valid); it may be the result of a deliberate attempt to sneak a lesson in, or merely the influence of a case of indigestion, but it is always there.

I raise this today because I decided to re-read Robert Adam’s The Coming of the Horseclans, the premiere novel in a post apocalyptic series, written by an author who, were he alive today, would no doubt occupy a place perhaps one step below Heinlein in the alt-rt/puppy/pulp renaissance pantheon. 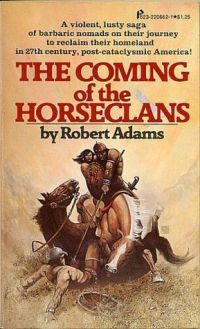 Horseclans was a pretty well-received series when first introduced, eventually 18 novels were produced for the series;  Adams was quite popular at conventions and parties and was known to take a pretty conservative, libertarian line.  (He is also associated with at least one deliberate harassment at a convention party, threatening fans who did not agree with his politics.)  I was quite struck by some of the statements found in his introduction to Horseclans:

The following is a fantasy, pure and simple. It is a flight of sheer imagination.  It contains no hidden meanings and none should be read into it; none of the sociological, economic, political, religious, or racial “messages,” with which far too many modern novels abound, are herein contained.

Horseclans was first published in 1975.

Huh.  Really?  And you wrote that about a novel that refers to the inhabitants of the civilized world as “dirtmen”?  And you imbue those dirt people with characteristics that you consider to be disgusting?  (When really, their only true fault is recognizing that pure libertarianism is an impossible proposition.)

I’ve not been able to finish my re-read of Horseclans.  It’s “messages” are so heavy-handed that they bounce me right out of the book.

Unfortuately, this is what happens once you’ve learned to read beyond a superficial, or dare I say at a “mature” level.  I think this is where that expression “ignorance is bliss” comes from.