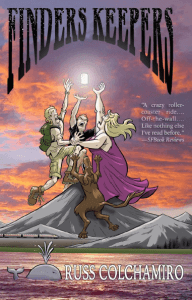 Swearing in a humourous piece of fiction is fucking complicated.

I’ve read a lot of books and essays about how humour and laughter work; a flaw with most of them is that they assume that laughter is a single phenomenon that can be explained by a single, over-arching theory. But, when you think of all of the contexts in which you laugh, it should be obvious that the responses to different types of humour are, well, different.

For example, a common comic device involves juxtaposition of the absurd: putting two things together that don’t ordinarily go together. This requires a lot of cognitive effort to laugh at: you need to appreciate the contexts of the two things separately as well as an underlying logic to why they have been put together. Laughing at obscenity, on the other hand, seems to be a nervous reaction to the breaking of a taboo, a way of relieving the tension of hearing or seeing something society tells you that you shouldn’t be hearing or seeing (thank you, herr Doctor Freud).

In the novel Finders Keepers, Russ Colchamiro combines crude humour and scenes of sexuality with some sophisticated writing. While certainly ambitious, it often didn’t work for me.

Finders Keepers is about a jar containing the essence of the universe which is accidentally dropped into a cave in New Zealand. At its core, it’s about a group of beings who work on creating the universe who have been exiled to Earth, and their interactions with the human who has found the jar and the people around him.

The story takes place in two realms: Eternity, a space outside of space and time where the creation of the universe unfolds in a familiar kind of bureaucracy; and on Earth in 2005. The structure, which bounces between scenes of people exiled from Eternity trying to bamboozle unknowing humans into helping them find the jar, which they believe is their ticket back to their home, and scenes in Eternity leading up to the creation of the Milky Way, was quite clever.

Unfortunately, the smart writing in Finders Keepers is often balanced by writing that is not so smart. For example, Colchamiro has a bad habit of reaching for easy stereotypes when introducing characters.

There is, for example, Danielle, a flighty black woman who speaks in an exaggerated street jive and drops f-bombs and mf-bombs whenever she gets worked up, which is often. I don’t know any blacks of either gender who speak like this. More to the point, whether or not they do exist, this portrayal of them in art has become offensive. (I also don’t really understand the relationship between characters in Eternity and characters in Time: how does it make sense that there is a street-talking woman before the existence of streets?)

Jason, to use another example, is a young man who still lives with his parents. Again, this is an easy way for the author to signal that Jason is “immature.” Whether it was ever true (it’s worth keeping in mind that extended families have been the norm for most parts of the world for most of human history: the nuclear family was primarily a product of post-WWII western prosperity), it certainly isn’t now; millenials and Xers are finding tremendous barriers to independence that have nothing to do with their willingness to grow up.

To give Colchamiro credit, both characters grow a little over the course of the narrative, partially escaping their stereotypes to become more fully rounded. Not far enough for me to be able to forgive how they were introduced, but still. There are other characters who grow more, but they are problematic for a different reason: the first third to half of the novel is played as farce, often sexual, usually profane; but characters in these kinds of stories tend to focus on a single exaggerated feature of a personality and, therefore, do not traditionally grow emotionally. The emotional growth of some of the characters in the later part of the book is at odds with the farce of the early part of the book.

Finders Keepers does contain a couple of well-realized, very entertaining comic scenes. The ones with the stoned dolphin and the mischievous whale, for instance, was hilarious (and I’m not just saying that because the dolphin’s name was Ira). The characters were droll, and, although perhaps a bit overplayed, the reaction of the humans to them was quite amusing.

There was also a scene (told over two chapters) towards the end of the novel where several characters come together in a New Zealand kitchen that was very funny. The different motivations of the various characters play off of each other in surprising and delightful ways.

When he’s not reading the fine line of offending the reader, Colchamiro has a nice way with an ironic observation. For instance: “Jason loved this plan. He really did. He loved it so much, in fact, that just before passing out, he almost ran out and did it.” (90) Scenes set in Eternity often have a nice edge to them; the satire of bureaucracy is handled well. Colchamiro also occasionally indulges in wordplay: “No. What’s dumber than doofus? A loser? A fool? A foolfus. Yep. A fucking foolfus.” (300)

Then, there are the jarringly abrupt shifts in tone. To use one egregious example, at one point a minor character says: “Any woman I marry’s gotta swallow and do anal. If not, the wedding’s off. But not before I have a go at the bridesmaids.” (223) On the very next page, Jason, an American from New York, is asked about 9/11. The next page and half is a very sober reflection on that horrible event. Then, we return to the raunchy comedy. This is not the only example; a brief section on the Anne Frank Museum is equally misplaced in this narrative. These kinds of juxtapositions are incredibly jarring.

In Finders Keepers, Russ Colchamiro does a lot of things well. If he would cut down on the sex farce and foul language and concentrate more on building comic scenes driven by characters, he could be a brilliant writer.

Voyager’s golden disc prompts aliens to seek Earth in Mi amigo Quyllur, a film based on the eponymous novel by Renato Mendizábal Guillén

Space junk: We could have a recycling station in space by 2050