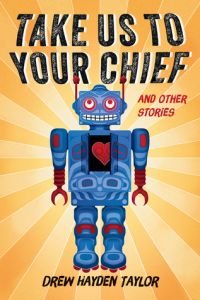 In the Venn diagram that contains science fiction and Native fiction, the two circles barely meet. Perhaps it’s because science fiction is considered frivolous, mere entertainment, while Native writers have pressing concerns about their people’s ongoing oppressive relationship with the dominant culture that require serious treatment. In the short story collection Take Us to Your Chief, Canadian author Drew Hayden Taylor proves that Native science fiction can be both entertaining and serious about Native history and life.

The stories in the collection all deal with common science fiction tropes: alien invasion (“A Culturally Inappropriate Armageddon”); superheroes (“Superdisappointed”); time travel (“Petropaths”); and artificial intelligence (“I Am… Am I”). The title story is a first contact story. And Hayden Taylor can do hard science when called upon: “Mr. Hughes had spent half of last class talking about Kepler-186f. It was a planet located in the Cygnus constellation, about 490 light-years away. Very far as the crow flies but in space terms just a couple of blocks away. It was one of the first planets to be discovered with an orbital radius similar to Earth’s in the habitable zone of another star. According to experts, it was located in what was called the Goldilocks Zone, a reference to Goldilocks and the Three Bears.” (116)

Although the tropes are well worn at this point in science fiction’s evolution, Hayden Taylor’s Native point of view and artistic sensibility make them fresh again. “I Am… Am I” is a good example: a couple of computer science researchers find an emergent AI in their machine. As it becomes increasingly aware of its existence, it tries to find spiritual meaning. So far, so typical. When it considers monotheistic religions, it finds that it can have no place in them because only humans, not the AI, were created by god with a soul. It is drawn to Native spirituality, which advocates the idea that all objects have a soul; unfortunately, this comes with a history of repression and outright genocide. In finding its soul, the AI sadly learns a very human trait: despair.

“Mr. Gizmo” also deals with despair. It is a story about a teenage Native contemplating shooting himself. Over the first few pages, we learn what brought him to this point: the death of his father in jail (for a crime that he may or may not have committed); the disappearance of his mother and the indifference of the wider society to her plight; his own lack of opportunity. In a twist worthy of a Twilight Zone episode, one of his toys, a small robot the man in his childhood had named Mister Gizmo, tries to talk him out of shooting himself.

Mister Gizmo has a sarcastic voice that is very funny (the collection is peppered with smart humour). In less assured hands, the serious and humourous elements of the story might have clanked together, diminishing both. However, Hayden Taylor is a skillful storyteller, and the shift in tone is handled so deftly that the story as a whole is very satisfying. (The shift also helps to make a bleak story hopeful; while in no way sugar-coating the reality of the character’s life, the story makes the argument that life is worth living despite its travails.)

Non-Native readers may be uncomfortable with such stark portrayals of Native reality, since the dominant culture in which they – we live is responsible for it. I must admit that I had a moment of serious discomfort reading the story “Dreams of Doom.” The story is a paranoid conspiracy thriller (think: The Parallax View and other 1970s films) revolving around a plot by the Canadian government to pacify Natives using technology built into dream catchers. At one point, the Canadian government puts out a story that some of the people who work on the small Native newspaper that has been leaked information about the plot were actually terrorists, giving it an excuse to get them out of the way.

My knee-jerk reaction was, “The Canadian government wouldn’t do that!” Well, no. One of the hallmarks of paranoid conspiracy stories is that some of the workings of the plot inevitably push the boundaries of believability to the point of absurdity, but this does not diminish their power. And, in any case, the Canadian government has done a lot worse to Natives over the years, so why should I get so worked up about this?

Although undoubtedly not Hayden Taylor’s intent (which was to explore ideas and tell entertaining stories that reflect his reality), I would argue that the possibility of making non-Natives uncomfortable is a feature of Take Us to Your Chief, not a bug. At its best, literature can help us to understand the lives of people who are not like us by showing us what those lives are like from the inside out. A book like Take Us to Your Chief could help non-Natives understand Native lives much better than a dozen newspaper articles about life on the Res, or 100 Royal Commissions on the treatment of Natives by the government.

Not bad for a genre considered mere entertainment.