The Alchemist is an excellent example of the true magic that happens when literary fiction and genre fiction work together.

Well, here we are at my penultimate article for Amazing Stories. My last book review to be posted around these parts. I thought I’d pick something to end on a high note. I figure, don’t we all need a little positivity and optimism in our lives? So, today we’re going to take a look at a book about following your dreams, no matter where those dreams take you. I’m reviewing The Alchemist by Paulo Coelho. 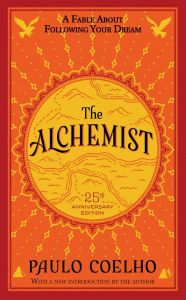 The Alchemist follows a young shepherd form Andalusia named Santiago. He considers himself generally happy, but he’s been having a series of early prophetic dreams. On a whim, he goes to see a gypsy fortune teller, who tells him that he is to seek treasure in a foreign land. Santiago doesn’t think much of this, until he meets an ancient king named Melchizedek. He encourages Santiago to follow his dreams and seek his personal legend. Before long the young Spaniard finds himself on a journey across North Africa to see the Pyramids of Giza. Along the way he meets a colorful cast of characters who help him on his journey as he learns the secret language of the universe.

Before we begin, we should talk a bit about Paulo Coelho’s life. From a young age Paulo knew he wanted to be a writer. They had Paulo committed to a mental institution in hopes of curing his desire to write stories. Among other things, poor Paulo was subject to electroshock therapy. Despite all of this, he never wavered in his convictions. Paulo Coelho followed his dreams, and today is a very successful, widely beloved, international bestselling author.

So yeah, there’s definitely some semi-autobiographical influence on the story’s message. It is, I would think, a very good message at that. We are often told to be realistic with our expectations and dreams, but in many ways, this can become a self-fulfilling prophecy. Many people fail to achieve their dreams not because they lack the capacity, but because they never try in the first place. Sometimes, the most important step on the journey of 1000 miles, is the very first.

The writing style reads very much like a modern-day fairy tale or myth. Some of you might dismiss The Alchemist because of this. However, I would caution you to keep in mind changing language. Fairy tales and stories of mythology often contain deeper truths despite their surface entertainment values. After all, they were one of the ways ancient peoples tried to make sense of their lives and contemplate what it meant to be human. That is one of the many reasons such stories are retold even in our modern times.

Speaking of mythology, The Alchemist actually follows The Hero’s Journey rather well. Santiago receives his call to adventure, North Africa is the land of adventure, Santiago faces numerous challenges that advance his quest, he is tempted to leave his quest when he meets a beautiful girl, he has to learn the secret of the pyramids on his own, and he returns home wiser than when he left. It’s also a bit vague as to when the story takes place, other than that is seems to be set some time in the past.

The above isn’t a summary of the novel’s events; rather, it points out the highlights of how Santiago’s journey relates to The Hero’s Journey. There’s still plenty to discover on your own. One of those things being all of the symbolism and references scattered throughout the novel. For example, there’s a critical point where Santiago discovers some coins beneath a sycamore tree in a church. Similarly, Santiago’s name and journey can count as reference to the annual pilgrimage at Santiago de Compostela. In other references, we learn a little about Bedouin culture when Santiago spends some time with a tribe of Bedouin. When Santiago finally meets the titular alchemist, he learns a bit about Hermetic philosophy.

I liked how, even though it can do some amazing things, alchemy is presented as a deeper understanding of the true nature of the world. Edward and Alphonse Elric would certainly approve.

Perhaps more than anything else, the central message of The Alchemist is about not being afraid to follow your dreams. There’s a really great quote that summarizes it all: “when you really want something to happen, the whole universe will conspire so that your wish comes true.” Maybe it does sound naïve to put such stock in dreams, but doesn’t everything start as a dream? Rockets and submarines started out as mere dreams created by men like H.G. Wells and Jules Verne, yet look how they inspired inventors like Robert Goddard. Stay true to yourself, seek your personal legend, and a dream can be a dream come true.

The Alchemist has proved to be an international best seller and has been translated into numerous languages. There have been multiple attempts to adapt it into a film, but for one reason or another they never get too far. There is an illustrated edition with art created by the famous French comic book artist Moebius. He tried to get Paulo Coelho to consent to a full graphic novel, but Coelho turned him down. However, in 2010 a graphic novel adaption was finally released by Derek Ruiz and Daniel Sampere. The Alchemist has also been adapted into a play by The Cornish Collective in the UK and Ashvin Gidwani Productions in India. Both productions were met with critical acclaim.

And for those of you, like me, who love your audiobooks, there is an audiobook adaption. And who do we have narrating this lovely story for us? Why, Jeremy Irons of course! It goes without saying that he does an excellent job.

The Alchemist is an excellent example of the true magic that happens when literary fiction and genre fiction work together. Or perhaps it is an example of the alchemy of combining literary and genre fiction? Either way, it is a book I cannot recommend strongly enough. It helped inspire me through some tough times in life, and it is an entertaining read. I know that this might not have been the most analytical review, but The Alchemist is really something you must experience for yourself. I’ve taken you as far as I can, the next part of your personal legend is yours alone to write.

And so, we’ve reached the end of my final book review for Amazing Stories. Just one more article to go and that’ll be it for me around these parts. That last article, of course, being one final edition of The Audio File. I’ll see you one final time next time.

Three different speculative fiction anthologies may be of interest to Spanish speaking readers.

As he has done for the past several years, Steve looks back (without anger) at the previous year’s columns, and hopes you found reading them worthwhile. And now: To Infinity—And Beyond! as someone once said!

All Work and No Play Makes Jack a Dull Writer