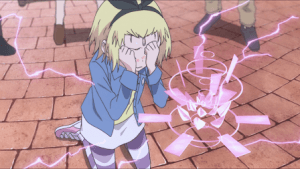 Alice & Zoroku #8 – Now that Asahi and Yonaga are settling into their new lives, it’s time for some light-hearted hijinks as they try to navigate Harajuku for a visit to Zōroku’s office. (Yes, by the way, it’s considered completely reasonable in Japan for kids their age to be roaming the big city on their own.) At least it is for a minute or two until a new arrival turns everyone but Sana into mindless zombies.

Hatori has been pushed hard for academic excellence ever since starting school (also normal in Japan), to the point where her parents are upset that she didn’t get into a super-exclusive primary school. Her parents clearly have other issues, but, as kids will do, Hatori believes her failure is the whole reason they don’t get along.

When she starts being able to manifest a Mirror Gate, Hatori makes sense of it in terms of a fairytale, which turns out to be appropriate when she starts overdoing it. Like a fairytale gift, when misused, her power has a dark side to it. After too much time under its influence, her parents have no free will at all.

Sana is able to reverse the spell somehow, but she’s having her own trouble with her Mirror Gate. Not only is its form changing, she seems to be losing control over it. It’s like the alien creature that first manifested in the lab basement and the little girl it developed into are becoming two separate beings. Does this mean Sana has to give up her powers eventually? I hope not; I’m hoping she can follow the example of Ichijō, who is able to balance magical powers with adult life. 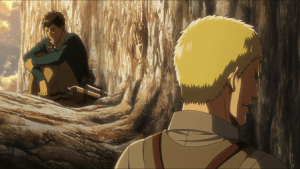 Attack on Titan #34 – What could be worse than losing your arms, being kidnapped by a couple of your most dependable comrades who have turned out to be spies, being thrown in with another prisoner you can’t trust, and finding yourself marooned in a giant tree, miles from civilization, surrounded by monsters? Realizing that one of your captors is insane.

Whatever the situation was in Reiner and Bertholdt’s hometown, they clearly thought of Eren’s people as just a faceless enemy to be conquered. After five years living inside the walls, they’ve come to see that the other inhabitants are just as human as themselves. They’re both dealing badly with that information. Bertholdt is still loyal to his friend, but otherwise seems to be losing the desire to fight anyone. Reiner, though, is levelling up from PTSD to full-on psychosis.

And Ymir isn’t spilling any beans that could help Eren. I can’t blame her for waiting to see how things play out; if she commits to the side that then loses, things will go badly for her. And Christa/Historia, perhaps. 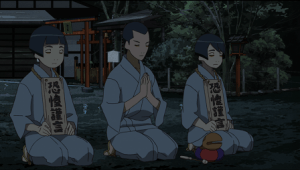 The Eccentric Family 2 #8 – With Sōun Ebisugawa gone, his son Kureichirō and Yaichirō see a chance to lay the feud between their two families to rest as well. And that means resurrecting Sōichirō Shimogamo’s idea for making peace, which was to marry Yasaburō to Kaisei Ebisugawa.

In the original The Eccentric Family, Yasaburō and Kaisei were friends, and resigned to eventually being married, but the engagement was put on hold after Sōun’s part in Sōichirō’s death was uncovered. Yasaburō was just as happy to put it off because Yajirō was in love with Kaisei, and Yasaburō himself is fascinated by Benten.

But it turns out that Kaisei does have real affection for Yasaburō, and Yasaburō is in deep denial about his own feelings. The red fur of fate (a play on the “red thread of fate” which is said to tie together the pinky fingers of couples destined to be together) is just too big a thing for him to think about; indeed, Kaisei is the one thing that can shake him so much that he can’t hold his human form.

That leaves the matter of Benten and the Nidaime. They’re on speaking terms enough now to make plans for an evening out together, but only so they can be arrogant jerks to each other. This still doesn’t look like it will end well. 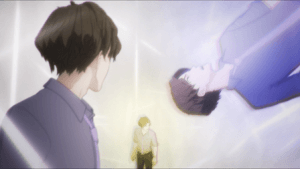 Kado: The Right Answer #7 – A wild dudebro appears! Added to the mix this week is the head of a new-media company which is basically Google, only considerably more socially ept. Because you just know that actual Google would have been sending its own drones to Kado by day 2 or 3, trying to force its way to the front of the first-contact queue, and would only deign to start working through locals after being literally shot down by the JSDF.

zaShunina’s next gadget, the sansa, helps humans perceive higher dimensions. The ability to go without sleep turns out to be a secondary effect. Humans have some kind of higher-dimensional existence already, the idea goes, and by being able to perceive that, it is possible to access those other slices of oneself and offload the sleep cycle to them. It’s like being able to coordinate with your alternate-universe selves, like in Anathem, but working from a geometric metaphor like Flatland instead of from quantum physics. Although from another angle, it’s just another form of the myth that we only use part of our brains.

After the heavy sf, the episode takes a break with a summer festival. A fox mask is just the thing for zaShunina, because the fox is the messenger of Inari, god of rice, agriculture, and industry in general. The downtime also gives Tsukai an opportunity to set herself up as an opponent of progress. She wants Shindō’s help in persuading zaShunina to leave — hopefully for some actual reason other than “but change is weird”. 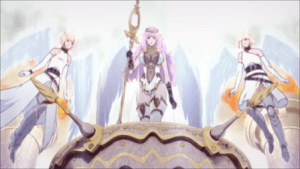 Rage of Bahamut: Virgin Soul #8 – Nina, Mugaro, and Kaisar all attempt to help in their own ways, but the demon rebellion is over and everyone is carted off to prisons. Mugaro is collected by the forces of Heaven, where Gabriel is planning to use their power to get humans back worshipping the gods like in the good old days. Azazel gets sent to the torture chamber, and Nina and Kaisar are added to Charioce’s collection of major characters. Nina’s new neighbor is Joan of Arc, and Kaisar’s is Nina’s teacher, the main character from the original Rage of Bahamut, Favaro Leone.

All this happens only because it conveniently slips Nina’s mind (or the writer’s) that she’s super-strong and super-fast even in human form. If she can carry a stack of stone blocks on each arm, she should have no trouble ripping off those manacles, grabbing Kaisar and hightailing it into the countryside.

I suppose she had to wind up in that dungeon somehow so she could morph into a dragon later and free the important prisoners. But sheesh, that was awfully lazy writing for the second week in a row.