Three Ghosts in a Black Pumpkin by Erika M. Szabo and Joe Bonadonna is a Halloween adventure that can be read year-round. 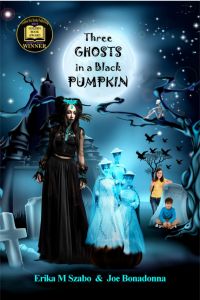 When the opportunity to review Three Ghosts in a Black Pumpkin by Erika M. Szabo and Joe Bonadonna first arose, there was some admitted apprehension when considering work with an obvious seasonal focus. Stories with a Halloween theme may garnish a little less interest in Spring and Summer than they would in the Fall. Fortunately, after reading this book, that trepidation was proven invalid.

Published in March of 2017, this Golden Book Award winner should gain plenty of momentum by the time Halloween rolls around. Targeted for the younger audience with simple illustrations by co-author Szabo and the overall tone of a classic fable, the story maintains just enough mystery and magical elements to carry readers through any season.

Young cousins Nikki and Jack are drawn into a nightmarish adventure when a talking skeleton named Wishboine mysteriously appears on their grandmother’s porch and soon guides them through a magic gate on a quest. The ghosts of the Trinity of Wishmothers are trapped in a black pumpkin, and the only way to free them is by using three magic wands that had been long since hidden in three separate locations by the skeleton. Our young heroes must journey to the Red Crow Forest, the Tower of Shadows, and the Cave of Spooks before the evil Hobgoblin beats them to the wands and gains ultimate power.

In true fairy tale fashion, the colorful characters are labeled with whimsical if not prophetic names like Grandma Sweet (the archetypal grandmother), Catman (you guessed it, a cat man), and the Wishmothers Prunella Pickles, Gladiola Scales, and Minerva Terrapin. Combine this naming technique with foreboding locations like the Realm of Spirits and Goblin Acres, and readers will quickly get a feel for the lighthearted approach of the authors and the intended age group of readers.

Considering the younger readers whom this book is obviously catering to even though older readers can enjoy it too, there are a few moments of gratuitous language that some parents may consider inappropriate and unnecessary. This story does not include any over-the-top vulgarity, but the occasional expletive voiced by the younger characters does seem out of place and a noticeable distraction from the overall plot.

Three Ghosts in a Black Pumpkin is indeed a Halloween story, but the theme of the book centers more around the quest for three enchanted wands and the magical characters our heroes meet along the way. This, and the colorful characters created by Erika M. Szabo and Joe Bonadonna makes this an adventure that can be read year-round. Billed as the first book in the Creepy Hollow Adventures, one can only imagine what will come next.

Book Review: Another Girl, Another Planet by Lou Antonelli

Mad Shadows: The Weird Tales of Dorgo the Dowser Joe Bonadonna iUniverse trade paper $19.95 ebook $4.99 Kindle Nook When I first came across this book, the title made me think it might be something along the lines of Manly Wade Wellman’s John the Balladeer stories, more commonly known as the Silver John stories. It […]

The novelization of Man of Steel by Greg Cox is a book looking for an identity. The obligation to remain loyal to a script while remaining faithful to the character is an improbable task – one reader’s must realize if they are to accept the work.