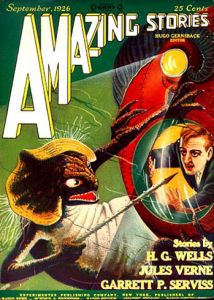 A strange creature resembling some sort of bipedal amphibian clings to the outer shell of a red vehicle. It clutches a spear in one of its webbed paws, which it thrusts towards the vessel’s window. Inside the craft is a terrified man who stares out at the menacing creature. At first glance, the viewer could mistake this for an illustration of an astronaut encountering an alien; on closer examination, however, the scene is taking place underwater. It was September 1926, and Amazing Stories was plumbing the depths for more pioneering science fiction.

In this month’s editorial, Hugo Gernsback responds to the readers who wrote in opining that Scientifiction would have been a better title for the publication than Amazing Stories. He reveals that he had considered the title Scientifiction at an early stage of the magazine’s development, but that market research persuaded him to abandon it:

The name “Scientifiction” would undoubtedly frighten many readers who would perhaps otherwise be interested in this new type of fiction. After mature thought, the publisher decided that the name which is now used was after all the better one to influence the masses, because anything that smacks of science seems to be too “deep” for the average type of reader.

Gernsback maintains that this was the right move, with Amazing Stories running to a hefty 100,000 copies a month despite its recent vintage. “A totally unforeseen result of the name,” he adds, “was that a great many women are already reading this new magazine. This is most encouraging.”

The Purchase of the North Pole by Jules Verne (part 1) 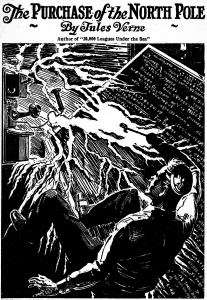 The third Jules Verne adventure to be serialised in Amazing was the 1889 novel known in French as Sans dessus dessous. Two English translations of this book were published in 1890: an American one entitled Topsy-Turvey and a British alternative dubbed The Purchase of the North Pole. Amazing plumped for the latter translation, which has since fallen into obscurity – Topsy-Turvey is easier to obtain these days.

The novel begins with a dispute between Mr. Maston and Mrs. Scorbitt about the place of women in mathematics and science. Maston maintains that, while there have been woman mathematicians of note, the female sex is not suited to scientific genius: “with her cerebral conformation it is not in woman to become an Archimedes or a Newton… in seeing an apple fall, Mrs. Scorbitt, a woman would have only one idea – to eat it, after the example of our mother Eve.”

Meanwhile, the North Pole has been put up for auction. As multiple countries place their bids, the novel makes a satirical point by noting that the indigenous population is not consulted by the various powers that feel themselves entitled to the region. Amongst the interested parties are Maston, Scorbitt and the Baltimore Gun Club – this last group having previously starred in Verne’s lunar adventures. Banding together, they place the winning bid on the North Pole.

Their aim is to mount an expedition to the Pole in the hopes of finding a continent rich in coal. While working out the particulars of this plot, the Gun Club hits on an idea that will make the frozen north a little less inhospitable: they will alter the Earth’s axis, allowing the sun to thaw the Arctic. And so the first instalment closes, promising another wild yarn from the Gallic master of scientific romance. 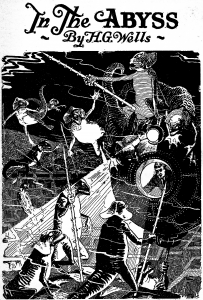 In this 1896 story by H. G. Wells, a deep-sea diver named Elstead prepares to embark on a five-mile trip in an experimental vessel. After a brief discussion between two of his cohorts as to whether or not the object can withstand the pressure of the oceans depths, Elstead plunges below the waters – and fails to resurface, causing the men above to fear the worst.

Finally, twelve hours later, the vessel rises to the surface once more. Elstead is alive inside but battered and unconscious; only a week later is he sufficiently recovered to tell his bizarre story.

Upon reaching the seabed, Elstead encountered a creature that looked like a two-legged chameleon, capable of some sort of speech. The being and its fellow-kind set upon his craft and took it to a cave filled with houses made from phosphorescent bone. Here, they begin worshipping him; Wells’ narrative voice speculates that they had encountered humanity through maritime debris falling meteorite-like to the seabed, these gifts from the heavens contributing to their religious beliefs. Eistead later returns to the area on another diving expedition – this time, never to resurface.

For its first two thirds “In the Abyss” seems, as Wells stories go, remarkably Vernean. It begins with a detailed account of the deep sea vessel’s workings, followed by a lengthy description of the sea life encountered by Elstead – neither of which would have been out of place in a Verne story. In its final third, meanwhile, Wells’ description of the creatures and their city achieves a genuinely otherworldly note, as when we learn that their phosphorescent building materials “gave the place an appearance as if it were built of drowned moonshine”. That said, Wells does not explore their society beyond crude anthropological tropes: the primitive tribe worshipping the civilised explorer. “In the Abyss” is one of the Wells stories which, while not entirely coherent itself, did serve to lay the groundwork for later, more exploratory SF. 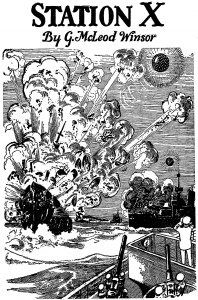 Station X concludes with the Martians moving ahead with their invasion of Earth by means of mind-controlled human slaves, while protagonist Professor Rudge warns authorities of this danger. The more thoughtful side of the novel shows once again at this point, as Winsor explores the effect that news of an alien attack has on the world at large. The response begins with ridicule, graduates to sober acceptance, and then to drastic measures: as aliens use radio to control human minds, the government makes ownership of a wireless device a capital offense.

But just as the earlier instalments tended to fall back on an air of eeriness and mystery rather than full exploration of the alien lifeforms, the conclusion skims over the full implications of the above events, instead pushing on with an action-packed climax. In a turn of events owing something to The War of the Worlds the Martians’ human avatars go up against the world’s navies in an ocean battle. Winsor comes up with some memorable ideas, including a gravity-defying bomb that the Martians guide towards their targets with devastating precision, but he never produces a surprise on the level of Wells’ Martian-killing disease. Instead. Station X’s aliens are routed in the most obvious way possible: through military strength.

A Columbus of Space by Garrett P. Serviss (part 2) 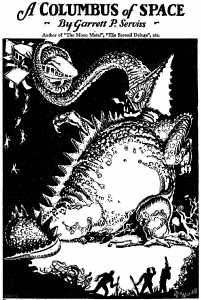 Amazing #6 continues Garrett P. Serviss‘ story of four Earthmen flying to Venus in an atomic-powered craft and encountering the humanoid locals. In this instalment our heroes accidentally shoot and injure the benevolent Queen Ala, accidentally kill another Venusian while making their escape, and almost suffocate Juba, their “faithful Indian” from the dark side of Venus. Despite these misadventures Ala and her subjects are quick to forgive the Earthmen, with only sneaky Ingra harbouring mistrust.

Serviss makes an effort to draw a distinction between the noble leader Edmund and his rather more trigger-happy companions, but even so, the expedition to Venus comes across as more of a catalogue of blunders than a voyage of scientific discovery. For the most part the story remains cut from the same cloth as countless non-SF adventure narratives of the day, although the end of this instalment introduces a stronger fantasy element when wicked Ingra leaves the heroes at the mercies of two monsters: one a tentacle-faced creature, the other a giant spider-like being. 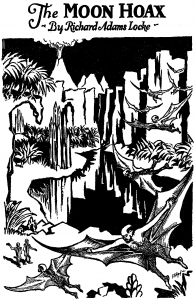 In 1835 the New York-based Sun newspaper ran six articles alleging that the astronomer Sir John Herschel had discovered alien life on the Moon. This was, of course, a hoax, but it nonetheless amused the paper’s readership and contributed in its own way to science fiction history. Although the articles were published anonymously, the “Great Moon Hoax” (as it became known) is now agreed to be the work of reporter Richard Adams Locke.

The narrative begins with the construction of a new telescope that allows unprecedented visions of the Moon, magnifying its subject to such an extent that it reveals the beings that live upon the surface (Charles C. Winn’s “The Infinite Vision”, printed in Amazing #2, uses a similar concept; one wonders if Winn was influenced by the hoax). First the astronomers identify a flower, then a forest of trees. After this come wildlife which roughly map onto terrestrial species such as bison and goats. More exotic is a species of “biped beaver”, capable of building huts and utilising fire. The highest form of life upon the Moon, it would seem, is a winged humanoid which the astronomers dub the “Vespertilio-homo, or man-bat”.

The articles, which ran twenty-four years before Darwin published his On the Origin of Species, largely ignore the effects of natural selection upon extraterrestrial life. In fact, Earth and the Moon have coincidentally given rise to the exact same species: namely, sheep. While examining the Moon, the astronomers witness “good large sheep, which would not have disgraced the farms of Leicestershire, or the shambles of Leanenhall-market…we could find no mark of distinction between these and those of our native soil”.

When adaptation to environment is mentioned it is given a religious angle, as when we are told that any humanoids on the Moon would be “provided by their Creator with some extraordinary powers of locomotion” – a theory borne out by the existence of winged men. Furthermore, the religion practiced by the lunar man-bats appears to be the one true faith, as it lacks “the masquerade, attire, and blasphemous caricature of controversial creeds”.

“The Great Moon Hoax” is not particularly accomplished when read as a story. But when viewed in context, it makes for an amusing episode in the development of SF.

Although Amazing Stories had, up until now, emphasised short stories, issue 6 skews primarily towards serialised novels; this trend carries into issue 7. By the end of the year, however, Amazing had renewed its focus on short fiction.

Let us conclude this trip back to September 1926 with the second piece of verse to run in Amazing: “A ‘Psalm’ of Light”, by an author credited simply as “Beta”:

Tell me not in Einstein’s numbers

Time is but an empty dream

And the space is dead that cumbers

And things are not where they seem.

Time is real, space is earnest

With which though perhaps discernest

But a jot of nature’s rule.

Not Minkowski, no nor Riemen,

Framed our destined end or way;

Nor yet Maxwell nor his demon

Fix the ether or its sway.

Order not one single flash,

Nor can Lorentz’ transformation

Whims of wranglers all remind us

“As the twig, the tree’s inclined.”

And howe’er their bents may bind us

“Naught exists without the mind.”

Wrangler’s art is set on axioms,

May have faults when brought to test.

Let us then not be excited

Just because the starlight curves:—

Euclid’s line was thought, not sighted,

Common sense, as ever, serves.

REVIEWS: THE IMPOSSIBLES (retro) and 9 TALES OF RAFFALON (new!)

The literary world of SF/F/H just got a lot more accessible with the first installment of Red Sun Magazine, a shining new star in the infinite galaxy of fandom.

Aaron. R. Allen has an engrossing sword and sorcery story to tell.

For the first time, scientists discover exoplanets in a galaxy far, far away