I most often read fiction in one of two circumstances: on public transit or getting my exercise on a stationary bike. Either way, I tend not to spend more than an hour reading at a time. This is not the optimal way to read novels, which require close attention over several hours, but it is perfect for short stories. It’s a shame, therefore, that the number of science fiction and fantasy magazines that publish them has contracted in the past few decades, and major genre publishers tend to shy away from putting out short story collections (although small Press and online publishers have largely filled this hole).

Short stories are not just baby novels; although made up of the same basic building blocks of longer stories (characters, settings, plot and, most importantly, words), they require a largely different set of skills to write well. Where novelists have the room to create vivid characters and complex worlds, short story writers can only suggest these things. Sure, stories of both lengths might start in the middle of important action, but, unlike the novelist, the short story writer doesn’t have the luxury of being able to write an extensive flashback to explain how the characters got there; explanations, where they are given at all, must be brief and include only the bare minimum of information to give the reader enough context to be able to make sense of the story.

Sub-plots are right out. 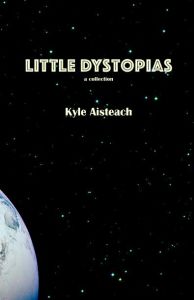 Like novels, short stories are not easy to write well. The stories in Kyle Aisteach’s collection Little Dystopias are what I think of as “meat and potatoes” writing: the prose is straightforward, with little embellishment, and the stories, which cover the science fiction, fantasy and horror genres, offer small variations on standard genre tropes. This kind of writing doesn’t generally appeal to me (although a couple of the stories are utterly brilliant – more about the standouts in a moment), but there is undoubtedly a readership for it.

Little Dystopias alternates between short stories and commentary on the creation of the stories. This is an odd choice for Aisteach to make. Personally, I love reading about the process by which other authors create their work, so I was fascinated by these passages, but I’m not convinced that the general public cares; some people may find this interstitial material interesting, but others may find it intrusive, preferring to get to the stories without the explanations. (I suspect that the more well known you are, the more fans you have who will be interested in your process; Aisteach will likely agree that he isn’t there yet.)

Worse, the explanations are actually published before the stories; rather than coming to the story with no knowledge, you will get a sense of the plot (which has a tendency to undermine the wonder of discovery that is such an integral part of reading fiction). Forewarned is forearmed: read the stories and then, if you are interested, go back and read the preceding exposition.

The interpolated material isn’t always well thought out. Aisteach’s advice that as a writer you need to learn the rules so you know what you’re doing when you break them is good, if a little shopworn. However, I don’t think the examples of breaking the rules that follow it (a story told entirely in dialogue or as a poem) are all that radical literary experiments (I’ve been doing both for years, and others surely did before me).

I found it distinctly odd that Aisteach didn’t make this argument before the one truly exceptional story in the collection: “The Folklorist’s Notebook.” A horror story about an encounter with a dangerous story, each page is laid out like a page in an actual notebook: slightly grey and lined from top to bottom. To aid in the illusion of entries in a notebook, the text is written in a font that mimics handwriting. This story was a brilliant example of form following function, something truly innovative that was worth the cost of the anthology on its own. The fact that, as he describes in the introduction to the story, Aisteach garnered a lot of rejections because he insisted upon telling “The Folklorist’s Notebook” in this innovative way says a lot about his integrity as a writer.

In another interstitial piece, Aisteach claimed that, despite being a gay man, he doesn’t write gay content, but that can’t be right. For one thing, there is a literal depiction of gay sex in the story “A Fairy Tale:” the inciting incident in the fairy tale is the Princess coming across the man she has been betrothed to against her will having sex with the stable boy. (This, was the other standout tale in the collection for me, a humourous romp that plays with the tropes of classic fairy tales in interesting ways.) It could also be argued that gay experience is metaphorically explored in some of Aisteach’s stories. Hannah, the Irish immigrant given a chance to survive the sinking of the Titanic thanks to a time travel experiment in “The Survivor’s Menagerie,” for example, feels invisible when she gets to New York; this could be a reflection of the way some gay men feel when they have to pass for straight in a predominantly heterosexual society.

Aisteach can, of course, characterize his writing in whatever way he wants, but, given the variety of characters and their relationships in his writing, it seems a shame that he would feel the need to deny this aspect of it.

I found much of the interstitial material in Little Dystopias debatable, but I will limit myself to one more point: Aisteach argued that one must risk offending readers with stories about a future with a different morality. I absolutely agree that an author must follow her muse, regardless of the effect the resulting writing will have on potential readers. Where I would disagree with Aisteach is the idea that science fiction is about the future; in fact, it is always about the present. For example, “Nobody Watches,” the story he is introducing, is very much about our current obsession with fame (albeit, taken to an absurd degree).

I enjoy engaging with the ideas of other authors, so, even though I disagreed with much in Little Dystopias (which, by the way, is a misleading title; there is very little Orwellian or Huxleyian dystopia to be found in the volume), it did give me a lot of food for thought. And some of the short stories in the book were memorable. You could do a lot worse for a single author short story collection.