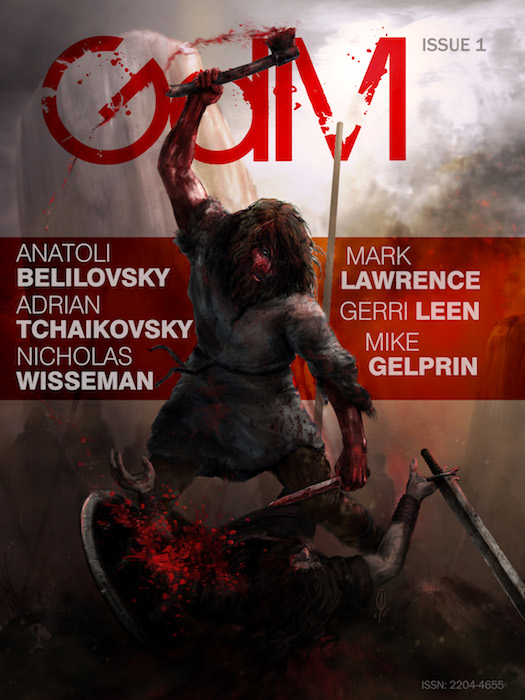 I confess I only had a general idea of what the term “grimdark” meant before reading the first edition of Grimdark Magazine, which enshrines its precepts in the form of short stories, author interviews and reviews. This first foray also conveniently provides definitions, in an essay by Layla Cummins and in the words of one of the high priests of the genre, Joe Abercrombie.

In her essay, Grimdark is Here to Stay, Cummins writes that fans define grimdark as simply “fantasy with heavy doses of reality thrown in”. In other words, the moral compass of the characters does not just point north and the characters are as complex as any normal human being, written in such a way as to make them plausible and easier to identify with, albeit with lashings of gore thrown in (though not invariably, I should point out).

Abercrombie puts it even better when he says, “If we’re talking dark, gritty, cynical, unpredictable fantasy, often with a big streak of dark humour in the mix, I guess that’s the way I chose to write because I’d read a lot of commercial fantasy growing up that seemed to be the exact opposite of those things: light, fluffy, predictable, serious verging on the pompous, and I felt the need for a different approach to the material.”

However, the stories in this first volume don’t easily fit these definitions. Which is maybe the point. Two of the tales, The Neutral by Mike Gelprin and The Woman I Used to Be by Gerri Lean, are certainly grim. But I’d argue they are science fiction. And the other stories are fantasy. They all have in common realistic characters and grey areas. No clear heroes and villains, that’s for sure.

Lean’s The Woman I Used to Be is easily my favourite story. In it, a shuttle pilot who appears to have crashed her ship and killed hundreds in the process is struggling to remember who she is. In what appears to be her recovery period she doesn’t recognise even her own family. But the tale has a twist, and a good one, too, very much in the spirit of the deeply disturbing TV series, Black Mirror.

The first story in the magazine is Shadow Hunter by Adrian Tchaikovsky; it introduces us to a character from his Shadows of The Apt books. Set in a world in which warring tribes adopt the iconography and characteristics of insects, it has an almost Western feel and introduced me as a newbie to what seems like a fascinating world. The story takes a while to get started, though, with too much back story loaded at the front end – I would have preferred if the author had just launched into the main tale and let the other elements unfold or take care of themselves. Once it does start moving, though, it’s a great read.

The Red Wraith by Nicholas Wisseman is flash fiction that feels like a brief introduction to an extremely dark character, but has a nice chilly ending.

I really enjoyed The Neutral by Gelprin (translated by Anatoly Belilovsky) – right up until the ending, that is. Featuring a hostage negotiator in a world that seems to parallel our own, the end is a broken sentence, a device I didn’t much like as it seemed like one of those cop outs that inexperienced creative writers might be inclined to use (it isn’t actually “he woke up and realised it had all been a dream,” but you take my point). The story is tight, well written and punchy, but a more considered ending might have worked better.

The interview with Graham McNeill is for initiates only. Reading it, I felt like a poor, uneducated farmer in the middle ages attending Latin mass – it’s full of abbreviations and references that were completely meaningless to me. When I looked them up, it turns out Graham is the author of several of the game-related Warhammer books, among other series, and works for Games Workshop. As a gamer myself, I am aware of Warhammer, but the article only made any kind of sense once I’d done an internet search on “40K”, “WHFB” and “30K”, not to mention the Black Library. Perhaps it’s just the ex-journalist in me, having had it drilled into my brain that in any article you write the title out in full first and put the abbreviation in parenthesis afterwards. Carp aside, now that I know what is being talked about, I’m intrigued to learn more about the Black Library and Graham’s work.

Rounding off Grimdark #1 is a terrific coming-of-age tale called Bad Seed (a story set in Mark Lawrence’s Broken Empire world), featuring farmer/warrior Alann Oak. Alann, who viciously attacks another boy, Darrin, befriends him a year after the attack and though the incident is not forgotten the pair form a strong alliance. We are taken swiftly into Alann’s adulthood, his conversion to religion, his life as a husband and father. But when two sword-bearing soldiers enter his land, Alann shows them what a farmer, armed only with a hoe, is made of. I feel there were echoes of the movie Braveheart in what happens next and in the way the tale unfolds, but Lawrence makes the premise his own.

In this week’s viewing: Magia Record says you shouldn’t trust the radio, Hanako-kun and Welcome to Demon School extend that to the radio club, and more!

A profile of SF Film and visual arts in Ecuador.

Judging More Books by Their Covers: The Silver Warriors