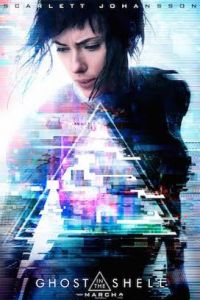 I should probably start by admitting that I have not seen the original anime version of Ghost in the Shell, nor have I read the manga on which it was based, so I have to take the English-language remake on its own merits. (It helps, I hope, that I was all over cyberpunk back in the day, of which the original Ghost in the Shell was an exemplar.) So, how did I feel about the new movie?

I enjoyed it, thank you for asking.

Ghost in the Shell is the story of Mira/Major: her brain was removed from her body which, she is told early in the film, was destroyed in a terrorist attack, and placed in an android body. She is the first of her kind, she is also told, a cybernetic organism created to fight for justice; in the course of a case (an investigation into the murders of some of the scientists who created her), she uncovers a lot of a past that has been hidden from her.

This is a lovely film to look at. The vision of a futuristic Asian city, with its six storey holograms projected between buildings contrasted with street level grunge punctuated by neon signs is visually compelling (if somewhat familiar from Blade Runner and its progeny). Character designs, especially of the various android creatures, are interesting, and the film has some recurring images (such as a flaming archway), that are stunning.

The action sequences in the film are entertaining enough, told with some style (such as the main character, barely visible, punching out a suspect in shallow water). Director Rupert Sanders does not rise to the virtuosity of John Woo, but neither does he sink to the incoherent depths of Michael Bay, so on balance, he does a good job.

And I’d like to give a big shout out to Takeshi Kitano (aka: “Beat” Takeshi). Sure, he is underused in Ghost in the Shell. Still, it’s always great to see him onscreen; his world-weariness adds to the intended (if not quite achieved) gravitas of the film.

Decades of reading and watching science fiction have conditioned me to question the technical underpinnings of films like Ghost in the Shell, and I must admit that there was one plot point that bothered me. Mira/Major has few memories of her life before she became a cyborg, and the memories she does half-have are fakes, implants intended to cover up her true origins and give her an emotional reason to fight terrorists. This would make sense if her brain was digital: giving her false memories would be as simple as saving files in a folder marked “MEMORY.” But the film insists her brain is analogue, which means it cannot be edited that way. True: Mira/Major is taking a drug which suppresses her memories, which explains part of the problem, but not all of it. 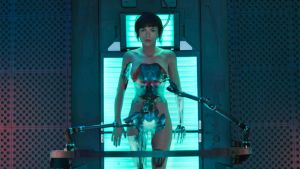 Then, there is the issue of whitewashing.

All of the characters in the anime and manga versions of Ghost in the Shell are Asian, but some of the key actors in the live action film are not. Some people see this as fundamentally racist.

I think there is merit in this argument, but, given the logic of filmmaking in Hollywood, I don’t think it could have been otherwise. No American studio would put tens of millions of dollars into a film that did not have an American star; although international box office is a large part of Hollywood’s income stream, their domestic audience always comes first. And while there are certainly Asian-American actors who could have played Mira/Major, none of them are as large a box office draw as Scarlett Johansson. It’s a crass calculation, but its racism was ultimately an unintended consequence, not the main motivation for the move.

If anything, this feels like a missed opportunity. One of the film’s strengths is the way it brings up (however briefly) issues of how memory conditions identity: at one point, Mira/Major says that identity is about action, not memory, but the story strongly suggests otherwise. Ghost in the Shell may feel like watered-down Philip K. Dick, but at least it does pose the question. When, towards the end of the film, Mira/Major learns that she was Asian in her pre-cyborg life, finding herself in a pink shell could have kick-started an exploration of the connection between colour and identity. Unfortunately, this movie was not that ambitious.

At this juncture, cyberpunk seems like a spent cultural force. Partially, this is because most of the original voices of the movement have moved on to other genres/artistic concerns. To a large extent, this is because the future seems to have arrived, with many of the tropes of cyberpunk now playing out in our daily newspapers; this can make the literature of the future seem nostalgic.

But that doesn’t mean there is no more fun to be had from it, and Ghost in the Shell does deliver that.