In this week’s viewing: The final lineup for this season, and it’s looking outstanding! 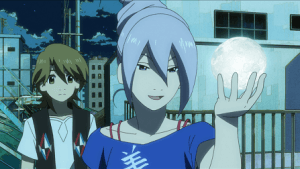 The Eccentric Family 2 #2-3 – The magician Temmaya was a friend of the people who ate Yasaburō’s father, until he fell out of favor with Benten and/or her colleague Jurōjin. He’s also stolen something that belongs to the Nidaime. And to complicate things further, Benten’s back and doesn’t seem to be getting along with the Nidaime either. The old bit of tanuki wisdom about not getting involved in the affairs of tengu is sounding very wise about now; although none of them is strictly a tengu, three humans with serious magical powers having an argument looks bad enough for the supernatural society of Kyoto. Unfortunately, Yasaburō is already too entangled to extricate himself.

There’s a much bigger magical component in the story than its predecessor, and the way it’s presented gives the whole setting a numinous feeling. Temmaya being trapped in a painting of the underworld until a master artist added the Buddha to it, or the moon being plucked from the sky, without the incantations or formulae common in fantasy anime, come across as, well, just magical.

Everything about this show is still top-notch. Kyoto feels like a living, complicated city, practically a character itself among the complicated individuals populating it, from Temmaya to Yasaburō’s grandmother the venerated sage. This is going to be a real treat. 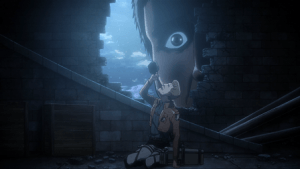 Attack on Titan #27-29 – Attack on Titan is wasting no time this time around. A further clue to the walls’ construction is revealed, along with a hope for repairing the breach — except it turns out there is no breach. There is a village, destroyed but with no signs of the inhabitants being eaten, with one immobile Titan stranded in it. Given how busy everyone is, it’s forgivable that no one starts to put the pieces together until some of them have a breather at the castle.

And then there’s the supply cache at the castle which appears to have been left by agents of a more advanced civilization operating in the area recently. And those agents have long since infiltrated the Survey Corps.

Ymir brings up an interesting point in the process of distracting Conny: if his parents could become Titans, does that mean he also has the latent ability to become one? Is this actually common among the people inside the walls? Or is it one of the ape-like Titan’s powers that it can transform ordinary humans?

There’s a whole lot to think about here, and the show isn’t sparing the action sequences either. It has managed to improve on the first series in nearly every way. 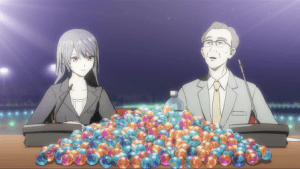 KADO: The Right Answer #2-3 – Shindō’s negotiating skills are helping smooth the way, but Yaha-Kui zaShunina is no fool either. After buttering up his Japanese audience by telling them he was attracted to their country by the generosity of spirit he found there, and getting an advance commitment that of course they would share a resource, then he hands them enough magic baubles to power the world. Now they can’t, for instance, take the time to verify that the wam are completely safe to use without looking like hypocrites.

I sure hope someone on the government’s negotiating team is a science fiction fan, because when the alien is eager to hand over a limitless power source for everyone to use, there is always a catch. The power from the wam can’t be infinite unless the laws of thermodynamics are somehow repealed in higher-dimensional space.

It’s a test, at the very least. zaShunina says to Shindō that the right answer is to keep thinking, so humanity should keep asking itself about issues like where the power comes from. Maybe they could also ask about why the plane could be absorbed by Kado in a matter of moments, but it will take a month to process everyone back out.

This is aiming to be excellent cerebral sf, just the kind of thing we hardly get from Hollywood these days. 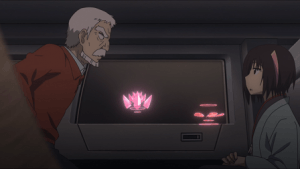 Alice & Zoroku #2-4 – How’s this domestic comedy doing? In the last few episodes, we’ve learned that Sana was a semi-feral child and possibly an alien being before that, Sanae has lost both her parents, and Minnie C. uses her power to conjure the arms of her dead husband. Not exactly the light and fluffy sitcom that this show was teased as.

On the other hand, Zōroku is still the ultimate grumpy dude. Even teleported without warning into the middle of Sana’s kidnapping, he’s ready to face down a sociopathic ex-marine and lecture her on the errors of her ways. And then to tell Sana to quit getting all hung up over possibly being a creature beyond human comprehension and just come home with him. In his curmudgeonly way, he’s the antidote to any amount of darkness and angst.

It works. It really, really works. I don’t mind some occasional terrible CGI if it can keep this balancing act going. 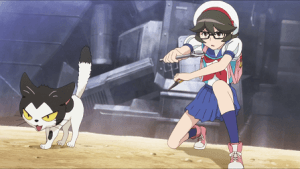 Atom: The Beginning #2 – While Umatarō and Hiroshi are off trying to justify the existence of their project, A106 takes another figurative leap forward by saving Ran and the tomcat from someone else’s highly advanced autonomous robot. The denouement to the fight feels rather forced; it’s a bit hard on the suspension of disbelief to accept that everyone would preemptively ignore any observations Ran might have, even if they had already jumped to the conclusion that Six must have caused the damage.

That moment aside, the show is staying pretty sharp. It’s got an interesting take on the construction of AI, too. Not the spell-out-every-scenario-vs-real-learning debate, which is an old one, but rather the idea that the robot’s education should primarily come from emotional experiences. 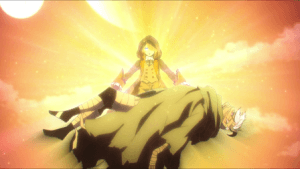 Rage of Bahamut Virgin Soul #2-3 – Yes, Nina is a dragon, and very well aware of it, a nice change from the standard protagonist with powers they themselves barely understand. Azazel thinks she’s a demon, so apparently few people know that there’s an entire village of dragons in human form out there somewhere.

Much of these two episodes are spent filling out the cast. There’s the undead doctor; her assistant who looks like a distant relative of Thing, only with the decency to put some clothes on; an additional order of guardsmen in evil black armor just to make sure you know they’re bad news; a new guy with superhuman strength to match Nina’s, and, apparently, very handsome hands; and a better look at Azazel’s sidekick, who has angelic powers and just might be a Chosen One posing a threat to the megalomaniacal king.

The other big thing in these episodes is the wretched condition of the demon slaves, and Azazel’s fruitless efforts to wake people up to the horror of it. Nina chickens out, saying she doesn’t really understand what’s happening well enough; the captain of the guard seems willfully blind, even surrounded by evidence that some of the upper classes are into much worse than just chattel slavery.

The production values are still amazing, and Nina, despite her political timidity, is an engaging heroine at the center of a likeable ensemble. 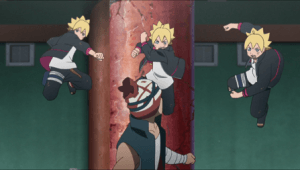 Boruto: Naruto Next Generations #2 – Naruto started with a kid entering ninja school too, so Boruto is working hard to assure viewers that it won’t be a complete retread of its predecessor. Last episode, it emphasized the march of technology and the changes it was bringing to the ninja village and neighboring city. This time, it expounds on how much ninja training has changed in a generation.

Iwabee, one of Boruto’s classmates, wants to be the strongest ninja of all, like any good shōnen series character. But being strongest isn’t enough anymore; Iwabee has failed his graduation tests twice because he won’t pay any attention to book learning. Because this is still a shōnen series, this naturally leads to a high-powered fight in the school gym followed by male bonding.

Art and animation are still stuck at “passable”. Don’t expect anything great from this show, but it does what it wants to do well enough. 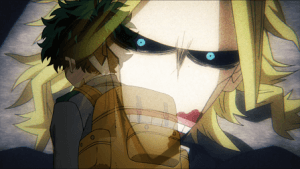 My Hero Academia #15 – One more recap before the credits, and then it’s time to move on. Well, but then some things need to be reiterated by more people, and then Izuku needs to have some quick flashbacks to people saying things that put pressure on him. This is where you start to suspect that the plot is going to be stretched a bit thin this season.

Eventually it’s time for the school sports festival to start, and the MC is an “R-rated” superheroine in bondage gear. The author seems to have realized the potential problem with this in a high school setting, so he has the characters briefly debate it, so he can remind you that the distinguishing trait of one of them is that he’s a pervert. Actually, a sadist is a good representative of this competition, because the people who designed it were apparently some sick bastards. Surprise event #1 is an “obstacle course” race, where the main obstacles are other students, as everyone is given free rein to fight each other in order to win.

The first season of My Hero Academia was chock full of shōnen cliches, but executed beautifully. This season, it feels like it’s falling victim to common shōnen series pitfalls, chief among them being slow pacing (at the end of this episode, the race is still on lap 1 of 4). It’s not terrible, but in a season like this, doing the tropes well is not nearly enough.

And with that, it’s finally time to pick five shows to follow for the rest of the season. Atom: The Beginning is disqualified because I’d like to stick to shows that are available to most potential readers of this column, and as far as I can tell, it isn’t available in some major English-speaking countries. (Kado‘s territories, which were still TBA at the time of its premiere, were finalized at worldwide excepting Asia, so it’s fine.)

As I keep saying, Boruto and My Hero Academia are okay, but they are definitely on a lower tier than the rest of the shows in this list, so I’ll be cutting them. That leaves Kado, Attack on Titan, The Eccentric Family 2, Rage of Bahamut, and Alice & Zoroku, and one heck of a season ahead.

For hundreds of years, premature burial has captivated readers and viewers of fiction. Why are we so fascinated with this horrific event?

Playing the Short Game: How to Sell Your Short Fiction (Part 29)