A lot happened between Skull Mountain and the Empire State Building. Will Murray fills the void with this colossal confrontation between two iconic characters in King Kong vs Tarzan.

As the widely-publicized monster reboot Kong: Skull Island impresses audiences in theaters, the true spirit of the giant creature created by Merian C. Cooper and Edgar Wallace should be remembered more by the original Radio Pictures 1933 production of the movie King Kong. Sure, this latest version set in the 70’s allows viewers to enjoy the cinematic specter of a more modern age using today’s advanced movie making technology, but nothing compares to the original monster, set during the depression, a time and place when society looked forward to the spectacular wonders of the world as a diversion from the pains of struggle that held dark clouds over the globe.

Since that first production, the giant beast has made countless appearances for the pleasure of fandom. Regardless of the media format, film, animation or print, the most prolific King Kong incarnation simply belongs in his most palpable setting, the earlier years of the 20th century. Everything else just seems a bit cartoonish.

The same can be said about Edgar Rice Burroughs’ classic Tarzan who first appeared a little earlier, but in the same general era. Such a character, whose strength is heightened through his control of the jungle environment, would be less effective in a more modern or more civilized environment.

Combining a classic character from film with a noted literary legend is a perfect match. It’s been done before. But this time around, it’s difficult to imagine them separated. 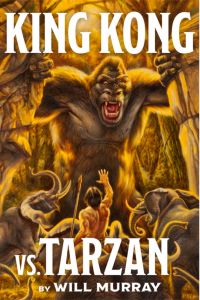 As the title indicates, the novel King Kong vs. Tarzan, by Will Murray from Altus Press, brings together the two unique characters. Murray doesn’t try to re-write the story to suit a specific audience. The author doesn’t try to put the characters in a setting that weakens their fundamental existence. Here, readers experience the core of these colossal creature’s existences in a world where the human condition is set aside for the raw empowerment of the horror that lurks in the jungle and the beasts that rule them.

The novel is primarily about the untold story of King Kong’s journey to America. As the aged cargo freighter Wanderer makes its slow journey towards the Atlantic, the precious cargo inside must be sedated as well as nourished. But when Kong’s health takes a turn for the worse, even the conniving filmmaker Carl Denham cannot avoid making a stop for provisions. But when a revived Kong escapes the ship’s hold and disappears into the jungle, only one man, or ape-man, is capable of stopping the beast from ravaging the natural elements of Africa.

When we first see Kong in his Skull Mountain habitat, there is no doubt of his awesome power.

“Ponderously, inexorably, with an almost majestic groaning, the gates were pushed apart.

Sailors scrambled for safety as feet larger than motorboats descended upon the milling mass of natives, squeezing them of their vital juices as if they were nothing more than grapes caught in a cruel winepress.

Moonlight framed the mountainous beast who stood holding the gates apart, half crouched, his inhumanly intelligent eyes sweeping the dark native hut before him.”

Just as fitting, readers get to see the basic understanding of a man raised in the jungle when we see Tarzan in action (any fan of Johnny Weissmuller in the lead role will appreciate this).

“The ape-man, when told of their needs, simply nodded and plunged into the water, leaping off of one of his untethered elephants who had wandered back to the riverbank.

He swam upstream a fair distance, and was not gone long.

When Tarzan returned, the bronzed giant was dragging a full-grown crocodile by its tail. The saurian left a billowing trail of red in the muddy river waters. It was dead, and the hunting knife clutched in the ape-man’s sun-bronzed hand dripped crimson.”

Pitting these two iconic characters together is a perfect recipe for adventure. The two don’t face off until just past page 350. In a vision depicted by artist/illustrator Joe Devito on the book’s cover with the expected ferocity and tension of a colossal confrontation, author Murray matches the imagery with a fitting introduction of the two powers.

“Tarzan raised one commanding arm and proclaimed in the Mangani tongue, “Hold! I am Tarzan of the Apes, protector of this jungle. Who are you to despoil it with impunity?”

Though we know the storied fate of the giant after he arrives in America and eventually climbs the Empire State Building, writer Will Murray has filled in an important and action packed void with King Kong vs Tarzan. Hopefully this will open the door for many more “The Wild Adventures of” books from Altus Press. Edgar Rice Burroughs, Merian C. Cooper and Edgar Wallace would be happy to see how their famous monarchs have evolved – or not evolved.

Gideon Smith, Aloysius Bent, Rowena Fanshaw, Bell of the Airways and Maria the Mechanical Girl are back, and boy have they got their hands full!

Does Puppygate Affect the Best Artist Hugos? Observations by a Hugo Loser.

What to Do When Your Planet is Trying to Kill You