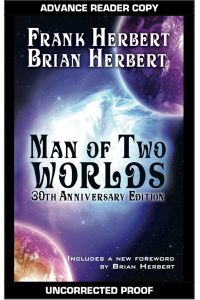 Written by Brian Herbert, in collaboration with his gifted father Frank Herbert, this tale first started with a germ of an idea way back in 1983, and was published in 2015. Set in the future, the novel opens with an alien Dreen by the name of Rhyll who, bored with his life and wanting to be a storyteller and create worlds, steals a spaceship and crashes into a Human vessel. The majority of Humans, it appears, are unaware of the Dreens – who, through their thought processes, created Earth and Humanity. Patricia, his self-aware ship, self-destructs, leaving a badly injured Rhyll to deliberately merge with a dying Human named Lutt Hanson Jnr. It is here that our Dreen-Human adventure, in which two conflicting entities inhabit the same body, begins.

Lutt, it turns out, is the son of a leading newspaper magnate, Rhyll the offspring of the Dreen Chief Storyteller – a bigwig on his own world. So here we have the children of powerful entities trying to stop a conflict between their home worlds. This leads to an interesting tale but, as always, no spoilers here.

The tongue-in-cheek humour, particularly where Rhyll transforms the carcass of a rat into a McDonald’s ice cream, made me chuckle at times, although I’m not quite sure what McD’s will think of it. I very much enjoyed the backdrop of Earth nations warring in space, yet many will point out that this is a well-worn plot thread, and quite rightly so. In MHO, however, it works particularly well in this tale of international and interplanetary politics, crime organisations and family feuds – with a bordello thrown into the mix.

A fan of all things Herbert I found, to my surprise, that this novel played cat and mouse with my interest. One moment I was hooked yet the next it struggled to hold my attention. Why, however, I’m unsure. Since the writing of this book the author has further developed the Dune saga, in collaboration with the wonderful Kevin J. Anderson, all novels of which have hit the New York Times Best Seller list.

To me Man of Two Worlds is a marmite book, readers will either love it or hate it.

Introducing fresh voices and works in science fiction for and by the people who care most about the genre, the website Shoreline of Infinity shows why “talent should be rewarded.”

What do you when a human explorer of another galaxy becomes a Messiah to his colleagues? Recreate him in a lab to fight himself. What could possibly go wrong?

Deep in the Heart of Texas, Part 2