In this week’s viewing: Fewer season finales than expected, though ACCA bows out. 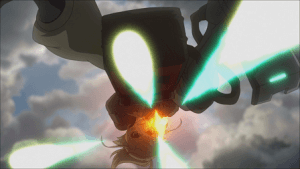 Saga of Tanya the Evil #11 – It’s Anson Sioux’s moment, and Tanya’s battalion is suddenly fighting an enemy which can do real damage to it for the first time. The result is a beautifully rendered dogfight through the clouds of the North Sea. Sioux is even willing to make it a suicide attack — but Tanya survives again, somehow, and her troops (at least the major characters) are all going to pull through. Which seems to render the whole thing kind of pointless. Why would Being X build Sioux up only to keep protecting Tanya? She doesn’t seem to have been pushed any further toward gaining faith. It’s like Being X has given up and is just messing with her.

And then two weeks later the war is over, the Germans are having a triumphal march through alternate fantasy Paris, and there are armistice terms. Tanya’s mages get to take a holiday in the south of France, and throw in an odd moment of fanservice. The audience for a show like this is assumed to be mostly male, so if anyone was going to be put in a swimsuit and have a shot centered on their behind, you’d expect it to be Viktoriya. Maybe this show has turned out to be unexpectedly popular with women.

And then Tanya realizes the war isn’t over. The army and navy of the Republic have retreated to Brest (a major port at the tip of the northwestern tentacle of France), where they’re planning to make off with all the supplies they can and regroup somewhere more hospitable, like Britain or one of their African colonies. Once again, Tanya the Evil is playing off of history that nearly happened — there was, during WWII, a plan that never came to fruition for the French army and navy to get as much of themselves as possible to Algeria if France itself had to be abandoned.

The war is a long, long way from over. I hope this means this show will be around for another season. 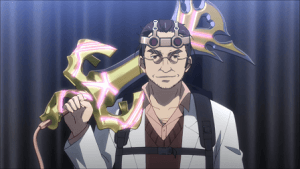 CHAOS;CHILD #11 – Yes indeed, there was another psychic involved, sending the delusions into Takuru’s mind, but it’s none of the teenagers awakened by the Shibuya event. Instead, it’s Dr. Sakuma himself, wielding an artificial psychic weapon powered by a Ghostbusters backpack. (I’m all for shout-outs to one’s favorite works, but boy was that a distracting moment in a tense scene that could have done without distraction.)

Before the reveal, Takuru has to fight Onoe, who reveals that she killed his parents right after he conjured her, leaving him questioning what the wish that awoke his power really was. Except that Onoe is a delusion, so was it Sakuma making her say that? Or was the delusion just a general suggestion on Sakuma’s part, leaving Takuru to fill in what his creation would have said?

Onoe is dead, either way, but maybe not permanently. Since Takuru created her, it seems like he should be able to resurrect her. He could probably conjure up a replica of Yui as well, come to think of it. This may be headed for a slightly creepy happy ending. 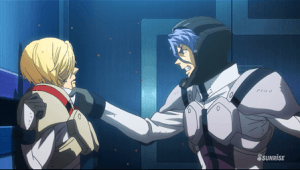 Mobile Suit Gundam: Iron-Blooded Orphans #49 – For his final grand gesture, Fareed sends away all his remaining henchmen and attempts to prove that one man can achieve anything. Alas, the greatest battlesuit ever and an infinite reserve of hubris are not quite enough. He dies cornered by his former best friend, trying to convince Gaelio that he was something more than a power-hungry asshole who used his friends as his first tools and wouldn’t have been any improvement over the current regime.

So it is time for the last stand. Everyone who can pilot a mobile suit is there to buy time for the rest. As is Yukinojo, for no apparent reason other than the scriptwriter is planning to kill him off too. Right now it looks unlikely for anyone other than Mikazuki to survive the fight, unless unexpected events intervene. But they might — I have a suspicion Julieta is working her way toward a last-minute change of sides. 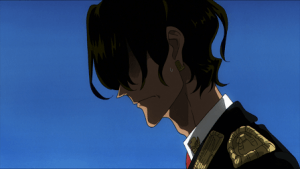 ACCA: 13-Territory Inspection Dept. finale – The moment of the coup arrives, and, surprise! It’s all been a big practical joke on Furawau! Though it does also give ACCA a chance to scare Schwan straight about trying to shut it down. Furawau takes its oil and goes home, but Dōwā regards it as a rogue province that will rejoin the country in the fullness of time, and probably blocks its membership application to the UN and forces other major powers into a polite fiction of a One-Dōwā Policy. The Five Chiefs disband, because the one thing an entrenched bureaucracy acting solely in its own interest needs is less oversight. The eldest princess suddenly gives up her vendetta (or, more likely, has run out of assassins due to that policy about suicide after one failure).

I’m sorry, I don’t believe a word of it. I can’t believe that coup plans could be disseminated to such a large number of people and not leak to the general public. I especially can’t believe that the Furawau people wouldn’t have been tipped off by their friends stationed in other provinces. That the entire elite bureaucracy could confuse their job security with the welfare of a general public it never interacts with…okay, I can believe that, but good grief, what a dismal note to end on.

ACCA had the best premiere this season, but all the stylish art in the world cannot make up for the tons of idiot plotting and the lionization of corruption and oligarchy.

They’re here! Or They’re Back! Steve asks the movie review question: “WHY?”

New AI Classifies the Chance of Life on Other Worlds – ExtremeTech