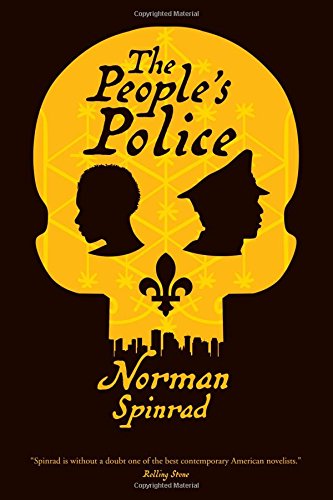 I’ve been a Spinrad fan since the 70s. The author is, in fact, one of my favorite re-reads, be it Bug Jack Barron, The Iron Dream, The Solarians, The Void Captain’s Tale, The Men in the Jungle, Carcinoma Angels, A World Between.*…

I’ve even strongly advocated for him as a SFWA Grandmaster pick over the past couple of years and still believe that he is as deserving as any other contemporary SF author for that honor.

Back in the 70s, Spinrad was a big hit on the SF scene.  His works edged over into the “New Wave” realm, focusing on human relationships in some very strange settings in a way that was subversive, unsettling and raw.  (So much so that one of his books was banned in the UK….)

How to classify and understand an author who can tackle the Holocaust, cannibalism, cancer, and one who can chart out an entirely new form of democracy, and do so with language that is both purply and immediate?

Spinrad is a conundrum and his writing chimeric: Spinrad not only treats with ideas that are on the edge, he also adopts a unique writing style for each story, one that is both complimentary to the emotional impact he wishes to impart, but one that is also its own character, capable of breaking the fourth wall, if one sits back from the work a bit and examines it.

All of this and more is fully on display in Spinrad’s latest offering The People’s Police.

I’ll mince no words: you must read The People’s Police. It will surely be worthy of consideration for 2017’s top awards.

Before I discuss the story itself, I think it fitting that I mention this: Isaac Asimov once observed that Spinrad  “constantly displays the courage to be different.” I also strongly urge you to read Iron and Chromium: Five Novels by Norman Spinrad from the Los Angeles Times book review. Alvaro Zinos-Amaro does a far better job of explaining Spinrad than I ever could.

Politics is a common theme of many of Spinrad’s works: in A World Between, we’re introduced to a fully realized electronic democracy; in Bug Jack Barron, we’re treated to both political malfeasance and a stunningly accurate take on the fourth estate in the electronic era. In The Iron Dream we receive a treatise on the art of propaganda.

The People’s Police continues the author’s examination of this subject in what some might refer to as a post-semi-apocalyptic world. It is, in fact, a world not too far in our future and most likely not too far off from where reality will find us.

It is also a novel that seems to combine many elements from Spinrad’s earlier works (and probably some of his later offerings that I have sadly missed, a mistake that I am quickly rectifying); but this is not a case of retread. Instead, it is a grand weaving together of the issues and concerns individually addressed in previous works, now complimenting each other in one grand epic.

What struck me most was how absolutely RAW this novel is. Spinrad pulls no punches; it’s almost as if he has gotten tired of innuendo and allusion. This time, there’s no mistaking the message, no chance to misunderstand.  You WILL be exposed to the nitty-gritty underbelly and you will not be allowed to look away.

The People’s Police takes place in a drowning New Orleans and the lawless, neglected slums that have grown up around it, owing to both the ravages of Katrina and an economic down-turn referenced as the “great-deflation”.

We’re introduced to two main characters – Martin Luther Martin, a gang member thug who through guile and street smarts manages to find his way out of the swamp and onto the New Orleans Police Department (‘Luke’ sees the world through a gang filter: the cops are the meanest, strongest gang: a not too subtle take on today’s society…); and MaryLou Boudreau, otherwise known as Mama Legba, the Voodoo Queen with a prime time television show. We also meet J.B. Laffite, an occasional narrator and owner of several bars and bordellos, and the Johnson family: Luella Johnson is Luke’s love interest, her family is police gentry, into which Luke marries on his rise through Big Easy society.

New Orleans has been left to rot, a victim of “hurricane season” and the great deflation, which finds the NOPD serving eviction notices on its own personnel. The powers that be are making a land grab (if it reminds you of the banks and their sub-prime loan scams, you’d not be far off the mark) and Luke, Lafitte and Mama Legba find themselves in the unique position of being at the right place and the right time to maybe change things, but first, they’re going to have to make a deal with multiple devils, Erzuli, a voodoo spirit, among them.

Spinrad weaves the ancient and often misunderstood voodoo religion into the happenings and, although this takes the novel into serious spiritual if not paranormal territory, the manner in which he treats these spirits manages to keep one foot firmly planted in the science fiction realm.

The way in which the circumstances and characters come together to solve their various problems is too convoluted and revealed in such a fantastical manner that no quotes will do it justice**. Each scene unfolds seamlessly from the next (making this a very fast and compelling read). About the only thing I can say that will do it justice is: thank god Norman Spinrad did not go into politics!

You will want to find out how a bordello owner, a former gang-banger, a television voodoo evangelist, the voodoo pantheon and the city of New Orleans are saved. You Will.

One other passing thought on a theme I find particularly interesting that seems to kind of float over the novel as a whole: Spinrad seems to be offering us an indictment of commercialization:

What the Bourbon Street Casino Hotel in Vegas did to the Mardi Gras trade, however, was a boot in the butt recent enough to be personal. Every one living off the Quarter tourist trade could see it coming the moment they announced they were going to build a replica of Bourbon Street inside a mallworld-casino with iron-lace balconies overlooking the nightly parades featuring the current headliners playing in the phony Preservation Hall. Replicas of New Orleans restaurants serving up fast- oody replicas of famous Cajun and Creole dishes.

All as family-friendly as a Disney World and no Alligator Swamp surrounding it.

How was the real thing supposed to compete with that?

When it comes to raw, on-the-edge science fiction, Norman Spinrad’s The People’s Police is the real thing!

*Most, if not all of which are now available again through ReAnimus Press

** That statement notwithstanding, we are also publishing an excerpt from the novel here today. You can read it here.