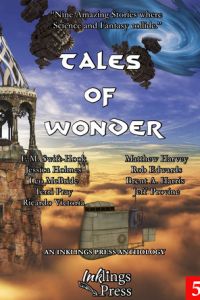 So last year the good folks at Inklings Press were kind enough to send me a copy of Tales From Alternate Earths to review. Well they must have liked me because they sent me a copy of their next anthology: Tales of Wonder. Although not my usual cup of tea, I agreed to review the anthology because it allows me to talk about a genre I haven’t said much about before: science fantasy.

I find science fantasy to be an interesting concept. On the one hand it can be a term used to disparage any science fiction work that doesn’t use hard science (Star Wars is a good example), but on the other hand its a sub-genre with roots in the golden age of science fiction. In general, science fantasy stories often mesh elements from both science fiction and fantasy. A good example for alternate historians like myself would be steampunk, which often ignores how steam power actually works so the author can showcase technology like automatons, computers and various flying machines alongside ancient magic and eldritch monsters.

Tales of Wonder, however, focuses on more than just steampunk. Below are a few of the stories that stood out (for better or worse) to me:

“Changeling Child” by E.M. Swift-Hook: A young girl named Tani and her father are forced to leave their home as bad Lowlanders are coming for them. Tani, however, becomes separated from her father and soon finds herself near Castell Blighe where she hears the disembodied voice of a  faie…except this fairy tale creature is made out of switches and wires.

The old fairy stories are not something I am that familiar with, but elements of them (like not eating the food they offer to you) are familiar to me. I thought this story did a good job using those old tales in a world that appears to be a technological civilization that suffered some great catastrophe. Now the thinking machines of old have become the supernatural creatures that go bump in the night, making this a fun story for genre fans who remember the old tales.

“Kaana” by Ricardo Victoria: Kaana lives in what appears to be a dyson sphere that also houses the last life forms in the galaxy, ever since creatures made of pure entropy have overrun the universe. Her job is to coax life from the ground of her biodome using magic terraforming, or “worldforming”. When a group of marauders, however, threaten to destroy her home, she has to seek out a spirit in the forest to save them all.

I enjoyed the world-building in this story. Kaana herself is a post-human species, but many of the other villagers are from alien races, although some resemble Terran animals, so its possible they could have been evolved eons ago by humans. Meanwhile, the “spirit” reminds me a lot of Voltron, but that may be because I have just been watching Voltron: The Legendary Defender recently. Power Rangers is also another franchise that came to mind when I finished this story. Granted this story does have some issues involving unclear character motivations and sudden perspective shifts, but otherwise it’s worth a read.

“Sedna’s Hair” by Jeff Provine: A spaceship crewed by Inuit and captained by a robot are about to use a nearby black hole’s gravitational pull to slingshot them toward their destination. When Irniq, however, is talked out of jettisoning a comb from an airlock as an offering to an old Inuit god, disaster strikes. Facing the wrath of a mythology suddenly made real, Irniq and his companions will need to think fast or face the eternal abyss.

This is perhaps the best story in the anthology and really showcases Provine’s strengths as a writer. To be honest, I do not know much about Inuit culture or religion so I have no idea how much the author got right, but I like the idea of companies crewing their starships with people who are used to thriving in harsh environments. It certainly beats the standard “Euro-American Adventure Model 27” we see in so many other stories. Check it out if you want a different perspective on space travel.

“A Twist in Time” by Brent A. Harris: A young 19th century London boy named Oliver pickpockets a strange watch from an enigmatic gentlemen. When he is wrongly accused of committing another theft, he is chased by a crowd and runs into the same gentlemen who shows him how to use the clock to escape. Oliver soon finds himself in a forest where Lords live on top of towers and rule over the dyed slaves below. Oliver will have to keep his wits about him if ever hopes to escape this world and return home.

This story was a fun mash-up of time travel and fiction’s most famous orphan. Admittedly I felt like I needed a refresher on my 19th century English literature to get all of the references, but if you enjoy stories that take public domain characters on weird adventures, then you can’t go wrong with this one.

“A Very Improper Adventure” by Matthew Harvey: Lillian Bierce, daughter of Lady Madeleine Bierce, witnesses a murder that inevitably opens up secrets about her mother’s past as a spy. Hunted by an old enemy, Lillian and her mother try to flee on an Ether cruiser, but are cornered by their pursuer, starting a confrontation that goes from polite to deadly after only a few courses of dinner.

This could have been a solid steampunk adventure story, if it wasn’t for the first act which involves Lillian describing the aforementioned murder and her actions during it to her disapproving mother. I’m not exactly sure why the author just didn’t show these events happening through Lillian’s eyes and then cut to Lillian finishing her retelling to her mother. It would have made the entire first third of the story much less of a drag. Nevertheless, if you can get past the beginning, you still might enjoy this espionage tale set in an alternate British Empire.

“The Last Sorcerer” by Leo McBride: Eli and Maggie have fled London for the English countryside. The government is hunting for anyone with magical talent, since magic can interfere with their technological society, and Eli may be the last sorcerer left alive and Maggie is only his apprentice. Just when they think they have found a place to lay low, they are spotted and now have to flee to a circle of stones to carry out Eli’s last spell.

This story reminded me of what a dark future of the Harry Potter universe could look like. In both stories its established that magic can cause advanced tech to stop working and, when you have a sufficiently advanced society, I could see how magic could become harder to hide when one spell can act as a giant EMP. Thus we get to see a fun little dystopic fantasy with an ending that opens up a lot of possibilities if McBride ever wants to revisit this world again.

Well that is all I have to say on Tales of Wonder. On the whole it was a solid anthology and I certainly wouldn’t call any of the stories contained within “bad”. If you like science fantasy as a genre, then I can recommend this anthology. Pick up a copy and watch as the impossible becomes probable.