Home Uncategorized Is It Time For The Fugghead Awards?

The first week of 2017 has seemingly already confirmed that puppy antics (and puppy-related antics) are not going to go away any time soon.

The evidence takes the form of a new anthology (title and details not forthcoming from this source) that can probably best be described as puppy-wank, complete with an introduction by one of the “Alt-right’s” more colorful characters (incidentally firming up the connection between the puppy and “Alt-right” movements) and

a complaint from one of the more vocal author members of the canine tribe about possible black lists at publishing houses.

If you are inclined to keep lists, the TOC of the aforementioned anthology is a good place to start.

I vaguely remember the first time I heard the fannish word “Fugghead” used.  It was at a north eastern convention (probably a Balticon or a Lunacon) and was used in reference to behavior that made it quite obvious what it meant.  Having witnessed other questionable behaviors that did not draw this particular epithet, it was also obvious at the time that this particular word was only used under extreme circumstances.

This is confirmed by the word’s entry at Fanac.org in the Dr. Gafia’s Fannish Terms glossary:

Fugghead (n.) is one of the microcosm’s least polite ways of calling someone an absolute idiot, usually with strong implications of behavior so far beyond the pale with respect to fandom that even the most liberal of fans would be inclined to raise an eyebrow over it. Claude Degler, for example, while he had a number of cockamamie notions, was considered a fuggheads because he stole from the very fans who hosted him when he traveled around the country; George Wetzel was generally disliked for his bigotry but was considered a fugghead because he wrote poison pen letters to the employers of fans he disliked. Coined by Francis T. Laney, this was an in-print bowdlerization and euphemism for use in fanzines back in the days when the Post Office felt that part of their duty was to read, rather than just deliver, the mail and you weren’t supposed to use certain four-letter words; in wire correspondence (which predated tape as a recording medium), where it was presumed the post awful would not go to the trouble of listening, Laney pronounced the term with the appropriate four-letter word in place of “fugg.”
(8/13/2005)

Fuggheaded (adj.) is used not just to describe someone who’s really stupid and invariably acts without thinking, but someone whose behavior in fandom is too far out for acceptance even to the most open and accepting as fans. Laney used to give out Certificates and everything.

(I added the emphasis.)

That last definition for usage as an adjective is a telling one considering our current circumstances: Fans are accused – by puppys – of being hypocritical because they are not welcoming of puppydom’s more egregious behavior.  This is like being asked to lick the boot that kicks you.

The other interesting thing about that last quoted paragraph is that Francis T Laney (a well-known member of First Fandom) used to issue Certificates of Fuggheadedness.

Now of course we all know how much the Puppys enjoy awards – how eager and focused they have been for nearly five years running, trying to convince us all how relevant, important and deserving they are;  they’ve attacked the Hugo Awards in an effort to destroy an award they have little chance of being nominated for (without stuffing the ballot box) and managed to push the new Dragon Awards in their direction during its inaugural year, and so I was thinking –

Why not join them?

Why not give them what they’ve been clamoring for, an award that only they can win! 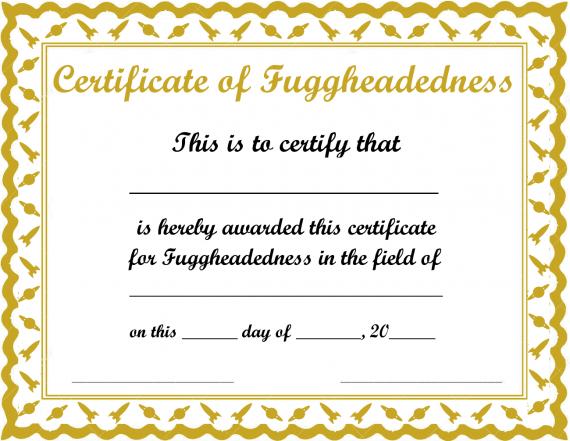 I’m kinda sure that there’s no limit….

Book Review: The Doors of Sleep by Tim Pratt