Apollo 17 Astronaut Eugene Cernan (1934-2017) and the American flag he raised, became the last of their kind to stand on the Moon. 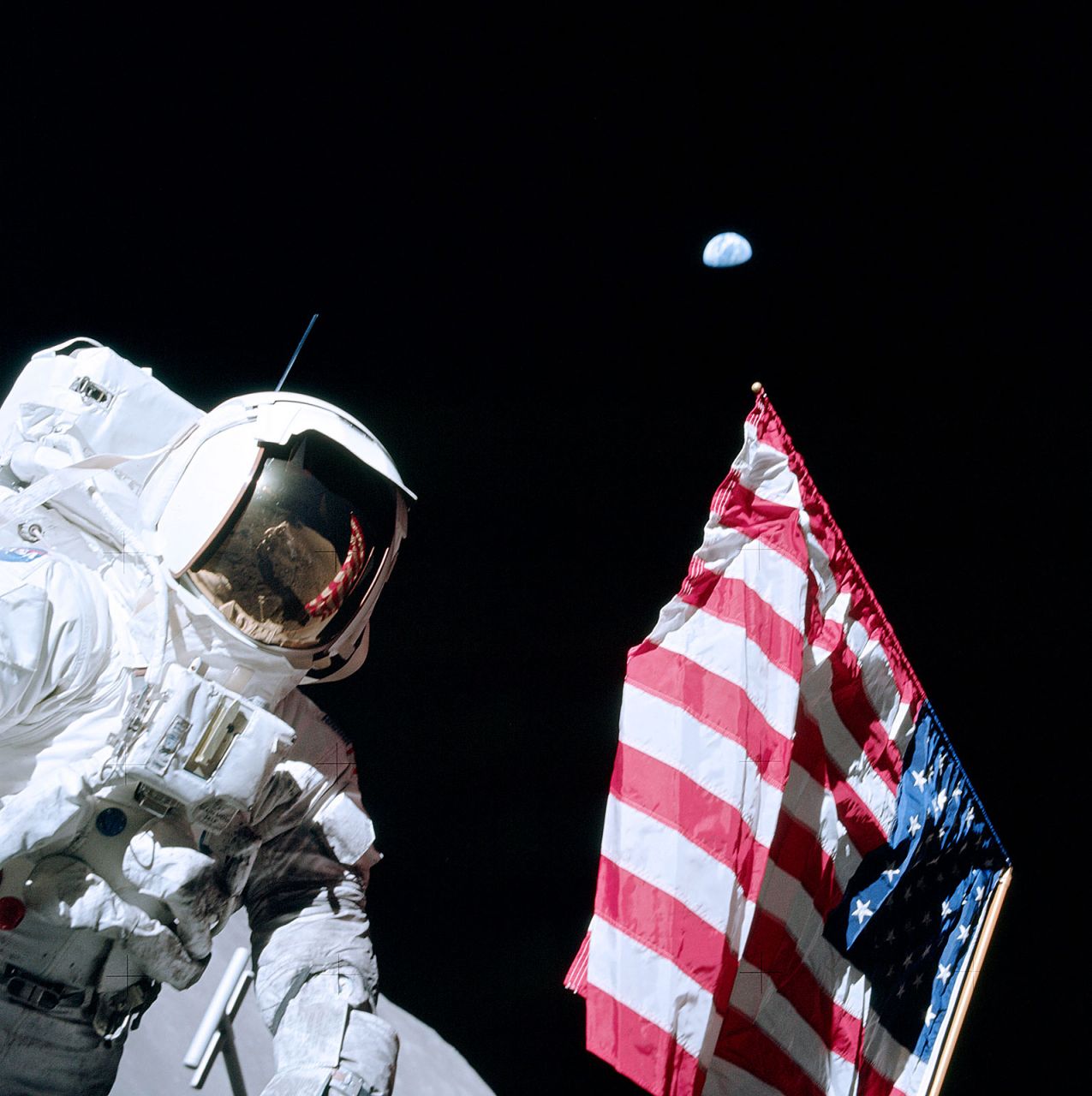 On December 14, 1972, Navy Captain Eugene Cernan climbed up the ladder of the Apollo 17 Lunar Module, worked his way back into the cabin and sealed the hatch, and became the last human being to walk on the surface of the Moon. Forty-five years have passed since then; on January 16th, 2017 Gene Cernan died, but his “record” is in no danger of being broken.

Before Cernan and his fellow moonwalker Harrison Schmitt finished their final moonwalk, as a salute to the Apollo Program and a reminder to others of where we came from and how far we could go, Cernan positioned his camera so that Schmitt and the American Flag were framed in the black sky with the flag pointing to the distant blue Earth. Cernan’s own reflection can be seen in the visor of Schmitt’s helmet.

The American flag raised by the crew of Apollo 17 was unlike the five that proceeded it. It was slightly larger, six feet wide rather than five, and it enjoyed a unique heritage – it had been to the Moon before. The crew of Apollo 11 carried it to the Moon and back in 1969 so that it could be mounted in Houston’s Mission Control Center in recognition of the support team’s role in making the Moon landings possible. It hung there until this final flight to the Moon.

The crew of Apollo 17 returned it to stand on the lunar surface in commemoration of the entirety of the Apollo Program (and now of Cernan’s own remarkable life). Like Cernan himself, that American flag became the last of its kind to stand on the Moon. I believe Gene Cernan’s tribute to the people of Earth, to the nation who championed this adventure, and to the NASA team who got us there, is one of the most evocative and inspirational space photographs ever taken.

Eugene Cernan’s book Last Man on the Moon recounting his time on the space program is a must read. Unlike other “right stuff” memoirs, this one is a candid and gossipy insider’s account of what it was like to be a NASA astronaut during the Apollo days. We will miss him terribly.

MOVIE REVIEWS: THE AUTOPSY OF JANE DOE and THE GIRL WITH ALL THE GIFTS

Today we begin a new bi-weekly feature that introduces the art and history of the members of the International Association of Astronomical Artists (IAAA), a group of artists who have as their collective forte the illustration and presentation of scientifically accurate depictions of space, the planets and the hardware that we will use to get […]

An autographed giveaway in honor of Brian Aldiss’ 90th birthday