Only two items this week:

First:  I’m pleased to announce that we have begun the process of formatting the ebook version of our Special Edition issue.  This edition will include all of the contents published for issue 611 on the website, which includes: 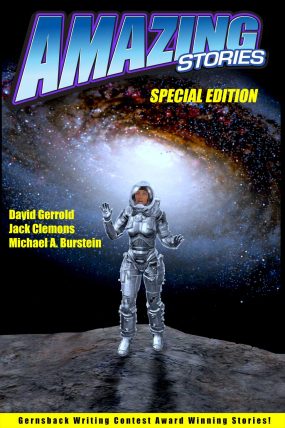 Editorial by Ira Nayman
“[T]his is a great little volume to leave lying in the bathroom.”
– Charles de Lint, Fantasy and Science Fiction MagazineI don’t know about you, but I cannot read most novels in one sitting. This means that I have to repeatedly cross the threshold from the real world to the imaginary world over a course of days or sometimes weeks, suspending my belief each time.

Fiction
Tool Dresser’s Law by Jack Clemons
Wildcatter dropped onto Hawking a month ahead of perihelion. We slammed in after losing a brutal tug of war with the singularity that started when we closed to 60 klicks. I was in the cockpit running a spectrometry survey through the assayer ay-eye during our final approach. I’ve flown a lot of A.U.’s with McRae; he’s a damn fine pilot. I looked up from the display when I heard him curse.

Bob the Hipster Knight by Jeremy Lichtman
Never trust an app in the form of a woman you don’t know, even if you are a hipster knight. A Gernsback Contest winning short story.

How Gaia and the Guardian Saved the World by Alex Shvartsman
The Guardian has to protect Earth from imminent destruction by incoming meteor; the biggest obstacle to it completing its mission may be its own programming. A Gernsback Contest winning short story.

Parental Guidance Recommended by Vince Liberato
Mars needs a drink. Her parents try to stop her. An old story is given a futuristic twist. A Gernsback Contest winning short story.

The Sounding Cataract by Stephen S. Power
Ernie is convinced that a plume of fire holds the answers that it has been sent to Pluto to seek, but Mission Control believes that the plume is too dangerous to get near. What is a poor land rover to do? A Gernsback Contest winning short story.

The Mesmerist by Karen Skovmand
For some, the best way to deal with the apocalypse is to retreat into memory. For some of them, there is a man who can help… A Gernsback Contest winning short story.

Awake the Snorting Citizens by Trent Walters
Trapped in a damaged tin can floating in space, Roberto has to resort to desperate measures to survive, A Gernsback Contest winning short story.

A Clean Start by James by Gordon Harper
Under the best of circumstances, making art is hard. Making art on the moon with your window of opportunity quickly closing up? That takes a special kind of inspiration… A Gernsback Contest winning short story.

The Size of the Fight by Matt Downer
A space veterinarian gets more than she bargained for when she moves – not voluntarily – to a small asteroid mining community. A Gernsback Contest winning short story.

Lost Phoenixes by Stuart Barton
Survivors of a doomed Earth approach the moon, not certain if the people who fled there decades earlier will view them as friends or enemies. A Gernsback Contest winning short story.

Penny of Tharsis Montes by Sean Monaghan
A potentially deadly asteroid fall causes a Martian farmer to remember the days he spent on the red planet…and, perhaps, the days to come. A Gernsback Contest winning short story.

We’re all Here in the Future by Kermit Woodall
People are brought to consciousness in the future. Were they in a coma? Were they frozen and revived? And why does their cognition appear to be impaired…

The Great Milo by David Gerrold
Never piss off a man who buys ink by the barrel.

Nonfiction
A Brief History of Worldcons From NYCon to Discon, 1939-1962
The early years of fandom, and especially Worldcons, were wild and wonderful, featuring outsized personalities and innovations that are now standard features.

What Does it Mean to be Amazing?
Some thoughts on the meaning of the name of the first science fiction magazine.

E-formatting will be conducted my Joseph Zitt (my very first fannish friend), so I have great confidence that it will look fantastic!.

Two Notes:  first, the ebook version will also include the full page illustrations that accompany each story.  Second, all of our subscribers who signed on at Loncon3 and Detcon1 will be receiving a free copy of this edition (part of their subscription benefits):  please check the email address you registered with to insure that it is current.

Second item:  I will be attending and moderating a panel at this year’s Boskone, but will be unable to attend the rest of the weekend owing to home duties.  Please stop by and look me up (Steve).