The not-quite-a-zombie novel Children of the Different will be for you if world level catastrophes are your cup of tea. 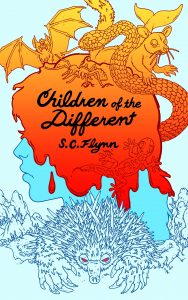 The world has been hit with a massive germ warfare accident.  The madness killed millions.  Those it did not kill went through a Change. The lucky ones, in a manner of speaking, survived the change and developed additional abilities. Those not quite so lucky, woke from the Change as feral creatures with one thought only – to eat human flesh.

Set in Australia, the not-quite-a-zombie novel Children of the Different by S.C. Flynn tracks the lives of Narrah and Arika, twins who enter the Change almost simultaneously. Their home is in the Settlement, a farming community that has shunned all technology, the true curse of the world in their eyes. They discover there is another evil out to destroy what is left of their world: The Anteater. A malicious creature who can exist both in the Changeland, that strange place children go to as they enter the Change, and in the real world devastated by the effects of the madness, he plans to rule the world, and rebuild it in his own image, by controlling the reexamining population of Ferals: zombie-like creatures who seek and devour the remaining humans.  But first he needs to assure no one can create a cure to the Madness.

One remaining lone research station still has the base germ culture that created the madness.  With the help of Narrah, who, after his Change, can read the hard drives of computers simply by touching them, and with the help of adult scientists who survived the madness, Arikah and her brother travel to Perth to meet with people who can possibly find a cure. Spurred on by the discovery that the Change had side effects that will eventually kill all children who survive the Change and do not become Feral, they find the cache of germ cultures and begin their trials of curing and rebuilding the world.

A little slow in spots, this novel is an interesting look toward the world -wide plague theory many novels have addressed these days. The Australian setting provides an interesting counterpoint to a North American world view, much like Nevil Shute’s On The Beach. However it spends a bit too much time popping back and forth from character to character and not quite enough on the world around them to make it truly interesting. If world level catastrophes are your cup of tea, give it a read.

Guest Post by Foz Meadows: Unempathic Bipeds of Failure: The Relationship Between Stories and Politics

A profile of the multi-pseudonym-ed French author, Serge Lehman

Introducing fresh voices and works in science fiction for and by the people who care most about the genre, the website Shoreline of Infinity shows why “talent should be rewarded.”