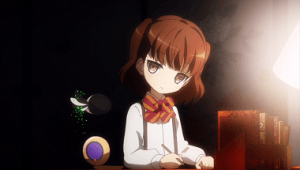 Magical Girl Raising Project #11 – Oh, look, an elementary school student with only a vague understanding of right and wrong has been made gamemaster. This couldn’t possibly turn out badly, could it?

Tama gets her one moment of glory and her backstory dump, and then dies almost immediately, because if there’s one thing Swim Swim is good at, it’s internalizing rules. Cranberry’s backstory only shows the moment she first teamed up with Fav, and she doesn’t revert to a mundane form after her death, suggesting that she never was human to begin with.

Swim Swim is a throwback of sorts to an older magical girl tradition. Early magical girls often didn’t use their powers for fighting, and their alter egos were commonly older than them. However, they did also have the strong sense of justice which Koyuki aspires to and which Swim Swim is completely lacking.

Ripple gets to have the first traditional magical girl transformation sequence in this show, but the buildup to it gives it a very different feel than usual. It’s like a warrior putting on their armor rather than a girl calling up her sparkly magic.

With only three competitors left, it feels like there’s room for the plot to breathe. It’s the first chance we’ve had to see the survivors really reflect on recent events and the loss of their mentors. It makes for one of the best episodes yet, and it’s another sign that this would have been an even better show if it could have had six months rather than three. 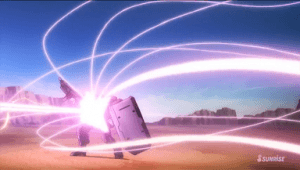 The Mobile Armor is powered by an artificial intelligence programmed to kill all humans. (Did someone build this deliberately or what?) It and its helper robots can repair each other and it can keep building more helpers. It can lay waste to entire areas with one zap.

The Gundams have exactly two things going for them: (1) their armor can stop its beam weapon, although they can’t shield anyone from it, and (2) the Mobile Armor is subject to the laws of conservation of mass and energy, where the Gundam reactors basically run on magic. So they’re fine, but everyone else is screwed.

To add insult to injury, Iok decides he wasn’t a big enough idiot last time, and is able to come back for another futile gesture of honor that screws up the plan to stop the armor and gets a bunch of people killed. And he’s still alive to commit more idiocy in the future.

If Tekkadan and the various factions of Gjallarhorn all manage to pull in the same direction for a bit, Mars has a chance of surviving this. But what then? Suppose Mikazuki is the one who comes out of this qualifying for an Order of the Seven Stars? He doesn’t like having authority over one person; what if he outranks most of Gjallarhorn? 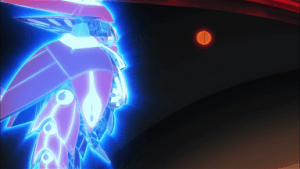 BBK/BRNK #23 – So it turns out the child of prophecy is actually the fortysomething mother of two. BBK/BRNK has had its slip-ups in trying to bring in more than the standard cast of Japanese schoolkid heroes, but good one there.

Azuma and Reoko are able to fuse Ōbu and Entei and operate without any support from limb bubuki because, I dunno, it looks cool, and they overcome Guy and Duroc. Guy gets a final speech about how Azuma is going to lose his bubuki-controlling powers because of stuff the writer just thought of, and then it turns out that Migiwa has been Entei for a while because now she can move back and forth in time.

And then… things end all of a sudden. Maybe. I’m not sure if that “To Be Continued” means another episode is coming, or another season sometime down the road. In case there’s more next week, I’ll delay my final thoughts on this show until then. 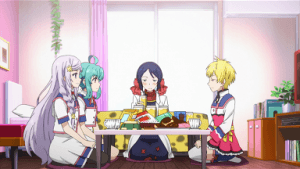 Cheating Craft #10 – The next exam is actually a test of fashion, moderated by an okama, because why the heck not? (An okama, at least as far as anime is concerned, is a nonbinary person who is biologically male but presents in some ways as female, and often has a stereotypically female occupation. Okamas are sometimes depicted as being attracted to men, which leads Westerners to think of them as an equivalent to the stereotype of the effeminate gay man, but the concepts are substantially different.)

Kōi’s terrible performance in this test leads Anri to arrange an all-girls party to try to remedy Kōi’s fashion sense. This goes badly because Kōi is impervious to persuasion, the teacher turns out to be an unpleasant drunk, Mary is useless, and Haku thinks Kōi is just fine the way she is. Very, very fine. No wonder Mumei hasn’t been able to get anywhere with her. 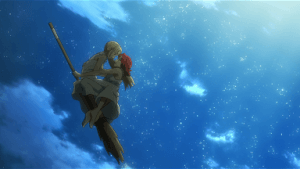 Izetta: The Last Witch #11 – Confronted with the possibility that Izetta is going to burn up the rest of her life expectancy fighting Sophie, she and Finé realize they have strong feelings for each other above and beyond camaraderie or friendship. It makes a nice parallel to the story of Sophie and the archduke who loved her.

Now for the not-so-nice part. Yes, Germania has basically constructed an atomic bomb. More than that, Berkman reveals they’ve actually tested it in secret. How??

The United States was able to hold nuclear bomb tests in secret because it has vast unpopulated spaces to hold them in. Alternate Germany has no such empty areas. Even in the most rural corners of it, word will spread of an unusually destructive explosion, or of a massive evacuation if they tried to clear a space for a test. Plus, if there are still any operational universities around, someone is likely to notice extra radiation or odd seismic activity.