There’s nothing more refreshing than discovering a good book. But finding a work of literature that is unlike anything you’ve ever read before, in a good way, is the defining moment from a reviewer’s perspective. 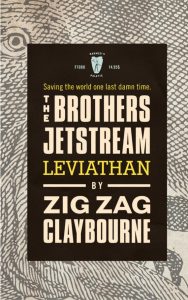 One example of this type of book came in the form of The Brothers Jetstream: Leviathan by Zig Zag Claybourne. The author’s compassion for literature is evident in his clever storytelling. It is his unique characters and his ability to present such a complex tale in a quick, flashy language with a no-nonsense, shoot-from-the-hip kind of way that makes this book stand apart from others.

Literally cutting right to the chase, the book’s two heroes are in pursuit of the False Prophet Bufford, a dark entity of pure evil with just enough charm to unsettle the reader. But the Jetstream brothers, Milo and Ramses, are more than just the world’s answer for all the horrible monsters out there. Clad in their archetypal black hooded trench coats, an image that they want others to perceive, they are anything but archetypal good guys. Leaning heavily on their own supernatural powers and quick wit, they are the driving force behind this global adventure. It is a fast-paced journey with a vast cast of other inimitable characters who enter and leave the story at blinding speeds, leaving a maze of questions that will, inspire, astonish, and on occasion maybe even leave the reader a bit confused.

Yes, this is a character-driven story. But different from traditional tomes where character development is gradually provided over time so the reader can concurrently experience its pains and growth, this narrative relies on quick snippets of cast members. Mix this torrid pace with the author’s personal style of bending the English language until it is on the verge of snapping, and you have a story that is poetic during the calm, and rabidly complex when it picks up speed.

This book isn’t for everybody. Reading The Brothers Jetstream: Leviathan is kinda like sorting through a tabletop of puzzle pieces where a few of the key parts are still left laying upside down. By design, the author gives the reader a mosaic of images, where each new fantastic character turns over yet another clue leading to the overall picture.

We do learn quickly that there is a sordid history between Milo and Ramses and their nemesis Bufford, but these clues come in tiny morsels. And if you look closely, you may even find other hidden gems. Take the narrator’s recollection of the False Prophet having taught Milo how to play checkers, who in turn taught his brother Ramses how to play. I mention this instance because it is through this brief reference of the game of checkers that readers get a hint of the pair’s lifestyle. And in a sense, we find a better understanding of how this story rolls as well. Both the game and this story bring excitement and intrigue by “featuring jumps, triple jumps, and double back jumps.” This describes The Brothers Jetstream: Leviathan in a nutshell. You are never left siting still, and no matter how you think you’ve got things figured out, the next move will leave you shaking your head.

In casual conversation via email contact with the author prior to completing this review, it became quite evident that Zig Zag Claybourne is as passionate about his work as he is about the overall representation of PoC and indie writers in the speculative fiction community. Right or wrong, this is not an element that is commonly cited simply because many publications often focus more on the body of work than the on the body behind the pen. But since it was mentioned, this is unquestionably a key element to finding fresh new voices in a genre primarily built around the infinity of ideas, and these are the kinds of books we can never get enough of.

Zig Zag Claybourne has created a new type of story with a new type of language and cavalcade of new ideas. If you can keep up with the pace, The Brothers Jetstream: Leviathan is a fun read. Give it a try, because hopefully this will be the first of many more.