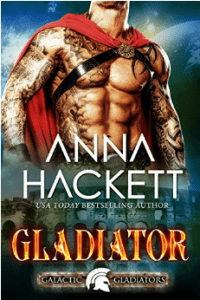 Time to talk about a few of the many new releases in science fiction romance in the past month.

Anna Hackett is off and running with a new series about Galactic Gladiators, which should be another hit for her. The first book was entitled Gladiator and yours truly read it in one sitting. The next book in the series is due out this week and I’m looking forward to reading it. I especially enjoyed the tough, kickass heroine, who could definitely hold her own in the arena, even against tricksy aliens.

The plot of Gladiator: When Earth space marine Harper Adams finds herself abducted by alien slavers off a space station, her life turns into a battle for survival. Dumped into an arena on a desert planet on the outer rim, she finds herself face to face with a big, tattooed alien gladiator…the champion of the Kor Magna Arena.

A former prince abandoned to the arena as a teen, Raiden Tiago has long ago earned his freedom. Now he rules the arena, but he doesn’t fight for the glory, but instead for his own dark purpose: revenge against the Thraxian aliens who destroyed his planet. Then, his existence is rocked by one small, fierce female fighter from an unknown planet called Earth.

Harper is determined to find a way home, but when she spots her best friend in the arena – a slave of the evil Thraxian aliens – she’ll do anything to save her friend…even join forces with the tough alpha male who sets her body on fire. But as Harper and Raiden step foot onto the blood-soaked sands of the arena, Harper worries that Raiden has his own dangerous agenda… 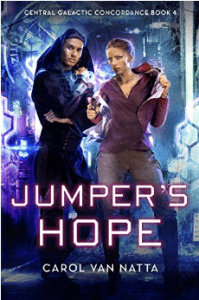 Jumper’s Hope by Carol Van Natta is on my To Be Read (TBR) list. I enjoyed the earlier entries in her Galactic Concordance series, and this one looks to be just as adventure-filled. Carol does excellent world building.

The plot: Reunited lovers must outwit a ruthless government agent, or their rumored deaths will be real this time. Two retired elite special forces veterans discover their battles aren’t behind them after all. Someone considers them loose ends, and will stop at nothing to erase their knowledge of a secret government project. Their service left them both with wounds that will never heal. Do they still have what it takes to survive?

Kerzanna Nevarr’s elite special forces days of wearing Jumper mech suits and piloting Citizen Protection Services’ ships are long gone. The dark legacy of her service forced her to learn to live a quiet life. And she had to do so alone, without the lover who died before her eyes.

Jess Orowitz, veteran of CPS’s secret spy organization, Kameleon Corps, made the mistake of trusting his superiors. He’s paid a horrific price – fractured memories, constant headaches, and the death of the only woman he ever loved. Retirement on a quiet farming planet has kept him in an emotional deep freeze, but safe.

But now, Kerzanna is being hunted for reasons she can’t guess, and even more stunning, the man who helps her escape is Jess, her supposedly dead lover. For Jess, discovering Kerzanna is still alive is only the first of the lies and betrayals he uncovers.

Worst of all, their hunter is someone with CPS intel and lethal resources. Someone who believes the only obstacles standing in the way of success are one broken-down ex-Jumper and a fractured Kameleon.

Together, are they strong enough to escape death one more time? 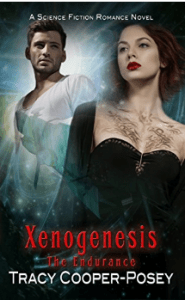 Tracey Cooper-Posey released Xenogenesis, the next book in her Endurance series. These novels are set aboard a “generation ship,” which still has a thousand years to go to reach its destination (so, plenty of stories left for Tracey to share with us, which is good!). The plot: Life aboard the Endurance is disintegrating – unemployment, inflation, crime and destitution are all ignored by the super-rich, including Rex Julyan, the wildly successful and most hedonistic man on the ship. When Rex meets an old Artificial Intelligence called Emma, she tells him there may be a way to save the ship, but does he care enough to try? For the woman he once loved, Belen Tirrell, is now the partner of the ship’s Captain, Antonio Tyler. She left Rex to be with him, long ago. Nothing would win her back now…would it?

I hope you’re not tired of my raving about Lindsay Buroker’s Fallen Empire series, which is science fiction with romantic elements. Because she released book seven, 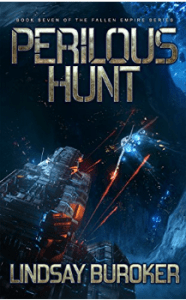 Perilous Hunt, and it was as good as its predecessors. This series and set of characters has definite Firefly vibes. The story: After failing to catch up with her daughter Jelena so many times, Alisa’s optimism is battered, but her determination has never waned. She, Leonidas, and their eclectic crew are hunting down a Starseer research station in the heart of the Kir Asteroid belt – Jelena’s supposed location. Alisa vows that she will find her daughter if she has to search a million asteroids to do so.

But Jelena and her close friend, Prince Thorian, have attracted the interest of many factions, and the Star Nomad isn’t the only ship on the hunt… 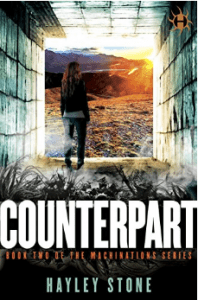 Hayley Stone released Counterpart, the second book in her Machinations series (another science fiction novel with romantic elements). I loved the first book, which reminded me of the Terminator world inagoodway….if John Connor was a woman and there was cloning happening. No time travel, it’s not Terminator, but since I’m a huge fan of this general genre, I was excited to have someone else put their spin on the trope of a robot apocalypse and life afterward. Counterpart is on my TBR. (I have to write my own books or else I would just sit and read all day!)

The story: The machines believed their extermination of the human race would be over as quickly as it began. They were wrong. As the war against extinction intensifies, people are beginning to gain the upper hand.

Commander Rhona Long understands survival better than most. Killed in combat, she was brought back to life using her DNA, and she’s forged a new, even more powerful identity. Now the leader of the resistance, she’s determined to ensure the machines are shut down for good.

But victory is elusive. The machines have a new technology designed to overcome humanity’s most advanced weaponry. Despite Rhona’s peacekeeping efforts, former nations are feuding over resources as old power struggles resurface. Worse, someone inside the resistance is sabotaging the human cause—someone who, from all appearances, seems to be Rhona…or her exact replica. 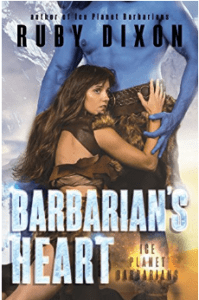 I’ll finish up with something a little lighter – Barbarian’s Heart by Ruby Dixon, the latest entry in her Ice Planet Barbarians series. The story: I’ve never spent a day without my mate since arriving on the ice planet. I’m happy and in love, and we have a beautiful child together. All that changed when the world shook.

He wakes up from his coma…and he can’t remember me. Or our son. Every memory of the past two years is gone. And that changes everything between us. How can I love someone that doesn’t remember me?

How can I not, when I know he’s still my mate underneath it all?

Your turn – what new science fiction romance have you been reading?