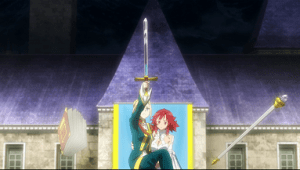 Izetta: The Last Witch #5 – Seems reasonable for the kaiser to be surprised that Eylstadt is so open about Izetta, because in this sort of show hardly anyone shows off their alleged superweapon unless it’s some incompetent minor power that only exists to be crushed by the bad guys to show how terrifying they are.

It’s refreshing to see that for once the good guys feel no need to engage in a pointless coverup. They invite in the international press, and say, yup, we have a real live witch, here she is, don’t mess with us. And very clever of them to follow that right up with a completely fake miracle.

This was really an excellent episode all around, which makes it deeply disappointing to see that the announcement of the next episode is telegraphing that it’s going to be pointless filler. 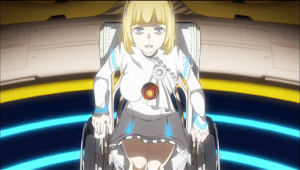 BBK/BRNK #17 – Kaoruko has wised up after seeing Maxim and his comrades dead and is becoming less annoying by the minute as she tries to defend Azuma. Epizo has long since figured out that Azuma is a reasonable guy, but fights him because he’s developed a bit of crush on Leticia along the way, and Leticia wants to get hold of Entei.

Leticia’s hope to walk on her own is not quite your typical ableist writing. If there’s one thing BBK/BRNK has been consistent about, it’s that trying to do things completely by yourself is a really bad idea. It’s how Reoko was merged with Entei, and it’s why Zampaza didn’t stand a chance against Ōbu with only one conscious crew member. I don’t put it past the writer to come up with some other way for Leticia to be magically regenerated, though.

Even if all the bubuki users eventually defect to Azuma’s side, there’s that worrying mention that Zampaza can now be directly operated without a crew bonded to its components. But Azuma’s side has an ace in the hole that he doesn’t even know about: Guy’s assistant is definitely Zetsubi Hazama, Reoko’s comrade, undercover again. 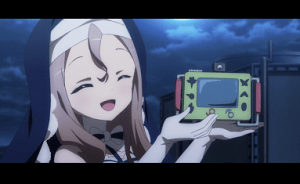 Magical Girl Raising Project #5 – Wow, a genuine lesbian couple! I’d be more excited about this excursion into diversity if I didn’t suspect that they’re heading for the popular anime trope where any not strictly heteronormative relationship has to end with a tragic death. (The same goes for allowing Sōta to be a magical girl.) Sister Nana is getting the same kind of in-depth character development that preceded the first two deaths.

We also get a closer look at Magicaloid 44. She’s basically Astro Boy as a magical girl, only with no morals and an obsession with money, and her power is an extended lampoon of every cheap kids’ science fiction show where magical devices appear for one episode and are never spoken of again. That was fun.

There seem to be three factions shaping up among the girls. One is the girls who want to find some way to retain their ethics and fight back against Fav, such as Koyuki and Nana. Another is Swim Swim and her team, who are playing to win. But then there’s a third, including Cranberry, Calamity Mary, and Magicaloid, which doesn’t seem to care much one way or another as long as they can grief someone along the way. They may be the most dangerous of all. 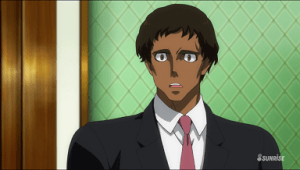 Mobile Suit Gundam: Iron-Blooded Orphans #30 – It never rains but it pours for Tekkadan. Right on top of all the complications happening on Mars, its Earth branch has been largely cut off by someone trying to start a war.

Gjallarhorn, it was explained a while back, originated as a peacekeeping force to mediate disputes between the major powers, but became corrupted over time. Now that the events of the series have revealed how bad the rot was, Arbrau has decided it needs its own force to guard its interests. Gjallarhorn doesn’t like that one bit, plus parts of it are smarting from being defeated by Tekkadan, so it can kill two birds with one stone by getting Tekkadan to fight Arbrau.

Orga has rightly sensed that something is wrong, but things look set to get a lot worse before the cavalry can arrive. Once again, the lesson of Iron-Blooded Orphans is that no adult should ever be trusted. (Except for Yukinojo the mechanic.) 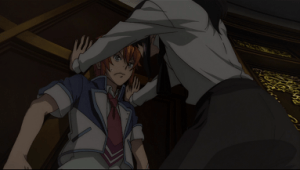 Cheating Craft #4 – Mumei’s class gets the proctor who takes them to 30,000 feet and then starts exposing them to the jet stream while trying to answer test questions. Just another day at an elite school.

A much bigger thing on Mumei’s mind is getting a pen just like Haku’s to demonstrate his love for her. This leads to a weird encounter with the proprietor of a hidden pen shop who is either infatuated with Mumei or seeing some kind of Chosen-One-like potential in him. Or possibly both.

This might be another step toward eventually showing that Haku’s pen can be used as a cheating device. Or the author might just have gotten tired of having people crushing on the opposite sex and decided to add some variety. The shop guy is featured in the credits, so he’s probably going to be back for some reason in the future.