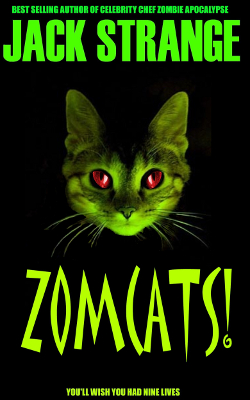 Jack Strange: Zomcats! “President Doughnut has built a wall to keep the Mexicans out of America. But can he keep the zombies out too?

Desperate for help with his “zombie problem,” Doughnut flies out to see the British Prime Minister.

Thanks to Henderson, the original zomcat, Doughnut’s visit becomes more eventful than he could ever imagine.

Will ‘The Doughnut’ leave Britain in Air Force One or in a body-bag?

ZOMCATS! Is a satirically dark humour littered with blood, horror and gore.

Zomcats! When their nine lives are up they claw their way back from the dead!

“Jack Strange writes as though he’s on a mixture of speed and catnip!” – Kensington Gore”