The Drake Equation is a hilarious sci-fi adventure with just the right mix of heart and humor. 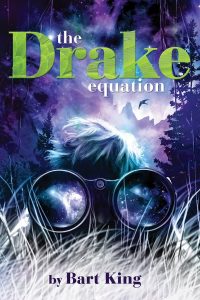 Bart King used to be a middle school teacher. He has sold 500,000 copies of his nonfiction MG/YA humor books. I’ve been a middle school teacher. I can’t say from experience, but I’m guessing selling 500,000 books is better. In May, King came out with his first novel, The Drake Equation, published by Disney Hyperion. King is also the author of The Big Book of Superheroes.

Noah Grow is a bird-watcher. If you’re picturing some kid in a big floppy hat, peering up into trees through giant binoculars . . . well, good job. That’s exactly what he does. Right now, Noah is on a quest to find a wood duck. According to his calculations, aka the Drake Equation, the odds are good – really good – for spotting one.

That’s why he gets off the bus at the wrong stop. And that’s how he ends up running down a hill, crashing into a fence, and landing right next to a strange, glittery disk.

Noah and his best friends, Jason and Jenny, soon discover that the mysterious disk is, well, mysterious. It gives Noah peculiar powers. As things go from odd to outrageous, Noah is swept up in a storm of intergalactic intrigue and middle-school mayhem. There’s much more at stake than Noah realizes.

Bart King delivers a hilarious sci-fi adventure with just the right mix of heart and humor that will have readers looking out for birds-and strange alien objects.

AMAZING THINGS: Before the Flood Streaming for Free

Harvey and Hunt are back with more rewind episodes of H2O. Tune in for a new episode later today!

Part Two of the Art of Covers

Who is DOC SAVAGE?