Aaron. R. Allen has an engrossing sword and sorcery story to tell. 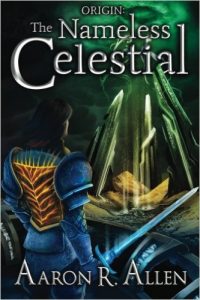 The Nameless Celestial, a sword and sorcery epic by Aaron R. Allen starts with our key character, Ranger Chief Cahan Devlin, and his band of warriors aboard an airship. A faint tug on the craft entices Cahan onto the upper deck to investigate. There he comes face-to-face with a monstrous creature known as a bone skipper trying to batter its way into the craft. Quickly arming one of the ship’s spellcraft weapons, Cahan fires off a shot and wounds the creature, before finding himself fighting desperately hand-to-hand with the nightmarish beast. This scene sets the pace; we are quickly drawn into a tale brimming with warriors, demons, gargoyles and a goodly mix of many other races – all embroiled in a massive war.

A lack of backstory means readers could find themselves struggling to follow exactly what’s happening, and why, in the early stages of this novel. There are hints at Cahan’s earlier life aboard another such aircraft, and we soon find ourselves being told of an island besieged by “Amalgram incendiary forces” – yet there’s little explanation as to what these actually are. This fuels my fear that many readers could quickly become confused, and to lose readers like this would be a shame because this tale is a good one and it deserves to do well. Readers who stick with it will soon find themselves engrossed, for it has a lot to offer. I, for one, very much enjoyed it and liked how the author turns tradition on its head by having humans and demons becoming allies, not to mention how corrupted soil feeds on the fallen.

Dragons, bereft of their wings, raise their ugly heads and quickly join the fracas, and one wonders why Cahan regularly becomes so enraged. Why is Cahan’s body tattooed in mystical runes, his body so deformed he’s ashamed of it and, furthermore, why is the conjurer Bardon so adept and powerful for one so young? Cahan learns of the enemy demon Anaymous’s desire to defect to his side and that supposed comrades of his intend to prevent it. Cahan and Anaymous join forces and the team then plunges into the story proper.

Published by Melange Books, Aaron. R. Allen has an engrossing story to tell. Yes it’s one that would benefit from the aforementioned back story and perhaps tighter editing in places, but readers will enjoy this tale and quickly find themselves lost in Aaron’s world.

It’s my belief that as the writer develops his craft he’ll rapidly develop a following, and lovers of the genre will wait impatiently for further books in the same series.

This week, Steve looks at Wildside Press’s attempt to reprint most of the SF of the past in ebook format. This particular book is works by Cyril Kornbluth, a name you should learn!

Crossroads: Negotiating the Unreal in Magic Realism and Fantasy