Casefile: Arkham – Nightmare on the Canvas 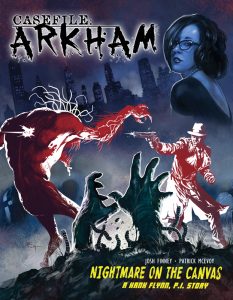 (01 Publishing) by Josh Finney (Author), Kat Rocha (Editor), Patrick McEvoy (Illustrator) is a graphic novel which mashes together film-noir with Lovecraftian horror – and does so rather brilliantly.

Intended as an ongoing series of graphic novels, each installment of Casefile: ARKHAM will follow Detective Hank Flynn as he peels back the thin veil of reality to confront H.P. Lovecraft’s most enduring horrors. The second volume, Her Blood Runs Cold, will be out soon. I look forward to checking it out; picking up the first book in the series will certainly inspire you to do likewise.

Each book will function as a stand alone story so readers can read them in any order, much like the pulp detective classics.

The story takes place in Lovecraft’s haunted Arkham in the 1940s. Our anti-hero, war veteran turned detective Henry Flynn, is hired by a beautiful and rich widow to locate a missing artist called Richard Pickman.

As if one femme fatale wasn’t enough Flynn seeks help from a pretty dame who runs a bookshop and who happens to have magic powers. He gets involved in a serial killer case, which leads to some pretty unpleasant encounters with a slew of slimy Cthulhic (is that even a word?) monsters – and some monsters of the id, too…possibly brought about by a severe case of post traumatic distress disorder. 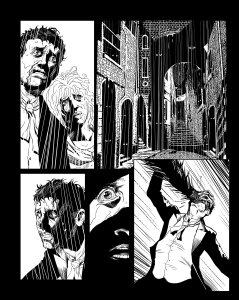 Graphically the black and white art is outstanding, with the “real” world depicted in minimalist line and chiaroscu light and shade (very film noir) while Pickman’s paintings are rendered in highly detailed and textured penwork reminiscent of the famous 19 century American artist Franklin Booth.

The main characters seem to owe something to film noir in another way: Flynn reminded me very much of Robert Mitchum, while Mrs. Pickman has shades of Veronica Lake or Jean Tierney. Apart from a slight unevenness in characters’ faces (they did not always look the same throughout) – a minor point, I realise – the characters were beautifully created, vivid and plausible. I also loved the dialogue; as snappy, wry and acerbic as one could hope from the best hard-boiled detective story.

All in all, a terrific read, and another great addition to the 01Publishing family.

Some fans don’t like old black-and-white movies. This one, while not without a certain charm, may be part of the reason. Or not… you decide!