Home Fantasy Not the Times Table You Learned In Grade School… 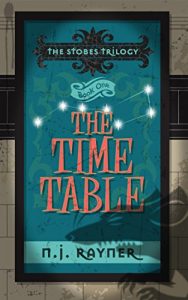 Man, did this book frustrate the shit out of me!

On the one hand, there is a lot to admire in the craft of N. J. Rayner’s The Time Table. On the other hand, there are fart jokes. And I don’t mean one or two here or there: fart jokes, which make up a substantial amount of the humour in the book, are strewn throughout.

About a third of the way through The Time Table, I decided that this book was aimed at eight year-olds. But…towards the end of the novel, there is a short scene which pays homage to the film Blade Runner. Umm, okay, it’s possible that an eight year-old would have seen that film. Again but, though, a few pages later is a line taken from the film Apocalypse Now.

Honestly, what is the audience for a book that combines references to Blade Runner and Apocalypse Now with copious amounts of fart jokes?

The Time Table is the first book in The Stobes Series. What are stobes? They’re creatures who live in the abandoned tunnels and stations of the London underground. They seem to be based on different animals, although they all have human characteristics. In addition to the stobes, there are the Darkenbads, similarly anthropomorphic animals, but dark in nature where the stobes are carefree; the Cribbit Snocklers, albino bats who trade in information and enjoy a good spot of mayhem; and, the Brolley Cats, a group of female felines who carry umbrellas.

The underground world of the novel (which is based on facts about London’s abandoned underground tunnels and railway stations) is impressively built, with a lot of credible detail that makes the setting come alive. The non-human characters are well delineated; each has a unique look and set of personality quirks (not a bad thing considering that there must be 15 to 20 characters whose actions are significant to the story), and their interactions are believably complex.

Too bad the same care wasn’t given to the human characters. There are two police officers, for example, who would have been largely interchangeable if not for the fact that one believed that something strange was going on and the other was skeptical. Worse: the main female character is made fun of for her weight and appetite for food, which I found more offensive than funny.

The story centres around a stone table that the stobes find. Early in the novel, one foolishly fiddles with it, which causes it to vanish, only to appear in a (now mostly destroyed) tool shed. As it is fiddled with and travels around London, the stobes and Darkenbads give chase. Neither group knows exactly what the table is or is capable of, but it seems clear that is powerful, so both want it.

Another problem with The Time Table is that the reader doesn’t know, either. By the end, I wondered where the table had come from, who had made it, and why. (I also wondered how the stobes and Darkenbads were created and sustained their numbers; since they were made up of a variety of different animals, it is unlikely that they could reproduce.)

Granted, because this is a trilogy, it is possible that these questions will be answered in the remaining two books. Usually, though, some questions are answered in the first book so that readers can be satisfied that they have a basic understanding of what happened. When so many questions are left unanswered, the reader’s reaction is more often mystification and dissatisfaction. That was certainly this reader’s reaction.

Also: it’s a minor note, but I assumed from the title of the novel that the table would somehow be involved in time travel. In fact, although it was involved in travel through space, no travel in time was involved. Perhaps, because the table was destroyed towards the end of the book, this is an indication of how it will return in a future book. Nonetheless, it just makes the title confusing.