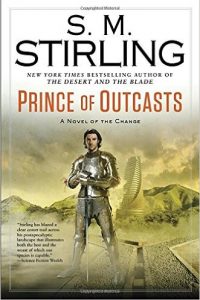 A review of the latest entry in a long-running series is probably one of the hardest to write. There is a lot of summarizing of the entire series, and even if you want to recommend the individual novel, you usually have to warn people they may want to start at the beginning of the series rather than with this specific book. Luckily, Prince of Outcasts by SM Stirling gave us something that is able to stand on its own somewhat and has taken the Emberverse series (which has already evolved from post-apocalyptic to epic fantasy) in a completely different direction.

Prince of Outcasts is the thirteenth book (not counting the various short stories and The Change anthology) in the Emberverse series, where high technology catastrophically failed in 1998 and our heroes (and villains) fought to survive in the changed world. Our story takes place shortly after the events of The Desert and the Blade. Our primary point of view character has switched from Órlaith, Crown Princess of Montival, to her younger brother, John Arminger MacKenzie. He was on the Tarshish Queen when Reiko, the newly-minted Empress of Japan, used the “Grass Cutting Sword” to call a kamikaze to drive a Korean fleet (crewed by the mad descendants of what was once North Korea) away from the shores of Westria (f.k.a. California).

John did survive the divine wind, but his ship is being driven southeast across the Pacific by the surviving Koreans. His luck changes when a forty-foot long saltwater crocodile (whose Wikipedia article convinced me that I probably won’t be visiting Southeast Asia or Australia anytime soon) takes out one of the Korean ships and helps even the odds. Still the Tarshish Queen barely escapes the enraged reptile and has to find dry land fast or else it’s to the bottom of Davy Jones’ locker for the crew. They stumble upon an island of the former Indonesia where two city states are locked in a war of survival. One is a colony of Balinese people, known as Baru Denpasar, who were forced to leave their starving homeland. The other is a colony of pirates who call their city “Carcosa” and are ruled by the “Yellow Raja”, pirates who found something very disturbing in the interior of the island.

Because the Carcosan navy would catch them if they tried to leave, John and his allies need the help of the Baru Denpasar, but they will only help if the foreigners (and, more importantly, their catapults) help destroy a Carcosan fort that is sitting on their main water source and threatening them with famine. With the additional help of an Australian princess/adventurer (who dresses like a character from A Clockwork Orange) and her crew of scoundrels, John will lead an army into the interior to face the dangers that await them there. Meanwhile, Órlaith and Reiko deal with the aftermath of their adventure to reclaim the Grass Cutting Sword and prepare for the coming war against Korea.

If all this sounds confusing…it is if you haven’t read the first books, but stick with me to the end of this review and I may give you a reason to start reading some of them if you haven’t already. I now firmly believe you can probably get away with starting with The Golden Princess (book 11) instead of beginning all the way at Dies the Fire. Why? Because Stirling has decided to mess with our minds by taking this epic fantasy and pushing it into the realm of weird fiction.

You see in the Emberverse series, the question of whether magic exists was left ambiguous in the beginning, but became increasingly more real…and complicated. I will not try to spoil anything, but it was strongly implied that every religion (even atheism) was correct. Additionally, Stirling loves to reference other works. For example, Lord of the Rings references abound in the Emberverse and they are not the only references that Stirling makes. We even see two characters who died in John Birmingham’s Without Warning series (another set of awesome high concept books) actually live much longer and wealthier lives in a Darwin, Australia ruled by Birmingham himself. I’m sure there are many other references I missed, but there is a more important reference that we need to talk about.

Speaking of Lord of the Rings, in the Rudi/Artos story arc that precedes Órlaith’s arc, the main antagonist appears to be influenced/possessed by a dark entity that reminded me strongly of Sauron. As Órlaith’s arc began it appeared at first that the Sauron entity would continue to be the main malevolent force which her father, Rudi, opposed. Which was…disappointing. I didn’t want to admit it at first because I have been so invested in the Emberverse series from the beginning, but even with new human agents, the same evil god just didn’t do much for me even if I continued to enjoy Stirling’s world-building and food porn (which is still strongly present in this book).

Then Prince of Outcasts came along. Some of you who were reading my plot summary carefully may have noticed terms that could be found in Robert W. Chambers’ The King in Yellow. Admittedly, I have never read the book, but I know its an esteemed piece of supernatural fiction and inspired the first season of True Detective. I kind of wish I had read the book earlier because it appears that “King in Yellow” or whomever he represents, will be a major force in the upcoming books. Aspects like a recurring mark, the masked sorcerer, a fortress built of coral, a ship that can’t be named and the fact that no one can really look straight on at the city of Carcosa without going insane had a strong Lovecraftian vibe, and the ending of Prince of Outcasts was (without spoiling it) creepy and disturbing…and I desperately want to read more.

You see the Emberverse is like reading your favorite book over and over again. You still enjoy it, but each successive reading isn’t as good as when you first read it. Prince of Outcasts is what happens when an eldritch beast grabs the hero and spirits him away right before he is supposed to save the world and get the girl. You know that wasn’t supposed to happen, but you really want to see where this is going. If you haven’t started reading the Emberverse yet, I think you really should check it out because it appears Stirling is taking our heroes down a dark and disturbing road and I think the series will be better for it.