In this week (and last week)’s viewing: Time to catch up after last week’s break, the surprise end of Re: ZERO, and more! 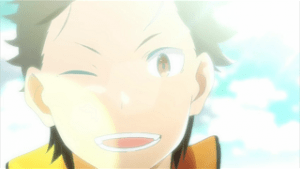 Re: ZERO – Starting Life In Another World #24 and finale

It’s an early end for Re: ZERO, winding up with a bonus three minutes so that it can finally run a full closing theme again, even if it’s actually the one from last season. No problem, I liked that one better anyway.

Betelgeuse and his henchpersons have to be defeated all over again one last time, and then once again because Subaru and Julius came up with a great strategy but it didn’t quite take, and after one last complication, Subaru can finally deliver a full and unconditional apology to Emilia. And he nails it.

Many are the stories where the hero has become a better person through his adventures, but merely has to muse to himself about the lessons learned. Here Subaru has had to put them into practice and make up with those he has wronged. He has to articulate to Emilia exactly how he screwed up and how he is going to not screw up in the future.

There are some points where the nearly inevitable continuation could improve; of particular concern is how Subaru’s resets have served to keep wiping out Emilia’s heroic moments. But, coming from a genre which has lately preferred to valorize jerkish behavior, Re: ZERO is nothing short of a miracle. I highly recommend this to any anime fan tired of light-novel tropes, and eagerly await more of the story. 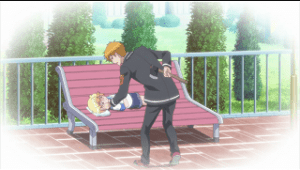 The Beppu brothers’ man-crush on Gōra, it turns out, dates back to a fateful day at a theme park with a mouse mascot and a live show that got a little too real. After telling the story of how Extreme Gorar saved them from a canned-lobster monster and became their hero, they decide to finally take direct action and steal back to Andromeda with Gōra sealed in a glass coffin straight out of the Disney version of Sleeping Beauty.

To get him back, the Battle Lovers have to apologize to their enemies for ignoring them, then defeat them in a pop-idol battle where likes on Alien Facebook become deadly weapons. And then Zundar and the Caerula Adamas reappear, because hey, why not? I thought the student council had been sent to Andromeda in the same exchange program that brought the Beppus to Earth, but no, it appears they went to Victorian England instead.

Cute High has gotten more meta than ever in these last couple episodes. This is definitely working up to delivering another message about the entertainment industry in the final episode, same as it did last season. 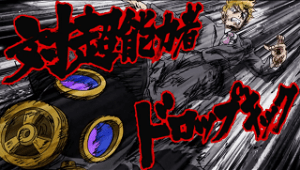 Arataka Reigen is simultaneously an unethical slimeball and the best person in this story. Even Mob, Teru, and Dimple working together have met their match in Claw. But Reigen is able to find the Claw division HQ, bluff his way in, lose them most of their ground-level henchmen, and temporarily defeat half their elite before they finally manage to start fighting back. And he manages all that before he even understands what’s going on.

But once it is all explained, he’s the first to understand that what needs to happen right now is to keep Mob from committing mass murder. He also has an interesting insight into the nature of Claw: that they’re less susceptible to his tricks because they’re overgrown children. (It’s entirely true, by the way, that the sort of trickery used in psychic scams is much more effective on adults.) I think he means that literally – that even the adult-looking Claw members are, chronologically, still kids. 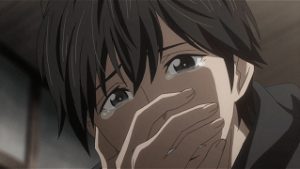 After all the work Naho and her friends have done, it falls apart in one moment when Naho doesn’t know the right thing to say. But this time, she doesn’t give up. She finds her assertiveness and keeps trying to approach Kakeru. When he’s able to deflect her, she changes strategies and plans something for Valentine’s Day.

But a look at Kakeru’s final months in the original timeline shows that what precipitated his suicide was an event no one else knows about, and is likely to happen sometime in the new timeline regardless of what anyone else does. The best that can possibly happen is that Naho can get closer to Kakeru in time, so that he has someone to talk to about it.

In the original future, it turns out that the plan to send the letters back in time is to drop them into the Bermuda Triangle in the hope that they fall into a black hole and magically find their way to 10 years ago. Okay, I hope that’s the author just joking, and they come up with a slightly more scientifically sound plan. If not, then I’d rather there hadn’t been an attempt to explain the mechanism at all.

In some ways, we’re already preparing ourselves for living in the future.

Many editors reject heavily stylized prose out of hand. Lackington’s welcomes it.

“Will people be in costume?” How mainstream media sees SF fans.