Greenwode, Shirewode, and Winterwode by J. Tullos Hennig take readers back to the medieval period, retelling the familiar tale of Robin Hood with just enough twists to give the age-old legend a fresh new perspective.

The legend of Robin Hood arose from the folklore in poems and ballads in the middle ages; its predominant theme revolved around the seemingly mythological hero’s montage of stealing from the rich and giving back to the poor. And though Hollywood has presented many variations of the character over the years, few have delved into how such a champion of the people evolved. Until now. 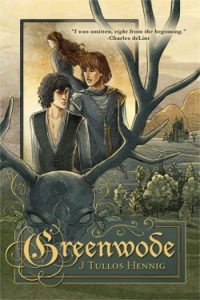 In a reinventing of the lore, author J. Tullos Hennig has taken her passion for history and mythology and created a new fantasy world in the Books of the Wode series. From DSP Publications (an imprint of Dreamspinner Press, international publisher of LGBTQ works), the first three Wode books Greenwode, Shirewode, and Winterwode take readers back to the medieval period, retelling the familiar tale of Robin Hood with just enough twists and turns to give the age-old legend a fresh new perspective.

In Greenwode (pub Oct 2014 by DSP – 1st Edition from Dreamspinner Press Jan 2013), we find the usual suspects, Robyn, Marion, and even the high Sheriff of Nottingham. But unlike the traditional lore, this story goes beyond the social economical conflict between classes and takes a more direct approach by exploiting the religious ideologies of the period and the influence they had on the social growth (or constraint) of the region. 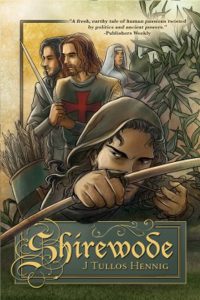 The story also relies on a unique twist with the introduction of the heroic outlaw Robyn and his traditional love interest Marion as siblings. This skillfully executed approach of these two “new” characters by the author works well from the beginning, adding to the emotional development of the duo. On a more personal level, Robyn’s love for the young Gamelyn who will later become the outlaw’s most notorious archenemy is what brings the true conflict of faith and loyalty to the forefront and gives readers plenty to think about as the story progresses.

In Shirewode (pub Jan 2015 by DSP – 1st Edition from Dreamspinner Press Sept 2013), the characters from the first installment have taken differing paths and the new story becomes more of an identity conflict as duty and honor converge. In Winterwode (pub Oct 2015 by DPS), the initial conflicts still linger in the hearts of all of the primary characters, but the adventure moves on from the first two books. taking more of an “epic” feel as it becomes evident that this series has the potential for many more installments. Fans will be pleased the hear that a fourth book (Summerwode) is in the works for next year. 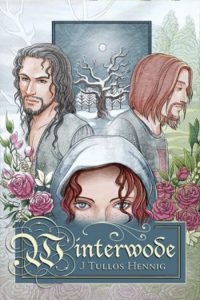 All three books seem to stumble on occasion as detailed descriptions of religion sometimes cloud the development of the characters. But it is through these deep-rooted characters that readers will get a better grasp of the social conflicts the author is drawing from, so trekking through the occasional lull is well worth the effort.

What stands out most in all three of these books is the intricate diction of the primary characters. The language is comfortable to read and gives authenticity to the period. I’m not a language expert or history snob, but the dialog gives way to the emotion, tension, and sometimes humor with just enough fluency to feel legitimate, while the dialect does not distract the reader from the tone of the story.

Depending on your stance on folklore, Greenwode, Shirewode, and Winterwode by J. Tullos Hennig can all fit comfortably under the genre umbrellas of Fantasy, Romance, Historical Fiction, and even Alternate History. Given the author’s innate ability to take classic lore and make it new again through works of fantasy, fans of other genres or literature in general are sure to enjoy these works as well.

Speculative fiction gives my imagination space to play. Whether it’s a strange, fascinating city, an entire alien world, or a different time/reality, the genre’s ability to transport offers both escapist entertainment and the insight into our own existence that only a skewed perspective can provide. This capacity isn’t unique to speculative fiction. Even the most […]

This week Steve reviews three newer books: one is outstanding and the other two are worth reading. What’re the odds on that?

Steven Soderbergh’s Contagion. It should really have caught on