Worried that an asteroid will hit the Earth? As Andrew Weston reports, NASA has some good news and some bad news on the subject of a near earth object called Bennu.

Not to cause alarm, but NASA is planning to launch a probe as soon as it can to collect rock samples from an asteroid it fears could one day hit Earth.

Scaremongering? The scene from a film, perhaps? No, this is for real: the name of the threat is an asteroid called, Bennu.

Bennu is an Apollo Asteroid (a near-earth object) discovered by the LINEAR project on September 11, 1999. It measures in at just under 500m in diameter at its equator, and travels around the sun at 63,000 mph. The thing is, it actually crosses Earth’s orbit every six years and can be seen in our night sky quite clearly. Bennu is termed a Potential Earth Impactor, and is listed on the Sentry Risk Table with the third highest rating on the Palermo Technical Impact Hazard Scale. 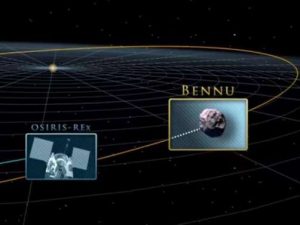 The target of the OSIRIS-REx NASA mission in 2023, Bennu will be monitored closely to see just how high the probability will be that it could impact the Earth. Why? Because in 2135, it will actually pass between Earth and the Moon, and gravitational influences will tweak Bennu’s orbit, potentially putting it on course for the Earth later in that century.

Said  Dante Lauretta, professor of planetary science at Arizona University: “It may be destined to cause immense suffering and death.”

Prof Lauretta, NASA’s principal investigator in charge of the OSIRIS-REx probe mission to Bennu, launching in September 2016, said the probe will primarily map the asteroid, pick up some rock samples and then head back to Earth. But, while it’s there, it will collect vital data on the asteroid’s size, mass and composition. Details we might need if we’re forced to take action at a later date. 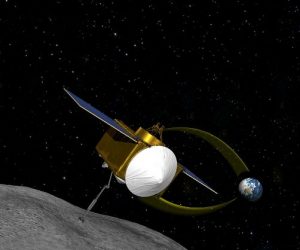 OSIRIS-REx will arrive at Bennu in 2018 and will spend a year surveying the asteroid’s chemical makeup, mineralogy and geologic history. Information gathered during that time will help scientists understand how its course, and hopefully that of other asteroids, is affected by absorbing and radiating sunlight as heat. Once it has what it needs, it will head back to Earth, arriving in 2023, giving us plenty of time to assess what 2135 might bring.

Good news indeed, and no reason for us to start feeling like the dinosaurs did 65 million years ago.

Everything has its uses, even space junk

Humans need never be jealous of spider monkeys ever again